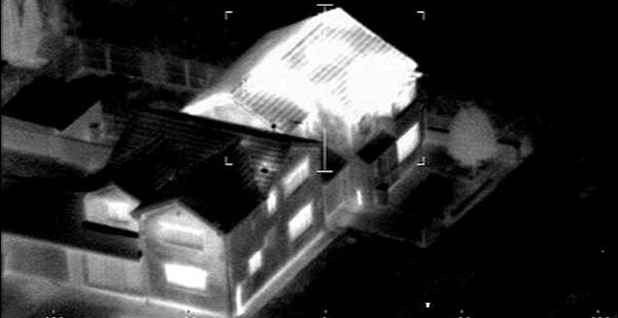 A clandestine marijuana "grow house" is revealed by an aircraft carrying a forward-looking infrared camera that reveals the enormous amount of heat escaping through its roof. The heat is generated by batteries of 1,000-watt lights used to grow larger crops of more potent plants. Photo courtesy of the Drug Enforcement Administration.

First of a two-part series on the carbon and energy footprint of Colorado’s marijuana industry. Click here to read the second part.

DENVER — Last year, a task force involving multiple federal, state, county and local law enforcement officers descended on two tiny rural towns in southern Colorado, where they seized a small arsenal of guns and $25,000 in cash and arrested 17 people. They also hauled away products of what may be the most energy-intensive industry in the United States: 1,000 genetically modified marijuana plants, some of them the size of small trees.

The team involved in the Sept. 1 drug bust, led by the Drug Enforcement Administration, was probably larger than the entire 47-person population of Cotopaxi, where most of the action took place. It was the result of three years’ worth of sleuthing around hidden, indoor marijuana-growing operations.

Some of the most damning evidence came from the local electric utility that showed electricity use at the nine homes involved had multiplied by as much as 225 times after the pot growers had bought them.

Growing pot is legal in Colorado, but the case revealed a rapidly expanding movement to grow more of it indoors to get more frequent harvests and a more potent product. It also shed light on some lesser-known issues, including electricity theft, the proliferation of fire hazards in neighborhoods with rented "grow houses," and evidence that soaring use of electricity to grow pot is a factor in driving CO2 emissions up and not cutting them as the state’s leaders have pledged.

"We have an ongoing dialogue with utility companies," explained Kevin Merrill, assistant special agent in charge of DEA law enforcement efforts in Colorado. "They can tell you that the number of large home grows is way beyond what anyone has expected."

Colorado has already licensed over 1,200 indoor growing operations, but the actual number could be considerably larger than that, said Merrill, because a number of growers steal electricity by tapping incoming power lines before the electricity reaches the meter.

In cases like the raids on Cotopaxi and another nearby farm town, Westcliffe, the DEA has found homes and outbuildings that had monthly electricity bills below $100 rewired to raise the bills as high as $3,000 — often by do-it-yourself electricians. Some utilities, eager to sell more electricity, approve an upgrade in service for free. Others, according to Merrill, have recently decided to charge for it.

"We’re not the police, and we don’t concern ourselves with what people do with our electricity," said Paul Erickson, CEO of Sangre de Cristo Electric Association Inc., the small rural electric cooperative that services Cotopaxi. He admits, however, that he was shocked by the rifles, shotguns and handguns possessed by the gang discovered during the raid on the grow houses. Most of those arrested came from either Cuba or Mexico.

"The whole thing is really quite scary," he said, referring to the potential danger to the utility’s workers.

While it is legal to grow marijuana in Colorado, it remains illegal under federal law. The Justice Department, however, has issued a memo that defines when it might move in. One of them is that the business should not be associated with the possession of firearms. Another is that the marijuana should not be shipped to another state.

The DEA task force found that trucks carrying black duffel bags of dried marijuana from Cotopaxi were taking it to Florida or delivering it for shipment to UPS stores. Then it pinpointed the grow houses by getting subpoenas for the electricity consumption records at Erickson’s utility.

The law enforcement officers seized 1,211 pieces of marijuana-growing equipment, including the most vital components, which are the specially designed 1,000-watt bulbs, ballasts and fluorescent lights that illuminated the grow houses night and day with the fierce brightness of hospital surgery rooms. The new hybrid marijuana plants require that, but they’re finicky about the excess heat the bulbs produce, so grow houses must be equipped with powerful air conditioning systems, fans and venting systems to keep temperatures between 77 and 90 degrees Fahrenheit.

That’s not the end of the energy needs. Water trucks arrived on an almost daily basis to feed the ever-thirsty plants in Cotopaxi. And in many of the grow houses, raiders found natural gas burners operating. According to marijuana experts, they’re used to giving the plants an extra shot of CO2 to make them grow faster and develop more potency.

According to Merrill of the DEA, it costs between $30,000 to $50,000 for renters to equip an average house for growing marijuana.

"That’s why some of them do engage in stealing power because that’s one way to cut down their costs," he said. Some of the grows are huge. "When you open the doors, you can’t see the other end because they’re just thick with plants that are 6 to 8 feet tall and 3 to 4 feet wide. In densely populated neighborhoods, it’s not uncommon for growers to rent three to five homes in a neighborhood, which will tax the local transformer."

When electricity for grow houses is stolen, utilities may not have records tracking spectacular spikes in electric use to a specific customer, but DEA has other means of spotting grow houses. In amateurish operations, they notice windows blacked out and air vents crudely carved into houses and garages for cooling. When it snows, rooftops of grow houses stay dark. And in difficult cases, DEA uses planes equipped with forward-looking infrared cameras that display the massive cloud of waste heat escaping from rooftops as a bright glow that shimmers above the whole roof.

Merrill blames a loophole in what he calls Colorado’s "poorly written" medical marijuana law that is being exploited to create the huge indoor grows. Some growers can get a doctor’s permission to grow 99 marijuana plants, which is just one plant under a threshold that could trigger a federal investigation. Then, if the patient can show that he or she is also a caregiver for as many as four other adults who live in the house who have problems that require marijuana treatment, the grower can raise up to 495 plants.

The size of the grow then becomes a major frustration for law enforcement officers, who call them "ninety-niners." If officers locate the house and find approvals for 495 plants, Merrill explains, "they turn around and walk out because there’s no violation of the state law."

But sometimes the combination of huge energy demands and big changes in internal wiring will provide a clue by burning a grow house down, as happened in one $700,000 house in Larkspur, a suburb of Denver, in January. The fire threatened to ignite a nearby forest, a risk that the neighbors still worry about.

At a crowded meeting at a local firehouse several days after the fire, which was recorded, neighbors complained that cars pulling U-Haul trailers and package delivery couriers sometimes made pickups from the house at odd hours, that the renters were secretive and spoke only Spanish, and that local police only realized it was a marijuana grow house after it burned down. They also complained about the loophole in the law.

"It doesn’t set well with me, either," explained Steve Johnson, chief deputy of the local county’s sheriff’s department. He said the investigation of the fire has yet to reveal the cause, but the renters had documents showing that the marijuana plants growing in various parts of the house were covered by medical permissions from doctors.

Johnson said the renters were not required to notify him. Neighbors might have helped law enforcement officers find the house by reporting changes, such as the package pickups, but they didn’t. He handed out cards with his email and phone numbers at the meeting.

"Thank God this didn’t happen in July," he told them, referring to Colorado’s dry season, when a forest fire would have been more likely.

"If there’s a bottom line to this, it’s take back your community," he told the crowd. Asked later about his remarks, he noted that if he had received a tip about the unusual package pickups or signs of ambitious electrical work underway at the house, he would have asked the county to make sure building codes were being observed.

"The neighbors’ fears are very legitimate," he said, noting that elements of the Larkspur case are still under investigation.