Come to work next week — Wheeler 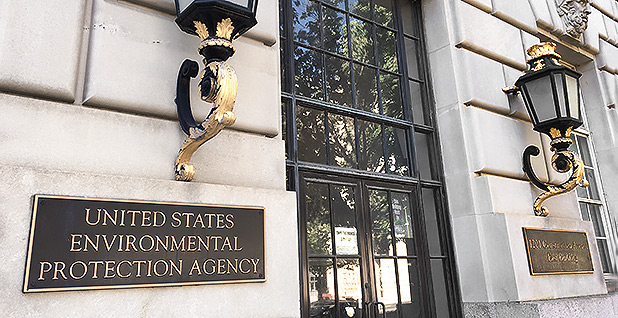 EPA will be open next week, even if government funding runs out tonight.

Acting EPA Administrator Andrew Wheeler said in an internal email obtained by E&E News that the agency has enough funds left over to stay open. The federal government will undergo a partial shutdown heading into the holiday break if Congress does not approve new spending by midnight tonight.

Wheeler said EPA’s contingency plan for a shutdown requires the agency to assess whether it has enough "carryover funds" to keep up operations if appropriations lapse.

"We have done that assessment and determined that EPA has sufficient carryover funds to operate for a limited period of time," Wheeler said in the email, which was sent to staff late yesterday afternoon.

The acting EPA chief said the agency will remain open next week in the event of a shutdown. Agency employees should follow their planned schedules for the week, with Wheeler noting there are holidays on Dec. 24 and 25 — Christmas Eve and Christmas Day. Come Friday and if new funding has not been passed by Congress, EPA will update employees again.

"Should the shutdown remain in place through December 28, 2018, we will provide further updates on the agency’s operating status," Wheeler said.

EPA under the Trump administration has turned to carryover funds in the past to keep the doors open during prior shutdowns. Former Administrator Scott Pruitt also told employees that the agency would rely on leftover money when government funding lapsed in January and again in February this year.

Under EPA’s shutdown plan, which it updated earlier this week, 13,705 employees across the agency’s headquarters and 10 regional offices are "exempted." They will depend on carryover funds to stay operational during the shutdown.

"Excepted" employees at EPA are numbered at 753 and are deemed necessary to protect life and property under the plan. Those staff would continue to report to work, even if the agency were fully shut down.

Some of that excepted work at EPA would include keeping up operations at toxic waste sites under the Superfund program that could pose "an imminent threat to human life." Personnel would also check on freezers and test animals at EPA’s 29 program and regional laboratories. The agency would also have some emergency response, law enforcement and legal staff at work even during a shutdown.

The agency’s internal watchdog, the EPA Office of Inspector General, however, is expected to shut down during this funding lapse.

EPA IG spokeswoman Tia Elbaum told E&E News that 249 employees in the watchdog office will be furloughed during the shutdown. A small number of staff would remain on the job.

"Criminal investigators that have a case in judicial action with the Department of Justice would be approved to work as ‘excepted’ employees," Elbaum said.

"Only 17 ‘exempted’ employees would still work," she said. "These employees are needed to perform duties required for the orderly suspension of operations or for the performance of excepted or approved exempted activities."

Once EPA finds it has run out of carryover funds, it will then proceed with shutting down the agency. That would include suspending travel, stopping paychecks, and halting any new hiring or contracts. Furloughed employees would also have to secure their workstations and then return home.

On Wednesday, the Senate passed a stopgap spending measure to keep the government open until early February. But yesterday, House Republicans passed that bill with $5 billion included for a border wall at President Trump’s urging. Democrats have pushed back against funding the wall, and the latest bill seems unlikely to pass the Senate.

Congress has already passed funding for most agencies for fiscal 2019, although not a spending measure supporting EPA and the Department of the Interior. Interior is expected to keep up some services but on a limited basis during a partial shutdown (see related story).

The Department of Energy, however, would not be affected by this shutdown (see related story).

Other federal employees are not so lucky. Even though this would be a partial shutdown, some 400,000 government workers will be furloughed and go without pay over the holiday period. Reps. Don Beyer (D-Va.) and Rob Wittman (R-Va.), who represent 120,000 federal employees in their districts combined, have introduced legislation authorizing back pay for furloughed workers.

A shutdown could stretch into next week, if not until the new Congress convenes Jan. 3. Trump is predicting a long shutdown if lawmakers don’t approve funding for the border wall.

"There will be a shutdown that will last for a very long time," the president said in a tweet this morning. "People don’t want Open Borders and Crime!"