Commerce nominee could have energy conflicts 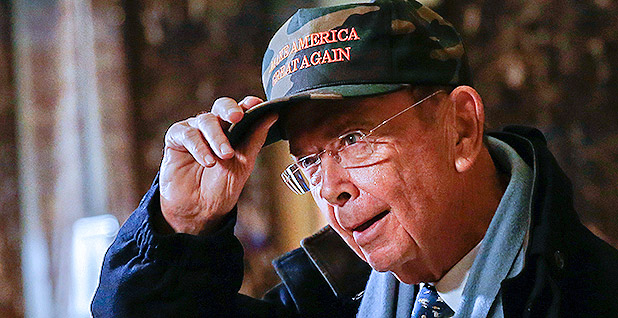 Billionaire investor Wilbur Ross speaks to reporters in the lobby of Trump Tower last week before President-elect Donald Trump picked him to be secretary of Commerce. Photo courtesy of AP Images.

President-elect Donald Trump has promised to revitalize the U.S. fracking industry and bring back "millions" of jobs.

And while that is a heavy, or even an impossible, lift for any politician, it has to make one of his Cabinet choices particularly happy. The firm run by Wilbur Ross, Trump’s pick to lead the Department of Commerce, has invested hundreds of millions of dollars in distressed fracking companies in recent months. Ross, 79, is chairman of WL Ross & Co. LLC, which has been buying up debt of companies foundering amid low oil prices and a market glut.

But if Ross wants to take the job, he’ll have to offload his investments in the fracking industry now or run afoul of the law, said Richard Painter, the former chief White House ethics lawyer under President George W. Bush and a professor at the University of Minnesota Law School.

"He’s going to have to dispose of any and all holdings that create potential conflicts of interest," Painter said. "The criminal conflict-of-interest statute will apply to Commerce secretary, so he doesn’t have the option."

It is a criminal offense for a Cabinet secretary to participate personally and substantially in any government matter that could have a personal financial interest, Painter said.

The Commerce secretary can have an outsized influence on the energy industry through its authority under the Trade Act, energy economist Phil Verleger said. The Department of Commerce could also limit the imports of wind turbines, solar panels or other clean energy infrastructure that competes with the fracking industry.

What’s more, Commerce can play a substantial role in boosting liquefied natural gas exports, a longtime push for the natural gas industry because it could create a boon, Verleger said. The Commerce secretary could even exercise outsized influence directly affecting the oil industry, for example, by saying that oil imports threaten national security.

"Ross could do a study saying we should not import any more oil, and the finding could be made to that effect, and the president would then ban all oil imports or impose a big duty on them or something like that," he said.

A Ross spokeswoman did not return a call seeking comment.

"Wilbur Ross is a champion of American manufacturing and knows how to help companies succeed," Trump said.

But Ross’ particular skill, according to multiple news reports, is squeezing profits out of dying or debilitated industries.

Ross, who is worth an estimated $3 billion according to Forbes, has a history of flipping distressed energy companies teetering on bankruptcy for huge profits. Ross has made a fortune buying the debt issued by distressed companies and then selling for a profit after restructuring or bankruptcy. In the past, he has invested in the steel, textile and coal industries.

About a decade ago, Ross invested in a series of struggling coal companies. In 2004, his firm bought assets of the bankrupt Horizon Natural Resources. He renamed it International Coal Group Inc. and took it public in 2005. In 2006, an explosion at the troubled Sago mine, owned by a subsidiary of one of his companies, killed 12 miners.

Despite that setback, and after combining the coal company with a series of smaller companies, he sold the company to Arch Coal Inc. in 2011 for $3.4 billion, The Wall Street Journal has reported. The deal made WL Ross about 2 ½ times its investment.

Ross sold his firm in 2006 to Invesco Ltd., an investment firm based in Atlanta. He remains as chairman and chief strategist. In 2008, he was part of a deal between Invesco and a state-owned power producer in China to invest billions of dollars in coal mines, coal-fired power plants and clean energy technology. One of the primary targets of the Paris climate accords, from which Trump has promised to withdraw, is to pressure China to reduce its reliance on coal.

As Commerce secretary, Ross will play a direct role in the U.S. trade relationship with China, which Trump has vowed to challenge.

Laughing at ‘the greenies’

In the last year, Ross’ firm has turned its attention to the distressed fracking industry, which is suffering from a market glut and low oil prices and has shed tens of thousands of jobs.

His firm has invested more than half a billion in companies hit as the price of a barrel of crude dipped from a high of more than $100 to about half that currently, The Wall Street Journal has reported. In his first video announcement since winning the presidency, Trump promised to rejuvenate the fracking industry, bringing back "millions" of jobs, in particular by focusing on rolling back the sort of environmental regulations that he claims kill jobs.

As he did with coal acquisitions, Ross patiently waited for the energy companies in which he sought to invest to plunge in value. He swooped in at the bottom of the market, which some energy experts have predicted is currently happening in the fracking industry.

Even if Ross’ assets were placed in a blind trust, a rejuvenation of the industry could lead to windfall for his investments, said Painter, the former White House ethics counsel. He said Ross needs to be careful about such conflicts of interest.

"If he wants to be Commerce secretary, he’s going to miss out on that windfall," Painter said.

And it’s not just the energy market that Ross can now directly affect. He also will oversee a primary source of federal research that the Obama administration has used to craft environmental policy.

As head of Commerce, Ross could have an outsized influence on the study of climate change. Under the Commerce Department is an unusual variety of agencies, including the Census Bureau, Patent and Trademark Office, and International Trade Administration. But it also includes the National Oceanic and Atmospheric Administration, which conducts a significant amount of research into climate change. Trump advisers have already targeted the earth science division at NASA, accusing it of conducting "politicized science" and suggested that its work be shifted onto NOAA.

Ross has already made it clear he’s not a fan of environmental regulation. In 2011, he told The Wall Street Journal he was interested in investing in natural gas companies because it was cheaper and cleaner than other power sources, such as coal. When asked if he was concerned about the environmental risks of fracking, Ross dismissed them with a laugh.

"The greenies have to learn that electricity doesn’t just live in the wall and just have to be liberated by sticking a plug in it," he said, adding, "Talk about the danger of fracking, it’s very dangerous to get in a car, it’s dangerous to walk across the street; at some point, you have to balance what’s the magnitude of the risk relative to the benefits."