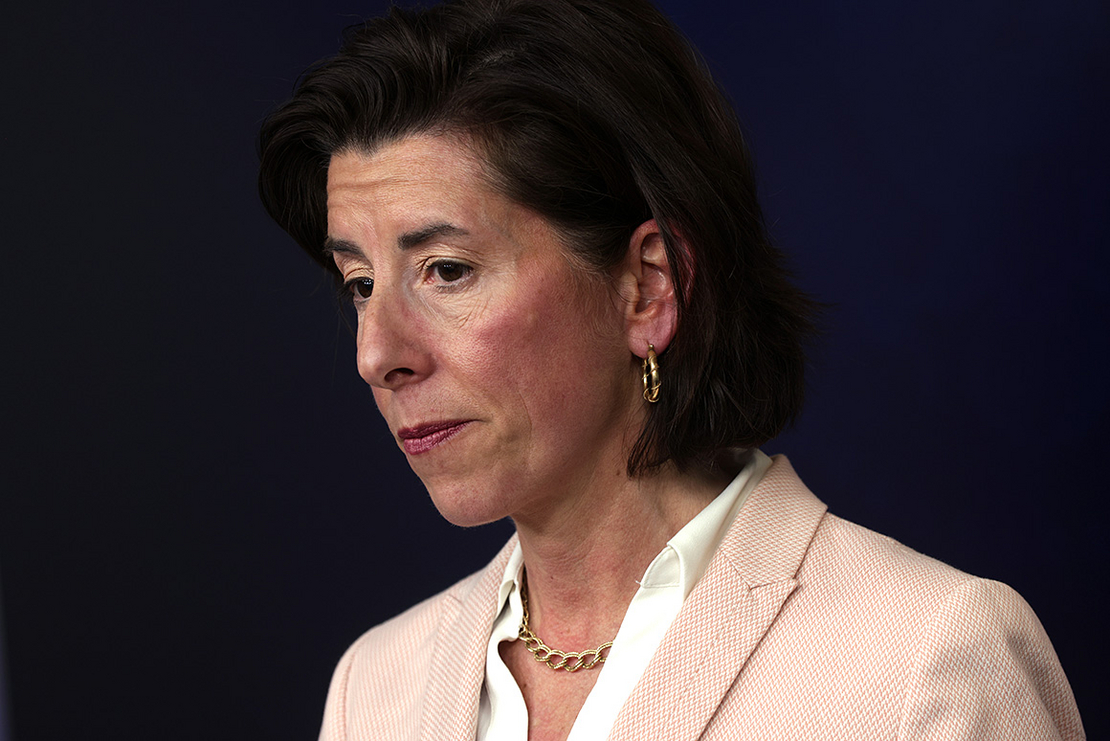 "The average electric vehicle has about 2,000 chips, roughly double the average number of chips in a non-electric car," Raimondo said in prepared remarks to the Detroit Economic Club, a nonprofit business group located in Michigan’s automotive hub.

"As companies like Ford and GM compete to grab a foothold in the electric vehicle market, we know that innovation in the American battery market will be stifled if we aren’t also investing in domestic semiconductor innovation at the same time," Raimondo said.

Prior to the speech, Raimondo also told reporters that Biden’s plans for half of new vehicles to be electric by 2030 depends on the U.S. investing in semiconductor production. "That’s necessary for our American economic competitiveness, it’s necessary if we’re going to meet our climate change goals, and it’s necessary to create jobs," she told The Detroit News.

The secretary’s Michigan visit was intended to drum up support for a $52 billion legislative package to revitalize the U.S. semiconductor industry.

The "Creating Helpful Incentives to Produce Semiconductors (CHIPS) for America Act," or "CHIPS for America Act" in short, was passed by the Senate in June as part of a bigger bill but hasn’t received a vote in the House of Representatives.

The globe’s semiconductors are mainly made in Asia, especially China and Taiwan. As pandemic lockdowns eased and the economy coughed back to life, automakers have been frustrated in their efforts to meet pent-up demand for cars. Semiconductor companies prioritized electronics companies, not automakers, for their limited supplies. As a result, nearly every automaker has experienced chip-related slowdowns and shutdowns.

The shortages have already tapped the brakes on several high-profile EVs.

In August, Ford Motor Co. told customers that a lack of chips would put off delivery of its flagship EV, the Mustang Mach-E, for several weeks, and General Motors Co. temporarily shut the Detroit factory where it makes the Bolt EV. Also this summer, Rivian Automotive Inc., the electric truck-maker, cited semiconductors as the reason for a delay, and its output remains very slow.

A spokesman for the Commerce Department said that the figure Raimondo cited — that an EV has twice the chips a traditional car has — came from discussions with automakers. "We believe it’s a reasonable average," the spokesman said.

A recent study by IDTechEx, a consultancy based in the United Kingdom, estimated that an EV requires more than twice as many semiconductors as its internal-combustion-engine counterpart, mainly because the EV demands much more use of power electronics.

An analyst said that Raimondo is correct that EVs require more semiconductors but didn’t necessarily agree that it means electric vehicles are uniquely vulnerable to shortages of them.

However, he added, "design of EVs matter and … a clean sheet approach, like Tesla, or even new platforms from GM, Ford and VW allow for greater capability and more efficient use of chips."

Tesla Inc., the electric automaker, has faced fewer chip-related production problems. Baum said that Tesla’s design requires less chips because it "has centralized computing in a single spot in the car, rather than computing spread through the various vehicle systems."

Tesla’s rivals have taken action on chip shortages by incorporating themselves into the supply chain. Earlier this month, Ford struck an agreement with maker GlobalFoundries to make chips, and GM said it would work with Qualcomm Inc. and NXP Semiconductors NV in a similar arrangement.