Commissioners ‘in the dark’ about chief of staff remarks — Glick 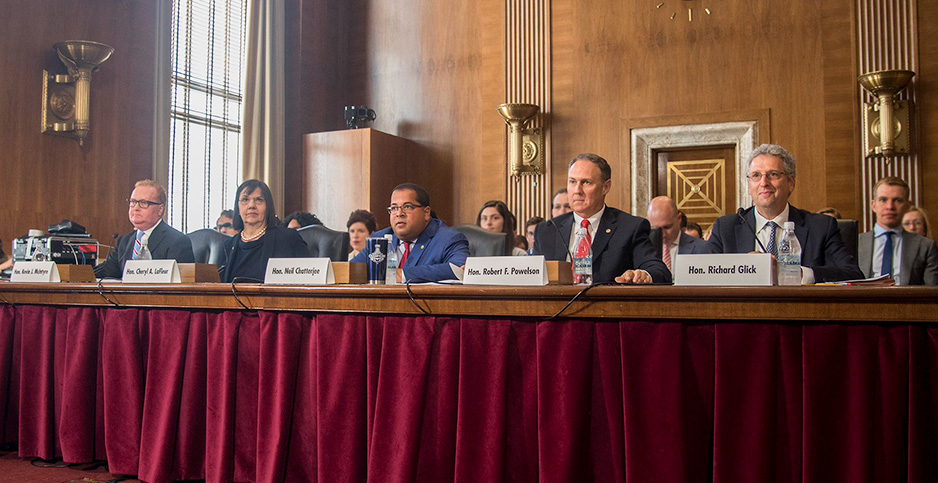 More than a week after controversial comments by Chief of Staff Anthony Pugliese, members of the Federal Energy Regulatory Commission are unaware of exactly what, if anything, the agency is doing to assist the Trump administration in identifying specific power plants deemed critical to the grid and possibly worthy of financial support.

Pugliese told a meeting of the American Nuclear Society in Florida that "we are working with [the Department of Defense] and [the Department of Energy] and [the National Security Council] to identify the plants that we think would be absolutely critical" to maintaining power on the grid in case of a man-made or natural disaster (Energywire, Aug. 14).

"None of us have been provided any information about what they’re doing," Glick said. "So I don’t know if it’s embellishment or they’re really doing what [Pugliese] said or if it’s somewhere in between. Honestly, I have no clue. I’m in the dark; we’re all in the dark."

FERC has long provided technical assistance to federal agencies on matters relating to electric reliability and the grid.

But the agency earlier this week declined to say what instruction the staff received on collaborating on identifying plants from Republican FERC Chairman Kevin McIntyre, to whom Pugliese reports.

Despite the unusual comments by Pugliese, Glick does not think FERC proceedings should be viewed as having become politicized.

"Some of the issues that we’re dealing with are much more high profile than they were in the past," he said. "I want to make a distinction between the commissioners" and others, he added.

"I don’t think any of the commissioners are that partisan. We certainly have strongly held opinions that sometimes differ," he said.

The greatest example of the nonpartisan nature of the current FERC, Glick said, is the vote on DOE’s notice of proposed rulemaking. The commission in December rejected 5-0 Energy Secretary Rick Perry’s proposal to compensate coal and nuclear plants for the stated reason of maintaining electric grid resilience.

"If the commission were really that politicized, we wouldn’t have had a 5-0 vote a month after the chairman became chairman fully dismissing the DOE NOPR," Glick said.

He said the political concerns "have been raised by some of the comments that have been made by the chief of staff."

"But I do want to distinguish between that and the commissioners because I haven’t seen — ‘this is my team and this is your team and we’re not going to talk’ — I don’t see any evidence of that," he said.

FERC has issued quite a few orders in recent months approving natural gas pipelines along a 3-2 partisan split, with Glick and LaFleur in the minority. Most often, they opposed a pipeline project because they believed the commission was not taking into account the greenhouse gas emissions from the projects.

"There’s a strong disagreement about how significant a role climate change analysis should play in the [pipeline] certificate process," Glick said.

Glick said he is "very disappointed" that FERC "has gone backward" in terms of how it addressed greenhouse gas emissions "before the chairman became chairman."

"The new policy of not taking GHG emissions into account at all — I do think that it’s badly wrong.

"But I really don’t see that as a political decision. I think it’s their view of a) their responsibilities under the Natural Gas Act and b) maybe their views on climate change. But I honestly don’t think they’re taking orders from the White House or anything like that. I haven’t seen any evidence of that," Glick said.

"I’m very hopeful," he added, "that as we get through this [notice of inquiry on FERC’s pipeline certification] process that the chairman initiated that somehow we figure out a way through this because it looks bad to have every 3-2 vote.

"I’ve been disappointed that on the other side the three people who have voted in the majority haven’t been, in my opinion, at all flexible on this issue, and they’re probably upset at me for not being flexible either," Glick said.

But "the commission is in fact creating greater uncertainty" with 3-2 votes by encouraging "a litigation position when there might not have been one in the first place," he said.

He pointed to the U.S. Court of Appeals for the District of Columbia Circuit’s decision in the Sabal Trail pipeline case, where last year it ordered FERC to do a supplemental analysis to calculate greenhouse gas emissions associated with burning natural gas delivered by the pipeline.

FERC did so and reauthorized the pipeline in March (Energywire, March 16).

"For whatever reason, the majority has been very stubborn in ignoring the admonition of the D.C. Circuit in the Sabal Trail case," Glick said.

The risk is "what happens if the D.C. Circuit and other appellate courts decide to send these cases back to the commission because the commission didn’t do it right in the first time in terms of analyzing GHG emissions?"

His extensive and detailed dissents in the pipeline cases are paid attention to by the courts and compensate for the fact that a lot of objections to such projects are "brought by folks without a lot of resources," and "some do a better job than others of filing briefs. So I think the court can use additional help sometimes," Glick said.

The most recent example of that help was last Friday, when Glick recused himself from a vote on denying a rehearing of a 2017 certificate for the Atlantic Coast pipeline.

"Under the judicial review provision of the Natural Gas Act, you can’t appeal to an appellate court until the commission has denied rehearing.

"If I had voted no — which I would have — it would have been 2-2 and the rehearing would not have been denied, and then the petitioners wouldn’t have been able to go to the court," Glick said.

Whether such tactics will continue to be necessary as the commission is down to four members — having lost Republican Robert Powelson as of last week — is unclear.

"We do have an opportunity here to reset the question a little bit. Now we have four commissioners; we all stuck to our guns a little and ran to our sides. We have a situation where we can’t do that any longer, at least until another slot is filled.