Committed Republican works against the clock to rescue LWCF 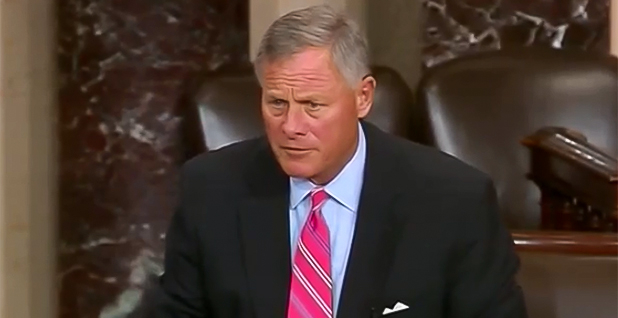 Sen. Richard Burr (R-N.C.) has become one of the chamber's top champions of the Land and Water Conservation Fund. C-SPAN

Permanent reauthorization of the Land and Water Conservation Fund so far has eluded supporters of the popular, bipartisan program. But as LWCF’s current Sept. 30 sunset date approaches, two forces in particular are aligning to make that wish a reality: the calendar and a determined Senate Republican.

"No," North Carolina Sen. Richard Burr said when asked yesterday whether he’d be open to a short-term extension of LWCF — for the second time in three years.

That was shortly before the staunch LWCF advocate took to the Senate floor for the second consecutive day to present another iteration of his proposal to permanently reauthorize the program that has protected lands, waters, forests, wildlife refuges and battlefield sites across the country for more than a half-century.

Burr tried to sweeten the deal he outlined yesterday for any remaining objectors by adding language that would take the $21.5 billion unallocated funds in the LWCF account and devote $11 billion to whittling down the massive national parks maintenance backlog and roughly $10 billion to the government’s general Treasury to pay down the debt.

"I’m giving you a great opportunity," the Republican told his colleagues, adding, "I think I have addressed in the last 24 hours every concern that has been expressed — budget, taxpayer money, parks and maintenance, why should we do it."

He then objected to his own unanimous consent request on the proposal to expedite proceedings in a chamber desperate to reclaim some remaining portion of the traditional August recess.

"I could have waited hours to speak until one of them came to object, but I saw it more worthy of my time to come here and to raise this issue, to present solutions and object to my own unanimous consent request because I respect the right of every individual," Burr said. "But I hope through doing this those colleagues that might have an objection to this would alleviate that objection."

The North Carolinian has been working publicly and privately to advance his cause — and he has the support of many Republicans and Democrats.

"This is an opportunity for us to act," Senate Energy and Natural Resources Chairwoman Lisa Murkowski said on the floor Wednesday when she "reluctantly" objected to Burr’s initial proposal (E&E News PM, Aug. 22).

"It seems that we act best when there is a little pressure from behind or with a timeline, and my commitment to him this morning is to continue this work," said the Alaska Republican.

‘Nothing dies in September’

So, what happens if LWCF expires? The scenario is similar to what occurred in the fall of 2015, when Congress allowed the program’s authority to briefly lapse.

LWCF uses revenue from offshore oil and gas drilling primarily to preserve and maintain the nation’s parks, forests, recreation areas and cultural sites. The authorized funding level is $900 million, but it’s hardly ever been authorized at that level; its annual appropriations in recent years have been typically about half that.

The program provides grants to states and localities, and the federal government uses the money to acquire land and water to promote conservation and recreation.

Offshore drilling funds stop going into LWCF when its authority lapses and instead is diverted into the general Treasury until Congress reinstates it. That affects proposed or new projects — as well as the program’s dedicated funding source — but existing LWCF projects in the pipeline using already appropriated money would continue.

"Stuff that’s been appropriated has been appropriated," said Aaron Weiss, media director at the Center for Western Priorities. The nonprofit group yesterday released a comprehensive report outlining nearly 800 LWCF projects between 2014 and 2017 that protected roughly 500,000 acres across the country (Greenwire, Aug. 23).

"Grant agreements are basically contracts, and the funds obligated or encumbered, so the termination of LWCF authority does not impact the appropriation authority from Congress to spend the money," Joel Lynch, chief of state and local assistance programs at the National Park Service, said in an email.

"As far as I am concerned, nothing stops. Our work always continues so long as Congress keeps appropriating funding, or we continue to have funds to devote to projects," Lynch wrote.

House Natural Resources Chairman Rob Bishop, who has indicated he could be "flexible" on permanently reauthorizing the program, last month called the Sept. 30 sunset date "a phony deadline."

The Utah Republican, who has pushed for improvements to, and better oversight of, LWCF disbursement, said that if the authority expires, "the money will still be there, the programs will still be operating. Nothing dies in September."

"If LWCF expires, Congress is breaking its promise to protect public lands and parks for the next generation," Alex Taurel, conservation program director at the League of Conservation Voters, said on Wednesday.

"This means there won’t be authorization to protect areas around national parks from development or create new community parks."

LCV announced this week that it’s running new digital ads on Facebook targeting four House Republicans who voted for an unsuccessful amendment to the Interior appropriations bill that would have cut $2.4 million from LWCF: Reps. John Culberson of Texas, Darrell Issa of California, Scott Perry of Pennsylvania and Kevin Yoder of Kansas.

The ads profile LWCF projects in the members’ districts and urge them to support permanent reauthorization and full funding for the program.

Taurel added: "We haven’t seen any sign that leadership is bringing LWCF to a vote, despite broad bipartisan support."

Still, some LWCF advocates on Capitol Hill have expressed much more optimism. "I think it will be a permanent reauthorization," Rep. Mike Simpson (R-Idaho) said right before the House left for its recess in July (E&E Daily, July 26).

"That’s what I’m pushing for," the appropriator said.

More than 200 Republicans and Democrats in the House support that view (H.R. 502).

LWCF champions outside Congress, including LCV and Backcountry Hunters & Anglers, have been launching public awareness campaigns about the program’s value and its upcoming expiration date.

"LWCF is also one of the least known or understood programs in our nation," BHA said in a press release. "The vast majority of citizens who benefit every day from the LWCF has no idea that it exists. … Now is the time for Americans to learn about the LWCF, what it is, what it has accomplished, and what is at stake if it [is] taken away from us."

The sportsmen’s group this week released a new interactive report with statistics and featured projects.

"In order to make this story one of crisis averted, however, members of Congress must unite and take action before the LWCF expires at the end of September," said BHA President and CEO Land Tawney. "We the people are raising our voices and sending a strong and uncompromising message to our elected officials: Stand up for the Land and Water Conservation Fund. Stand up for the best of who we are as a nation."

The Hispanic Access Foundation, a nonprofit group that aims to improve the lives of Hispanics in the U.S. and increase civic engagement, has held a series of summer screenings of a short film illustrating the positive impact LWCF and green spaces have had on Latino communities in rural and urban areas, from Rifle, Colo., to Miami.

"Latino communities tend to be disadvantaged and not as well-resourced [as others]," said Jenny Brandt, deputy director of conservation programs at the Hispanic Access Foundation. LWCF "is providing them with access," she said.

The group, which is pushing for permanent reauthorization and full funding of the program, is telling personal stories of people’s special places in the film and during post-movie discussions to raise the profile of LWCF — and influence policymakers.

"Once people develop a personal narrative of connection to a site, it’s easy to make the connection to the fund itself," Brandt said.