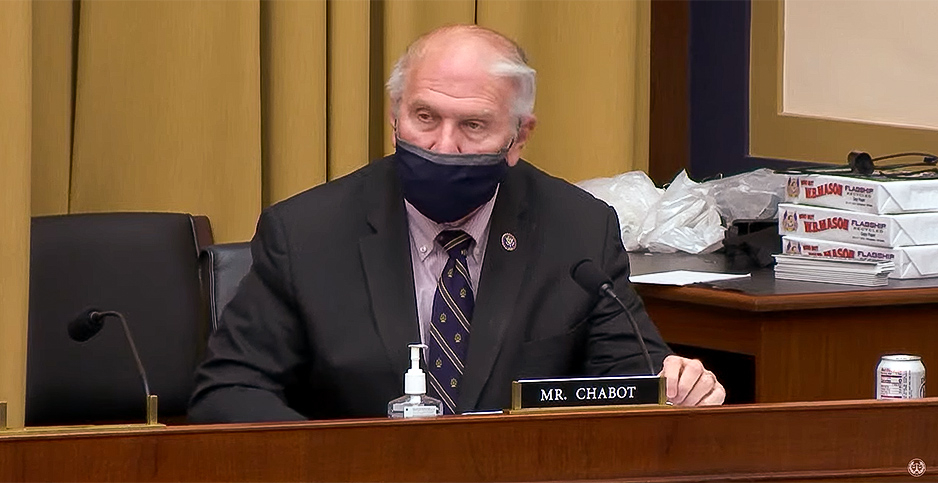 The House Judiciary Committee approved legislation yesterday that would open OPEC — the oil cartel whose members include Saudi Arabia, Venezuela and Iran — to antitrust litigation in the United States.

Rep. Steve Chabot (R-Ohio) has introduced the bill in Congress repeatedly for over two decades. He called OPEC’s attempted market manipulations "unlawful" and said the cartel is hurting American consumers and small businesses by artificially holding up the price of fuel.

"Ultimately, this legislation allows us to fight back against such artificial market manipulation by holding foreign countries and entities accountable for violating U.S. antitrust law," Chabot said.

If the bill passes, only the attorney general could prosecute countries or foreign-backed oil companies that were deemed to be engaged in anti-competitive activities.

Rep. David Cicilline (D-R.I.), a co-sponsor, said the bill was not meant as a political tool. Rather, he called it a way for the attorney general to support a fair energy market and protect American consumers.

"Put another way, this bill allows the Justice Department to speak softly and carry a big stick," Cicilline said.

The OPEC oil embargo of the 1970s crippled U.S. fuel supplies, made prices rise and hurt the economy. But times have changed.

But Jeff Colgan, a professor at Brown University and expert on international energy policy, said the bill is unlikely to substantially boost the U.S. oil industry, which is buffeted by a variety of forces.

"I think the oil industry will look at this bill and shrug their shoulders," Colgan said.

In 2014, Colgan published a study that found that OPEC countries produced more oil than their OPEC-assigned quota 96% of the time between 1982 and 2009.

Colgan noted that the bill is unlikely to pass. Even if it does, there are many outstanding questions about how a prosecution would even function.

Despite statements to the contrary from Cicilline and others, Colgan said it’s very likely that future presidents would wield prosecution as a political tool against rival oil-producing nations.

"Oil is inherently political, and this kind of action would very much be seen by all of the members of OPEC as a political move," Colgan said.

Judiciary Chairman Jerry Nadler (D-N.Y.) is also a co-sponsor, giving the bill additional heft. In the Senate, Republican Chuck Grassley of Iowa took the lead during the least Congress, with Sens. Patrick Leahy (D-Vt.), Mike Lee (R-Utah) and Amy Klobuchar (D-Minn.) as co-sponsors. Grassley is the top Republican on the Senate Judiciary Committee.

Still, that bipartisan backing from high-profile lawmakers could not get the legislation passed in either chamber.

The bill calls into question centuries-old norms around sovereign immunity. The legal concept most commonly applies to foreign diplomats abroad, shielding them from prosecution by a country they’re visiting.

The "NOPEC Act" would specifically exempt nationalized oil-producing companies from immunity, and the United States could draw international ire if the attorney general chooses to wield the law.

Julian Ku, an associate dean of academic affairs and law professor at Hofstra University, said the bill is unusual in opening up foreign nations to antitrust law.

In modern history, exemptions to sovereign immunity have typically been carved out for more extreme issues, like state-sponsored terrorism or human rights violations.

"It’s a little unusual in the antitrust context," Ku said. "But Congress has actually been fiddling with foreign sovereign immunity … for quite a while."

Ku said foreign-owned oil companies are already not privy to sovereign immunity, but the bill would take away their ability to escape prosecution by arguing that they were compelled to fix prices by a foreign government.

"[The reaction] would not be positive," Ku said. "If you’re OPEC, you would say this is just American posturing."

Both Ku and Colgan say the bill could open up American companies to litigation by other countries on their soil. The scholars argue that this threat may deter Congress from pursuing the bill.

In a statement, a spokesperson for the American Petroleum Institute said lawmakers should pursue strategies of boosting domestic production and steer clear of prosecuting OPEC members.

Rep. Tom Tiffany (R-Wis.) said the "NOPEC" bill is necessary because American energy independence is being "jeopardized" by the Biden administration.

"One of the greatest accomplishments of this country in the last decade has been to gain energy independence; that’s ultimately what has made OPEC toothless," Tiffany said.

"We will put the fangs back in OPEC if we continue on the path that the Biden administration has taken here to shut down the infrastructure like [the Keystone XL pipeline] to transport oil."

Rep. Louie Gohmert (R) said — despite evidence to the contrary — that renewable energy sources were to blame.

Rep. Sheila Jackson Lee (D) shot back, saying the crisis pointed to the need to weatherize the grid and move away from oil into a modernized energy economy.

At the peak of the crisis, nearly twice as much energy from coal, gas and nuclear energy was offline as energy from renewables like wind (Energywire, Feb. 17).

Jackson Lee said, "This is a good bill. But let’s not stick our hands and our head in the inevitable sand or well. Let’s realize that we can create jobs by moving America into the 21st century."