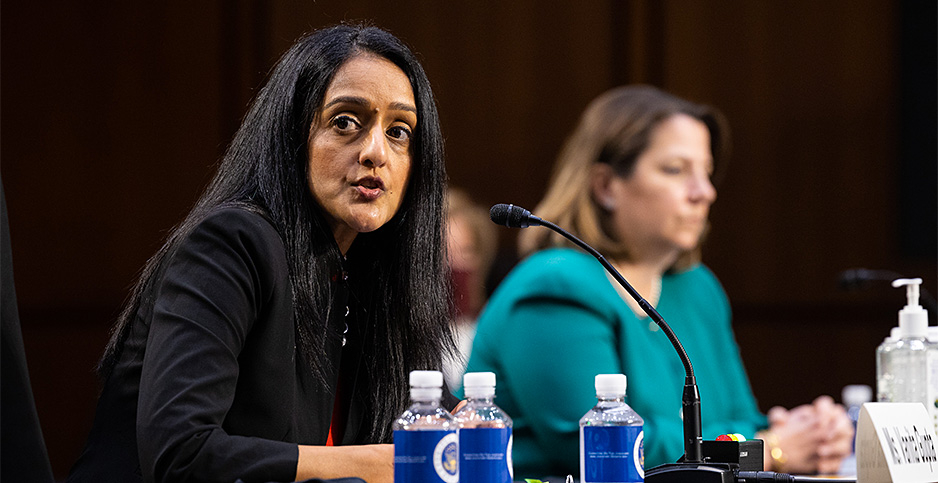 The Senate Judiciary Committee today was evenly split on whether to approve President Biden’s pick to oversee the Justice Department’s civil offices.

Lawmakers on the committee voted 11-11 on the nomination of Vanita Gupta to be associate attorney general, which oversees a number of offices, including DOJ’s Environment and Natural Resources Division.

"Swiftly confirming these nominees is critical," Chairman Dick Durbin (D-Ill.) said during a hearing this morning.

After hearing two hours of debate on Gupta — who has drawn GOP scrutiny for her critiques of former President Trump’s judicial nominees, her stance on police reform and other issues — Durbin pressed ahead with a vote.

Republicans on the panel last week held over Gupta’s nomination for one week, which is allowed under committee procedures. They submitted a letter to Durbin this week asking for a second hearing on Gupta (E&E Daily, March 24).

Durbin called for a vote this morning in the midst of a nearly 15-minute statement from Sen. Tom Cotton (R-Ark.) on why Gupta shouldn’t be confirmed to the position.

Cotton objected to Durbin’s interruption of his remarks. "I guess he found them too persuasive," he said.

Durbin admonished Cotton and other committee Republicans for interrupting the vote.

Throughout the session, Durbin responded to Republicans’ criticisms of Gupta for supporting "defunding the police."

Gupta said during her hearing that she does not support pulling funding for law enforcement, and Democrats noted broad support from law enforcement groups for Gupta’s nomination.

The Senate has procedures to advance a nominee to a floor vote in the case of a committee tie. That process was invoked for Biden’s nomination of former California Attorney General Xavier Becerra (D) to lead the Department of Health and Human Services.

The committee approved by voice vote the nomination of Lisa Monaco to serve as deputy attorney general.