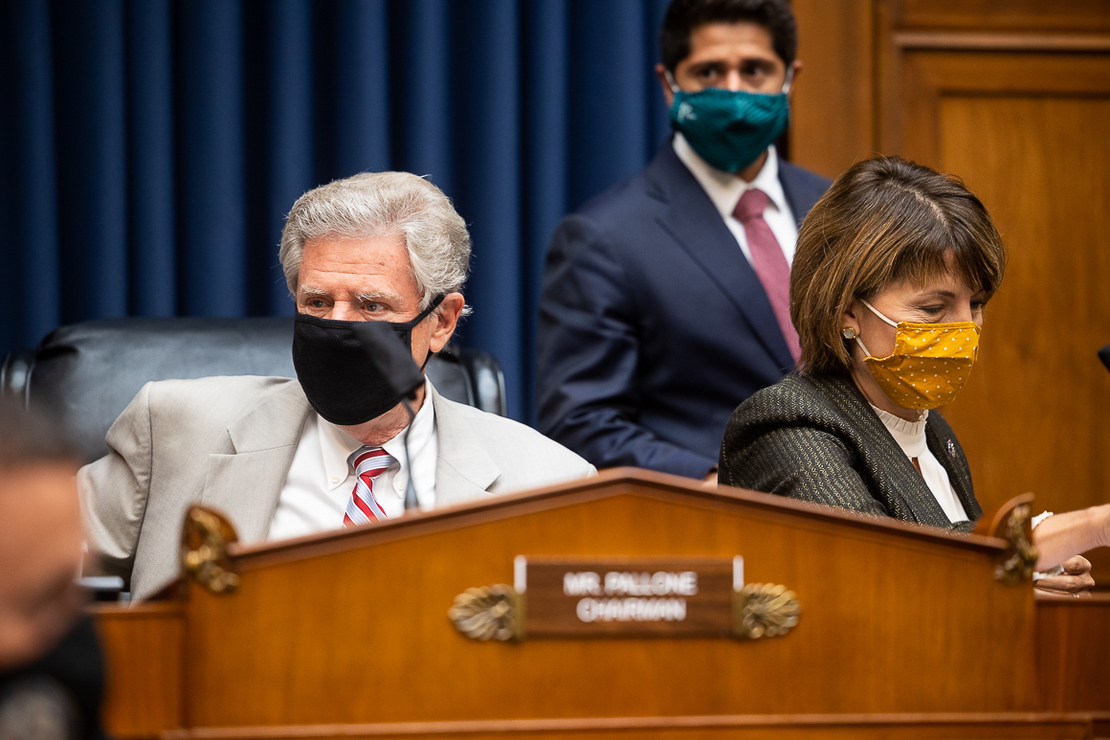 The Energy and Commerce Committee advanced parts of its sprawling budget reconciliation bill in a marathon markup yesterday but punted until later today a fight over Democrats’ marquee climate policy.

The panel recessed around 3 a.m. this morning after 15 hours of debate, having passed six of the 16 subtitles that make up its portion of the $3.5 trillion reconciliation package. Lawmakers will reconvene at 10 a.m. to finish the energy subtitle and the $150 billion Clean Electricity Performance Program (CEPP), the centerpiece of E&C’s massive suite of climate and environmental policies.

They got through a handful of amendments to the energy section before breaking for the night, but today’s action could bleed into the evening again, as committees push to finish up work on their reconciliation bills ahead of the Sept. 15 deadline set by Democratic leadership.

E&C did, however, vote to advance the air pollution, hazardous materials and water subtitles of its $456 billion section, largely along partisan lines. That includes a fee on methane emissions, $30 billion for lead pipe replacement, as well as billions of dollars for a green bank, Superfund cleanup and environmental justice grants.

“Through this legislation, we are setting up clean electricity to be the backbone of the Biden economy, an economic plan that truly works for all Americans,” Energy Subcommittee Chair Bobby Rush (D-Ill.) said yesterday.

Democrats used the opening day of the markup to hone their climate policy sales pitch, pointing to a raft of Western wildfires in an intense drought and the hurricane and flooding that struck the Gulf and East coasts this month. They rejected more than a dozen GOP amendments throughout the day, including proposals to toss out the CEPP and methane fee.

“We cannot deny that nearly every single one of our states, Republican or Democrat, has been affected by intensified extreme weather events due to climate change,” said Rep. Doris Matsui (D-Calif.).

But the debate also foreshadowed the intraparty disputes that are likely to bubble up as Democrats attempt to quickly cobble together and pass the massive spending bill in the coming weeks.

With narrow margins in the House, Democrats would need nearly every member of their caucus to support the bill on the floor. They’re already seeing a flurry of lobbying on the CEPP, which would aim to hit 80 percent clean power by 2030, affecting virtually every corner of the energy industry.

Rep. Kurt Schrader (D-Ore.), a moderate who voted against the last COVID-19 relief reconciliation package, voted against many of the proposals the committee considered yesterday — calling the bill “fiscally irresponsible” — and voiced concern about the design of the CEPP.

The performance program would give grants to electricity suppliers that increase clean electricity at least 4 percent over the previous year and hand out fees to those who do not. It’s essentially a clean electricity standard designed to fit the Byrd rule that governs filibuster-proof reconciliations bills in the Senate.

Schrader said designing a policy solely to fit a parliamentary process is “terribly wrong.” “Instead of a bipartisan consensus-based approach to policymaking, we’ve been given a take-it-or-leave-it proposal,” Schrader said. “The text inspires more questions than answers.”

Republicans also pointed out that the package seems to have little chance of passing the 50-50 Senate, with Energy and Natural Resources Chair Joe Manchin (D-W.Va.) publicly opposed to both the CEPP and the $3.5 trillion top line (E&E Daily, Sept. 13).

“How about having an adult conversation instead of this charade?” said Rep. David McKinley (R-W.Va.).

The GOP spent much of yesterday trying to stall out the bill, which they blasted on harsh partisan terms.

“This is not what the American people want,” said ranking member Cathy McMorris Rodgers (R-Wash.). “This is Speaker Pelosi’s grand socialist agenda to destroy freedom and embolden our enemies on the backs of the American people.”

Republicans are expected to offer nearly a dozen more amendments on the energy section of the legislation when the committee reconvenes this morning, but the CEPP is likely to pass along partisan lines at some point today.

Before the panel broke for the night, lawmakers rejected on a 25-30 vote an amendment from Rep. Michael Burgess (R-Texas) that would have eliminated the CEPP from the bill. Schrader voted for the proposal against the rest of his party.

Republicans argued the program would effectively eliminate fossil fuels and increase reliance on critical minerals imported from abroad and used in batteries and renewables.

“It should be intuitively obvious to the casual observer that the Clean Energy Performance Program is a threat to the reliability of our electric grid and to the wallets of ratepayers and of course jeopardizes energy jobs across America,” Burgess said.

By design, the CEPP would indeed rule out virtually all natural gas and coal from being counted as clean energy (E&E Daily, Sept. 13). But Democrats said the payment structure would ultimately reduce electricity rates and allow utilities flexibility to deploy different types of clean energy.

“I know we’re going to hear people saying we’re having mandates for only certain types of energy. That’s not what this is about,” said Rep. Diana DeGette (D-Colo.), a longtime backer of clean electricity standard legislation. “What it’s about is making sure that we can generate electricity from zero carbon sources, irrespective of what those sources are.”

Still, Republicans are already seeing some industry support for their arguments, despite Democratic efforts over the last few years to rally the business community around climate policy.

America’s Power, which represents the coal industry sent a letter to Energy and Commerce leadership yesterday saying the CEPP would “eliminate coal-fired electricity by 2030, if not sooner.”

“The CEPP would eliminate the use of fossil fuels to generate electricity in the U.S., while China’s coal fleet continues to grow,” wrote President Michelle Bloodworth.

The National Rural Electric Cooperative Association also expressed its opposition yesterday, telling lawmakers that the clean energy targets are too aggressive and the 10-year timeframe unrealistic.

“The electric co-ops we represent have existing contractual obligations and resource development plans that extend for several years, if not decades,” NRECA CEO Jim Matheson wrote to E&C lawmakers. “Many of those plans anticipate continued deployment of a diverse set of affordable, clean electricity sources, but not all those plans align with the CEPP.”

Investor-owned utilities, however, are signaling they may be willing to play ball on the performance program. Many have their own decarbonization targets and have spent significant time lobbying on various clean electricity standard proposals in recent years.

“We are supportive of the concept of the proposed Clean Electricity Performance Program, and the details will matter to ensure that our industry can continue to reduce carbon emissions and to make investments in the clean energy future that our customers want and deserve,” Edison Electric Institute President Tom Kuhn said in a statement.

Outside of the CEPP, much of the partisan back-and-forth yesterday centered on the methane fee, which Republicans repeatedly referred to as a “natural gas tax.”

The fee would be assessed at individual oil and gas facilities — including storage, production and processing — that report methane emissions under the Greenhouse Gas Reporting Program calculated with a complicated formula. It passed as part of the air pollution section on a 31-26 vote.

Rodgers floated an amendment to nix the provision entirely, with Republicans arguing the cost would be passed to consumers, violating President Biden’s pledge not to enact new taxes on families making less than $400,000 a year.

“I don’t think you can credibly say that this will have no effect on anyone who earns less than $400,000 a year unless you’re going to establish an elaborate rebate system for people in that price range,” Burgess said.

When that proposal failed on a 26-32 vote, Republicans introduced amendments to exempt various industries from the methane fee, including agriculture and public health facilities. All eventually failed along party lines.

“I really am taken aback by this all-out, enthusiastic support of fossil fuels,” said Rep. Anna Eshoo (D-Calif.), noting that major automakers have already pledged to stop making gas-powered cars over the next decade.

“Your argument is about yesterday. It’s not about the future,” Eshoo said. “Any society that isn’t moving away from fossil fuels does not have a bright future.”

Meanwhile, Rep. Lizzie Fletcher (D-Texas), who represents natural gas interests in Houston, raised her own concerns about the methane fee provision, though she ultimately voted for it.

Sen. Sheldon Whitehouse (D-R.I.) introduced a bill, S. 645, earlier this year to slap a fee on methane emissions on a basin by basin basis, which was seen as a potential model for a methane fee in reconciliation, but Fletcher said she sees “many problems with that approach.”

“I appreciate this committee’s effort to tailor its approach to actual, measurable, individualized emissions in an existing mechanism where attainment is possible, something that the Senate bill does not do,” Fletcher said during the markup.

The proposal has long been popular among climate advocates, but Armstrong said it would allow EPA officials to “fund their pet projects with taxpayer money.”

“This is built on the successes of similar financing entities across the United States,” Dingell said.

The water and hazardous waste sections of the bill proved less controversial, though Republicans still opposed them.

The water subtitle — which passed 31-25 — would dole out $30 billion for lead service line replacements, piling on to the $15 billion for removing lead pipes that service drinking water included in the bipartisan infrastructure bill.

The panel rejected on a 24-31 vote an amendment from Rep. John Curtis (R-Utah) that would have prevented people making more than $1 million a year from getting federal money for service line upgrades.

While Schrader noted that the bipartisan infrastructure bill that has passed the Senate already makes historic investments in water infrastructure, Dingell said the funding in the E&C package would be “critical” to stop lead exposure.

“I can’t be silent tonight, and I’m as tired as anybody else is,” Dingell said. “But in the midst of this ongoing global pandemic social and economic turmoil, and everything that we’re experiencing, we can’t forget that this nation is facing a real drinking water crisis nationwide.”

The hazardous materials section, which passed 31-26, would offer $10 billion for Superfund cleanup and $5 billion for environmental justice block grants.