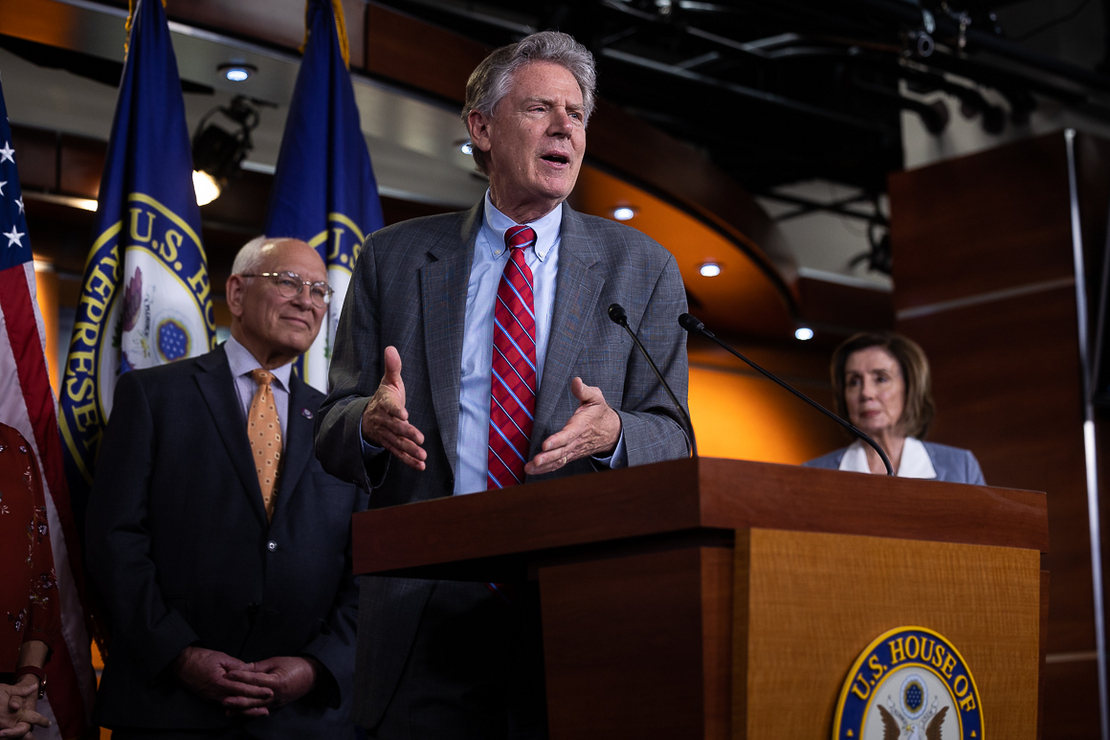 The House Energy and Commerce Committee will vote Monday on a clean electricity performance program, investments in electric vehicles and improvements in electric transmission for its portion of the $3.5 trillion reconciliation package.

“The climate crisis is here, and the cost of inaction is already staggering,” Chair Frank Pallone (D-N.J.) said in a statement yesterday. “The investments we’re making in the Build Back Better Act are absolutely essential to addressing this growing threat and keeping our economy competitive as the rest of the world races to dominate the clean energy job market.”

E&C’s $456 billion slice will be the most consequential for climate and greenhouse gas emissions, alongside contributions from the Ways and Means Committee, which is looking to expand a variety of clean energy tax breaks as part of its own piece of the reconciliation bill.

The Energy panel is proposing a $150 billion clean electricity performance program for the power sector, the centerpiece of Democrats’ suite of climate policies, alongside additional money for EVs, the grid and lead pipe removal (E&E News PM, Sept. 9). The committee circulated a fact sheet yesterday before releasing the full text for the energy and drinking water sections of its bill last night, as well as a detailed policy memo.

But like other reconciliation markups this week, Monday could be a mine field, with outside groups ramping up pressure and Republicans opposing the legislation at every step.

The clean electricity performance program (CEPP), which Democrats are hoping would help achieve 80% clean power by 2030, is likely to get the most attention. The proposed Department of Energy program would hand out grants to electricity suppliers that increase clean electricity at least 4 percent over the previous year.

Suppliers that hit the target would get $150 for each megawatt-hour above 1.5 percent of the previous year’s clean energy generation, according to E&C’s fact sheet. Those that do not would be slapped with a fee of $40 per MWh based on their clean energy shortfall.

It’s a fleshed-out version of a policy that advocates and lawmakers — particularly Sen. Tina Smith (D-Minn.) — have been talking about for months, a clean electricity standard designed to fit into the narrow rules that govern budget reconciliation.

But Democrats will also have to deal with Energy and Natural Resources Chair Joe Manchin (D-W.Va.), a coal state moderate who has said he is uncomfortable with eliminating fossil fuels.

The United Mine Workers of America, which is close to Manchin, is considering opposing the entire package amid concerns about the CEPP and a lack of money to transition coal miners to new work. UMWA President Cecil Roberts wrote a letter to Manchin last month outlining the group’s concerns.

“West Virginia depends on coal for 95% of its electric power. These carbon reductions would eliminate virtually all of West Virginia’s coal generation fleet of eight baseload power plants well before the end of this decade,” Roberts wrote. “All related coal mining and utility jobs would be lost, with severe impacts on families, communities, and the local and state tax revenues associated with mining, electric generation, and electric power exports.”

“We’re talking about a whole bunch of jobs,” Smith said. “Where’s the replacement?”

Energy and utility interests are also closely watching how the policy develops. Investor-owned utilities, in particular, have increasingly lobbied on clean electricity standard legislation in recent months, and many support some vision for reducing emissions in the power sector.

And despite relatively unified support in the environmental community against it, natural gas could continue to be a sticking point moving forward. The CEPP would count generation with a carbon intensity less than 0.10 metric ton of carbon dioxide equivalent per MWh as clean energy, meaning natural gas would get left out.

That pleased progressive environmental groups, but it’s likely to raise eyebrows among industry groups and moderate Democrats. Manchin, in particular, has repeatedly warned against “elimination” of fossil fuels.

“We are analyzing what could be a narrow performance standard for clean energy,” Scott Segal, a partner at Bracewell LLC, which represents energy clients, said in an email. “Frankly, clean energy should include all low- and zero-emitting energy including wind, solar, geothermal, hydrogen, hydropower, nuclear, and carbon capture with storage on natural gas combined cycles and coal generation, and energy efficiency measures that reduce demand.”

In a nod to Manchin’s concerns, Sen. Smith said last night that the CEPP as she envisions it is “not about eliminating sources of electricity.”

“I will work with my Senate colleagues and the Energy and Natural Resources Committee Chairman to ensure the clean electricity plan helps deploy all technologies needed for a clean, affordable, and reliable grid — including renewables, fossil fuel with carbon capture and storage, and nuclear,” Smith said in a statement.

Environmental groups, meanwhile, are going on the offensive. Evergreen Action and the Natural Resources Defense Council commissioned a report, released yesterday, that found the CEPP could generate 7.7 million jobs and a $907 billion economic benefit via the construction of 600 gigawatts in new clean energy. Hitting 80% clean electricity by 2030 would also greatly improve air quality, according to the report from Analysis Group.

“The reality is that clean energy is the future,” said Leah Stokes, a professor at the University of California, Santa Barbara, who helped develop the CEPP. “The sooner we invest in clean energy jobs, the sooner the economy will grow and the more people will be employed in the economy in the jobs of the future.”

For workers, like those from UMWA, concerned about losing their job, “I’m hopeful that we’re going to see a really big package for energy workers as part of the reconciliation bill,” Stokes said.

The League of Conservation Voters and Climate Power are also putting another $6 million into their efforts to press vulnerable Democratic lawmakers to support President Biden’s climate plans, including the reconciliation package.

The groups said yesterday they’re launching new television and digital ads in Washington and in the states and districts of Democrats like Sen. Mark Kelly (Ariz.), Rep. Chris Pappas (N.H.) and Rep. Cindy Axne (Iowa), pushing them to vote for the "Build Back Better Act."

“Communities in every corner of the country are suffering from the devastating impacts of the climate crisis and Congress has the opportunity right now with the Build Back Better Act to course correct and put us on the path to a cleaner, safer, healthier future,” Pete Maysmith, LCV’s senior vice president of campaigns, said in a statement.

“It is imperative that the Build Back Better Act passes in the next few weeks and puts the nation firmly on track to cut carbon emissions 50 percent by 2030 — the goal that President Biden set and science and justice require.”

The effort comes on top of massive spending the groups have done in recent months advocating for Biden’s climate agenda, including more than $14 million in August alone.

Energy and Commerce will be busy Monday with a large cross-section of policy that runs from health care to energy.

Congressional leaders are looking to compile the full $3.5 trillion reconciliation bill by Wednesday, a quick deadline for what will be a massive hodgepodge of spending policies.

Other energy and environmental policies in the Energy and Commerce portion of the bill include: