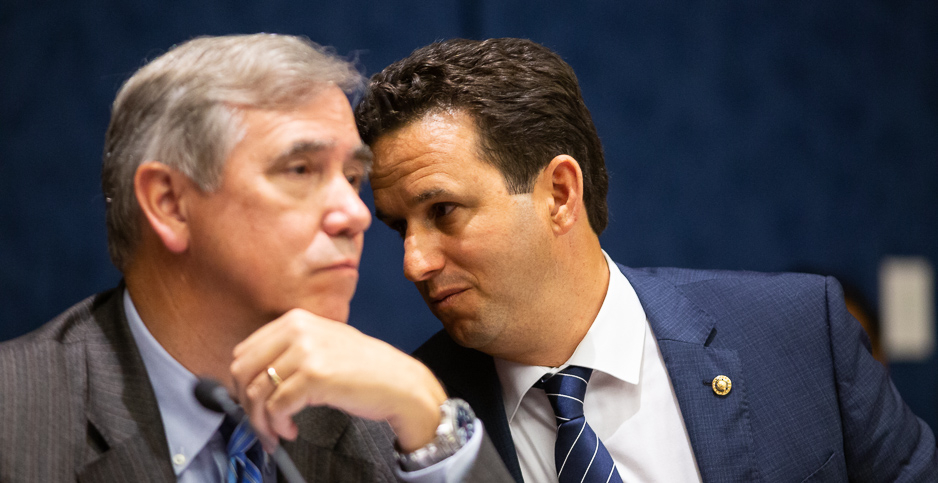 The Senate Democratic takeover and several retirements will make the Appropriations Committee fertile ground over the next two years for some of the sharpest debates over President Biden’s energy and environmental agenda.

Nine of 12 subcommittee chairs (cardinals in Washington-speak) will be new party leaders on their respective panels. In other words, they were not ranking members last year. They include Sen. Jeff Merkley (D-Ore.), who will lead the Interior and Environment Appropriations Subcommittee.

As a divided Congress has struggled to pass major legislation in recent years, spending bills have taken on increased importance. They have become the venue for high-profile fights over climate change and the boundaries of energy exploration.

Merkley, a progressive who has made climate change a priority since joining the Senate in 2009, could push the Biden White House even further on the environment.

"We’ve only got one planet, so I am encouraging the administration and certainly the Congress to use every tool we have available," Merkley told E&E News recently in explaining his support for declaring the emergency.

The Oregon Democrat said he sees a huge opening to make more solar panels and wind turbines domestically as part of that effort.

In the latest spending bill, Merkley says, he helped to secure $2.5 billion for fire suppression efforts as well as $40 million for the Collaborative Forest Landscape Restoration Program.

Merkley has been active in securing federal dollars for improving the fish habitat along his state’s Klamath River, in part by removing dams.

He also said he "takes seriously" the need for increased resources for Native American tribes inside and outside his state, while also acknowledging their sovereign rights.

Merkley has in the past sponsored legislation to ban all oil and gas drilling on federal lands. His view is far more restrictive than the one currently being pursued by the Biden administration, which is now opting for a "pause" while it reconsiders the federal leasing program.

With Udall’s retirement, Merkley will also become a voice for legislation to crack down on single-use plastics and increase recycling.

A permanent ban on drilling on public lands would alienate even some Democrats who are currently inclined to support Biden’s pause. At this point, these lawmakers can argue that the temporary leasing freeze is a step toward facilitating a transition away from fossil fuels but doesn’t completely disrupt the industry and those who rely on it.

A total ban would, for example, irk Democratic Sen. Martin Heinrich, who is now chairman of the Military Construction and Veterans Affairs panel.

Heinrich represents New Mexico, where oil development supports jobs and its revenue stream funds public schools. He recently told E&E News that although he was fine with the current moratorium as a bridge to a green energy transition, he wouldn’t support a permanent prohibition at this time (E&E Daily, Feb. 8).

Merkley’s staunch anti-drilling stance could also run up against Sens. Jon Tester (D-Mont.), the new chairman of the Defense Subcommittee, and Joe Manchin (D-W.Va.), who doesn’t have a subcommittee leadership assignment this Congress but is chairman of the Senate Energy and Natural Resources Committee.

Tester and Manchin were the only Democrats to vote two weeks ago for a Republican amendment to a nonbinding budget resolution in support of the Keystone XL pipeline (E&E Daily, Feb. 12).

This is an issue that will be particularly potent for Sen. John Hoeven (R-N.D.), the ranking member of the Agriculture, Rural Development, and Food and Drug Administration Appropriations Subcommittee, whose state has seen an economic boom with increases in hydraulic fracturing.

Republican appropriators could find a way to take advantage of Democrats’ lack of unity on Biden’s oil and gas agenda.

Sen. Lisa Murkowski (R-Alaska) is Merkley’s counterpart on the Interior and Environment Subcommittee who has made clear she opposes "pulling the rug out from under Alaska’s economy" in freezing new leases.

Meanwhile, Kennedy, whose state of Louisiana also relies on revenue streams from drilling in the Gulf of Mexico, has promised to make fighting Biden’s environmental agenda fundamental to his leadership style.

"In only a few weeks, President Biden has managed to make a mockery out of the thousands of hardworking Louisianans in the energy industry by enforcing an energy ban that will cost many thousands of Louisianan jobs by next year," Kennedy said in a statement last week.

Sen. Dianne Feinstein (D-Calif.), who will reclaim the Energy and Water Development gavel, is likely to reemphasize the Department of Energy’s role in clean energy research, while also looking to rein in spending on the nuclear weapons side of the equation.

Kennedy, however, has already signaled that he wants to use the perch to needle Biden energy policies. "I intend to use my position on this subcommittee to stop President Biden’s war on energy jobs and keep America energy independent," Kennedy said in his statement.

The subcommittee has been known for its collegial, collaborative effort. Alexander was a longtime champion of energy research and development, especially as it related to nuclear energy.

Kennedy has more conservative stripes than Alexander on spending. The Louisiana Republican, up for reelection in 2022, has been skeptical in the past about nuclear energy research and demonstration spending.

"I made a New Year’s resolution, and my New Year’s resolution is that I’m not going to sit through any more hearings where people are asking me for money unless they are prepared to explain to me why," Kennedy said during a January 2019 Energy and Water Development hearing on advanced reactor technology, where he roasted witnesses on their billion-dollar request for demonstration projects.

Despite the skepticism, Kennedy has shown some bipartisanship. He, along with Sens. Tom Carper (D-Del.) and John Barrasso (R-Wyo.), negotiated a phase-down deal for climate-warming hydrofluorocarbons, emitted from air conditioners and other cooling technology.

Kennedy has also used his position on the subcommittee to advocate for liquefied natural gas exports to help clean up international emissions.

Kennedy’s post may help influence spending on Army Corps of Engineers projects, especially as they relate to the Mississippi River and Gulf of Mexico coastline.

That focus is in part because of Louisiana’s unique coastline issues caused by a combination of rising sea levels and sinking land.

"Our problem in Louisiana is that we are drowning, literally," Kennedy said during a March 11, 2020, hearing. Citing his property about 250 miles from the coast, Kennedy said, "If we continue down the path we are on, where I live today will be Gulf-front property."

Sen. Brian Schatz (D-Hawaii), a progressive on environmental issues and an electrical vehicle booster, will take the helm of the Transportation and Housing and Urban Development Appropriations Subcommittee.

Other subcommittee leaders are: