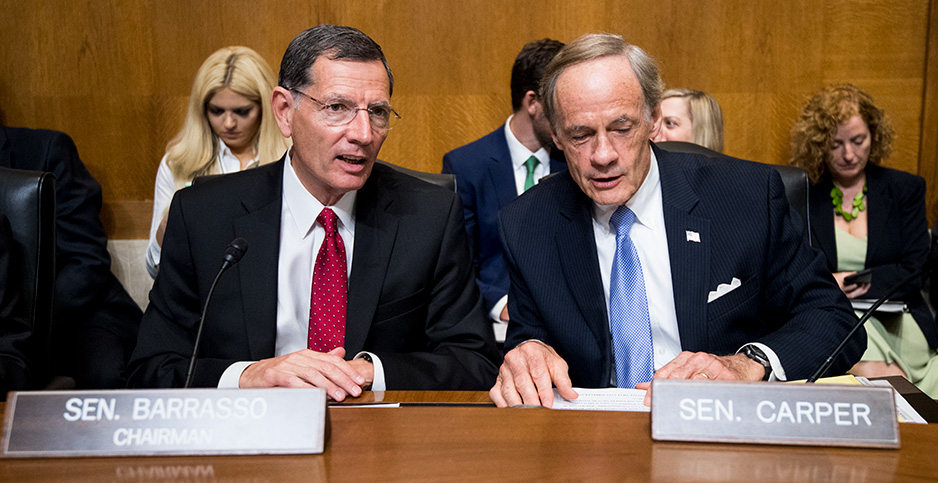 The legislation is aimed at reauthorizing the Fixing America’s Surface Transportation (FAST) Act, which is set to expire in October 2020.

Democratic and Republican aides on the EPW Committee are touting it as the "most substantial highway bill in history."

It would provide $287 billion in highway spending during the next five years — a more than 27% increase over the FAST Act, according to a summary provided to E&E News by committee aides.

With regard to climate change, the measure contains provisions aimed at reducing carbon emissions from transportation and improving the resiliency of roads and bridges to extreme weather events.

In a nod to a longtime conservative priority, it also includes provisions to streamline the permitting process for large infrastructure projects.

EPW Committee leaders plan to mark up the bill tomorrow before heading out for the August recess.

Ranking member Tom Carper (D-Del.) told E&E News that the climate title of the legislation seeks to greatly expand the country’s network of electric-vehicle-charging stations along the interstate highway system.

In terms of resilience, the Delaware Democrat noted that recent record-high temperatures have placed a strain on asphalt and other building materials.

"The last four summers have been the four hottest years on record. This one may break the record," he said, adding, "there are places around the country where the asphalt is so hot, actually, it’s bubbling up on roads."

Shannon Heyck-Williams, director of climate and energy policy at the National Wildlife Federation, said she was pleased to learn the bill would address EV-charging infrastructure.

"Certainly we think electrification has got to be the future direction for the sector," Heyck-Williams said. "And obviously infrastructure is a huge current hurdle to making that happen."

Other priorities for the group include improving public transit, expanding biking and walking infrastructure, and providing for more wildlife crossings to prevent collisions between animals and vehicles, she said.

It remains unclear how lawmakers will find the funds to pay for the highway bill.

The funding question also loomed large over infrastructure talks between the White House and Congress earlier this year.

Those talks ultimately collapsed after President Trump stormed out of a meeting with congressional Democrats, spelling the death of a large infrastructure package and shifting the focus to the highway bill (E&E Daily, May 23).

When Congress last reauthorized the FAST Act, lawmakers tapped general funds as well as the Strategic Petroleum Reserve, an emergency store of petroleum maintained by the Department of Energy.

Carper ruled out raiding the reserve again. "It was an awful idea then, and if somebody suggested it now, I would do all I can to make sure we don’t do that," he said.

Another funding option on the table is increasing the federal gas tax of 18.4 cents per gallon, which hasn’t been raised since 1993.

In the absence of federal leadership, a number of states have recently moved to increase their own gas taxes, including red states such as Indiana, Nebraska and South Carolina.

But a gas tax hike is a heavy political lift in the Senate, where Majority Leader Mitch McConnell (R-Ky.) is a staunch opponent of raising taxes.

The Heritage Foundation, a conservative think tank, also released a report last week claiming that a gas tax hike of 25 cents per gallon in 2020 would lead to the loss of 62,150 jobs and $469 billion in gross domestic product.

David Ditch, a budget and transportation associate at the Heritage Foundation and an author of the report, said the group favors allowing states to make their own choices about the gas tax, rather than imposing a top-down federal mandate.

"The overall trend demonstrates that if we reduce the federal government’s role, states are not helpless," Ditch said. "States are comfortable with increasing gas taxes when they see the need, and they’re capable of doing it."

On the other side of the U.S. Capitol, the House Transportation and Infrastructure Committee is moving at a much slower pace to advance its own highway bill.

T&I Chairman Peter DeFazio (D-Ore.) told E&E News the panel will not have a bill ready before the August recess.

"We’re holding a series of hearings, moving forward deliberately," he said. "The bill is due on Oct. 1, 2020. I hope [to] have a bill ready by early next year."

DeFazio also praised his Senate counterparts for focusing on EV-charging infrastructure — a longtime priority for the Oregon lawmaker.

"Press I’ve seen leads me to believe we could have some common cause," he said. "I want to do massive electrification of the National Highway System. They’re at least doing something on electrification."