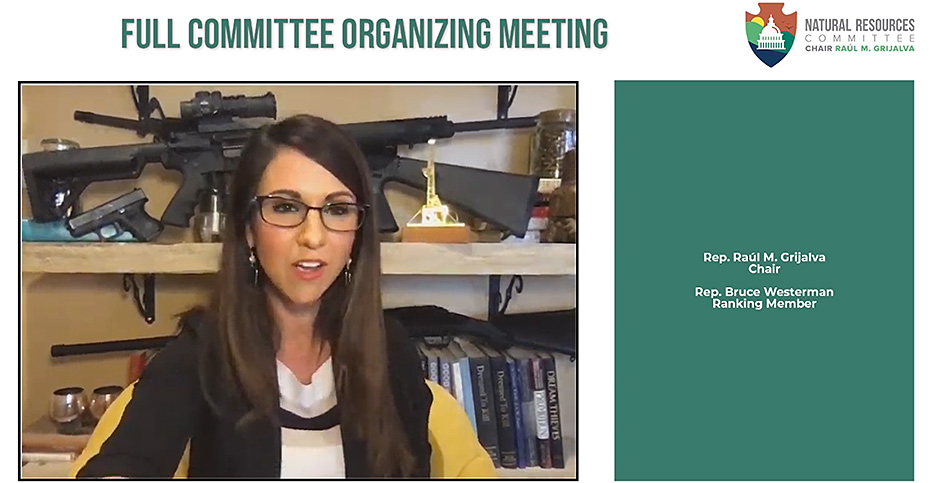 A perfunctory House Natural Resources Committee organizational meeting yesterday at times turned into a partisan free-for-all, including on the issue of guns.

Convening virtually to adopt a rules package for the 117th Congress, members of the panel squabbled over issues including jurisdictional turf, the pros and cons of remote proceedings, the majority’s power to issue subpoenas, and the individual rights to carry guns inside the hearing room.

There was a brief digression where a Republican lawmaker — Rep. Daniel Webster of Florida — asked if Democrats would insist on using gender-neutral titles to address colleagues over the course of committee business.

Del. Gregorio Kilili Camacho Sablan, an independent from the Northern Mariana Islands, told members he was very much enjoying working from home rather than having to commute back to Washington during a pandemic — at which point the committee’s new ranking member, Rep. Bruce Westerman (R-Ark.), mistakenly quipped that maybe the committee could next conduct legislative business in Guam.

Throughout the meeting, members openly mocked one another, some even in real time on Twitter.

"I always thought my dirty dishes piled up and accumulating bacteria were the most dangerous thing in a Zoom background," tweeted Rep. Katie Porter (D-Calif.) regarding Rep. Lauren Boebert (R-Colo.), who patched into the remote proceedings against a backdrop of a bookshelf stocked with firearms.

And Boebert, less than two months into her tenure on Capitol Hill, made clear she was prepared to eschew niceties with her new colleagues and confirm predictions that she will be a vocal, even disruptive, force on the committee.

Here are some of the takeaways from the organizational meeting that could forecast a turbulent legislative session.

Boebert in the spotlight

Members were roughly 30 minutes into what would become a 2 ½-hour markup when Boebert demanded a vote on striking Natural Resources Chairman Raúl Grijalva’s comments regarding the committee GOP’s position on conducting business remotely versus in person.

Westerman argued for the adoption of an amendment to the panel’s rules package that would allow members unfettered access to the committee hearing and conference rooms for official business, as well as access to audio and visual equipment. He was himself appearing from the committee hearing room, wearing a face mask and using his own laptop to participate in the virtual meeting.

Grijalva (D-Ariz.), reminding colleagues he contracted COVID-19 last summer after being pressured to convene an oversight hearing in person, accused Republicans of "attempt[ing] to undercut public health advice and pretend the pandemic is a hoax."

He declared the panel "will not use its resources so that members can pretend they are somehow tougher, more fearless than people who take the pandemic seriously."

At that point, Boebert called for Grijalva to retract his statement, which she said expressed "intent and motive that [Republicans] believe this virus is a hoax and that we are tough."

The demand necessitated a brief recess while committee staff scrambled off-camera to determine whether Boebert needed to put her request in writing and offer it up for a vote.

"I’m ready to move on," Grijalva said upon returning.

Grijalva ultimately withdrew his statement in favor of a more measured explanation for his opposition to Westerman’s proposal, and Boebert retreated as well.

The committee went on to reject Westerman’s original amendment.

But it wasn’t long before Boebert was back at the center of the action to oppose another provision of the rules package — one that would prohibit anyone from carrying a firearm into the committee hearing room.

This is not a prohibition that can be found uniformly in other committee rules documents, leading to a conclusion that it was placed in the Natural Resources resolution specifically with Boebert in mind. She has been open in her plans to seek expanded opportunities to carry her Glock around Washington and the Capitol complex.

If Democrats took away her Second Amendment right to bear arms for self-protection, Boebert said yesterday, she would demand "a personal security detail that the chairman pays for himself, for every time I step into this committee room."

Rep. Jared Huffman (D-Calif.) remarked, dryly, that "if somebody wants to have a shrine to their gun fetish as a Zoom background in their private life, they can do that, but this is our hearing room."

Rep. Don Young (R-Alaska) then volunteered that he learned in Korea "how to kill somebody with my hands," so that by Huffman’s logic every lawmaker should come into the committee room "with their hands tied together so we can’t attack one another."

At the end of the hearing — after the committee had voted against changing the rules package to enable Boebert and others to carry weapons, 19-25 — it was noted that yesterday was Huffman’s birthday.

"Son of a gun," Grijalva exclaimed upon hearing the news, seemingly without irony.

Boebert, unable to resist, wished Huffman a "very happy birthday," observing he’d already been given a "lovely tin foil birthday hat as, I guess, our Second Amendment rights are a conspiracy."

A more substantive debate yesterday was prompted by an amendment offered by Rep. Yvette Herrell (R-N.M.) that the Natural Resources Committee rules package reflect the panel’s obligation to involve itself in future debates on budget reconciliations.

Natural Resources was among the committees that did not participate in the reconciliation process that will facilitate the massive COVID-19 relief bill to hit the floor next week, with Democratic leaders arguing the panel’s portion of the bill was too small to be consequential.

But this discussion, too, became derailed, as Rep. Darren Soto (D-Fla.), attempting to back up his party’s leadership, informed his colleagues that the Energy and Commerce Committee had already met to advocate on behalf of sound environmental policies.

"The Energy and Commerce Committee has prime jurisdiction over energy, and that section was debated for hours," said Soto, adding that all members should "aspire" to serving on that highly coveted committee if they want to have a voice on these matters.

Republicans did not take kindly to that characterization or suggestion, with Westerman questioning "the purpose of even having this committee" if the plan is to defer to other panels on key issues over which Natural Resources does have purview.

Other Democrats opted out of participating in this debate, and the Republican amendment was rejected along party lines, 19-25.

Grijalva did, however, speak up decisively in support of retaining language in the rules package to give himself broad subpoena power over relevant federal agencies, a new privilege for the Natural Resources chairman he secured last year after countless standoffs with the Trump-led Interior Department.

The panel, again, voted 19-25 to rebuff an amendment from Rep. Paul Gosar (R-Ariz.) that would have given the ranking member an equal say as the chair in when to issue subpoenas and to whom — though for the next two years, at least, this issue could be moot.

Despite his threats, Grijalva never did subpoena the Trump administration in 2020. Now, with a substantially friendlier Biden administration in place, he is not likely to need to use this authority in the immediate future, either.