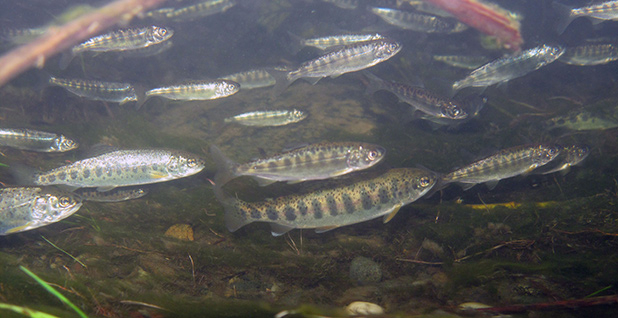 Three common and widely used farm pesticides can harm endangered salmon and jeopardize their survival, according to a new report by NOAA Fisheries.

The pesticides — chlorpyrifos, malathion and diazinon — also threaten orcas, since they eat salmon, the agency said.

The findings are included in a biological opinion that NOAA’s fisheries experts wrote for U.S. EPA.

It was made public this week by Earthjustice, a nonprofit environmental law organization that wants EPA to ban the chemicals.

Chlorpyrifos is widely applied on citrus, nuts and orchards, while malathion is used on more than 100 food crops, including alfalfa, cotton, rice and wheat, according to officials at Earthjustice.

"The best available science clearly shows these pesticides are a major threat to endangered salmon and to our orca whales, which need salmon to survive," said Patti Goldman, managing attorney at Earthjustice. "These pesticides are bad for people every way they are exposed to it and toxic to salmon."

CropLife America, a national trade association that represents the manufacturers, formulators and distributors of pesticides, said it is "carefully reviewing" the biological opinion, adding that it was done too quickly to allow "for appropriate engagement with the public and stakeholders."

"The denial of a requested extension of time to complete the opinion resulted in a document that has the potential to create exaggerated and unfounded concerns regarding threatened and endangered species and have a negative impact on farmers as well as public health protection," the association said in a statement.

NOAA Fisheries said it delivered the 3,417-page opinion earlier than planned due to a court-imposed deadline. The agency said it needed more time to address "a variety of technical and methodological issues."

"Getting more time would have also allowed [NOAA Fisheries] to engage with the public and stakeholders on a draft biological opinion prior to issuance of a final biological opinion, as originally planned and as recommended by the National Academies of Sciences," the agency said in a statement.

The report examined the effect of pesticides on salmon in several locations, including the Pacific Northwest and West Coast.

Conservation groups said they’ll use the new opinion to push EPA to ban the pesticides.

"Those of us who fight to protect and restore rivers and their critical fisheries are very pleased that the biological opinions were released," said Sharon Selvaggio, of Northwest Center for Alternatives to Pesticides. "To protect salmon, we need to respond to what the science is showing us."

In the late 1980s, salmon and steelhead fishing in Oregon, Washington, Idaho and Northern California brought in $1.25 billion each year and supported more than 62,000 jobs, Earthjustice said, adding that the "economic benefits of dwindling salmon have grown exponentially since then."

The group blamed the declining salmon runs on dams, climate change, a loss of habitat and pesticide runoff.

"Salmon have been waiting four decades for relief from toxic pesticides in many of our rivers," said Glen Spain, Northwest regional director of the Pacific Coast Federation of Fishermen’s Associations. "The agencies should do their job."