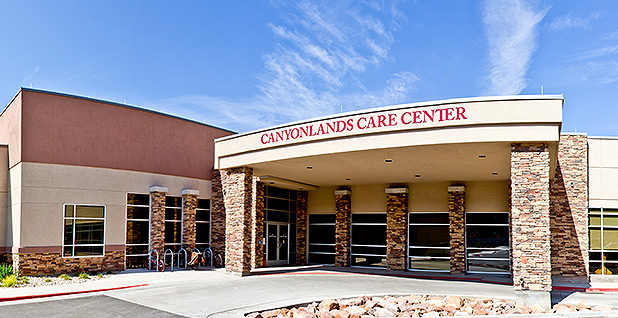 Communities near federal lands that are being mined for oil and gas fear that Congress could be on the verge of trashing a lifeline for strained state coffers.

If the Senate votes to repeal the Bureau of Land Management’s Methane and Waste Prevention Rule, states, tribes and federal taxpayers could lose out on millions of dollars in annual revenue that goes to support social services, higher education and other needs, local officials say.

Republican lawmakers are using the Congressional Review Act to repeal the rule, which is designed to reduce flaring, venting and leakage of natural gas from energy operations on public lands.

In Moab, Utah, a senior care facility hangs in the balance. The 36-bed Canyonlands Care Center receives two-thirds of its funding from Medicaid and one-third from private pay. But even at 90 percent occupancy, the facility’s finances still fell short. Mineral leasing dollars helped fill the gap for a time, but the oil bust dried up that revenue stream, prompting a successful appeal for the support of a new Grand County sales tax.

"You can’t rely on oil and gas revenues, and we learned that last year," said Kim Macfarlane, the home’s administrator.

But rolling back BLM’s rule would deal a fatal blow to the care center’s operations, she said. Collections on fossil fuels captured on public lands provide critical support to the facility’s budget, and BLM’s regulation helps ensure that natural gas withdrawn from federal tracts flows to the marketplace — not the atmosphere, Macfarlane said.

"If the rule were to disappear, then we’d have to close the doors," she said.

Shutting down or limiting the care center’s capacity would have a devastating effect on the community, Macfarlane said. The next closest facility is a 2.5-hour drive away.

"If your mom needed to be placed in a care unit, imagine having to go two hours to see her," she said. "It’s just not good for anybody."

While the Canyonlands Care Center would suffer the most immediate and severe impact from the BLM rule rollback, there are many other county projects whose debt loads are floated by federal leasing money, said Grand County Council Member Chris Baird. Those include the Moab Recreation and Aquatic Center, the Old Spanish Trail Arena and parts of the local airport. All are at various points of 20- to 30-year debt repayment plans, he said.

"Any reduction in federal leasing revenue certainly puts a lot of stress on local governments and creates the potential to have to raise property taxes," Baird said. "It’s a big issue."

The potential environmental implications of rolling back the BLM rule also have financial ramifications, Baird said. Nestled between the Arches and Canyonlands national parks, Moab — population 5,200 — has a robust recreation economy. Its red rocks and blue skies draw more than 1 million visitors to the tiny city each year, according to Moab’s website.

"We sell views," Baird said. "When you sell views, air quality is a big part of your economy."

States with economies closely tied to energy production are struggling to keep their programs funded in the face of drastically lower oil and gas prices.

In New Mexico, budget woes have sent many of the state’s services into a spiral. Public universities have discussed laying off staff members and shifting tuition costs back to families. The state’s courts have proposed halting jury trials due to a lack of funding.

A coalition of grass-roots groups sees the BLM rule as one part of the solution.

"It really is a common-sense solution. I think it’s one of those no-brainers," said James Jimenez, executive director of New Mexico Voices for Children. "Here we’re taking an asset that is finite in nature, and we’re basically throwing it away in ways that fiscally and from a health perspective don’t make sense. It’s profit-oriented at the expense of our health."

He cautioned that BLM’s regulation is not a silver bullet.

"Capturing the methane won’t be the sole solution to our budget problems, but it’s one of the things that helps," Jimenez said.

"Absent a repeal, funding for New Mexico’s schools, roads and healthcare will be dramatically reduced on account of the reduction in revenue generated by the oil and gas industry," Susana Martinez wrote in a Jan. 27 letter to House Speaker Paul Ryan (R-Wis.).

If BLM’s rule is allowed to stand, she said, new oil and gas development on federal lands will stagnate, reducing royalties paid to state and federal governments.

The BLM rule’s budgetary impact hinges on at least two factors: the market value of natural gas and whether industry would respond to the regulation by stopping production.

In its fact sheet on the Methane and Waste Prevention Rule, BLM cites a 2010 Government Accountability Office finding that states, tribes and federal taxpayers lose as much as $23 million in annual royalty revenue from escaped natural gas. The rule itself offers a much more conservative savings estimate of $3 million to $10 million per year.

The low end of that range is in line with an industry estimate that BLM’s rule would result in a $3.68 million benefit, after taking into consideration the value of gas in the marketplace. In 2008, which served as the reference point for the GAO report, natural gas prices rose to more than $13 per million British thermal units.

The market has changed drastically since then, the Western Energy Alliance wrote in its analysis. Natural gas prices hovered just above $3 per MMBtu.

"Adding in the economic marginal impact of the additional volume in a market landscape with heavy inventories it could easily be assumed that all of that volume may be much lower and could have a marginal value approaching $0," the alliance wrote.

Industry interests have also said that the effect of BLM’s rule would be to shut in production, resulting in a $114 million drop in tax dollars.

BLM has said that the intent of its rule is not to stop extraction. According to the same GAO report, 40 percent of gas now vented or flared from onshore federal leases could be captured using current technologies.