Community solar: A ray of hope in the gloom? 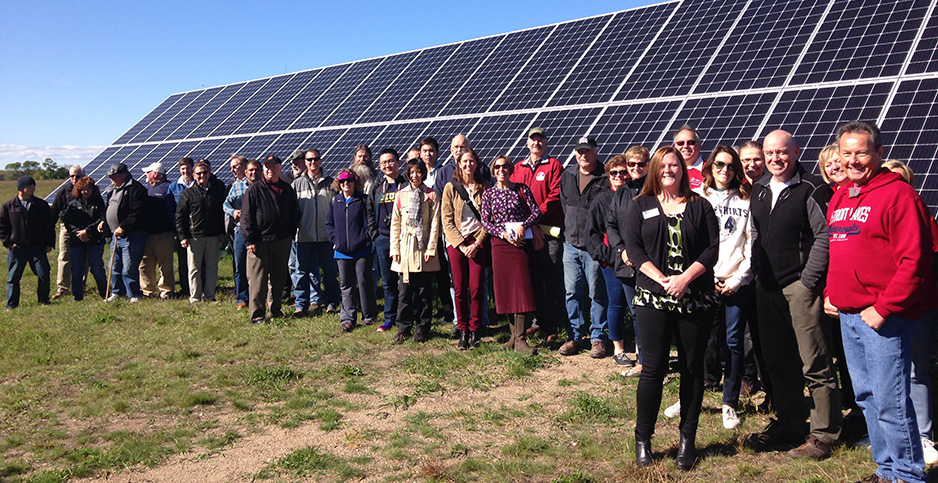 Community solar may fare better than other parts of the solar industry in the coronavirus downturn. Pictured is a 2017 tour of Detroit Lakes Public Utilities' community solar installation in Minnesota. @mncerts/Flickr

As energy companies of every stripe cope with the novel coronavirus distress, there’s one small segment that has a compelling pitch: solar power at home, no visit required.

Community solar is a fast-growing sector that offers residences and businesses solar in the form of shares in a common solar farm, rather than inviting strangers to install solar panels on the roof. Could it thrive in an era of social distancing?

The economy is so uncertain right now that even the companies that build and market these projects are hesitant to declare they’ll prevail.

But one indication speaks loudly at a time when millions are out of work: They’re hiring.

Two companies — Arcadia Power Inc., based in Washington, and Nexamp Inc. in Boston — said they are adding significantly to their staffs. That’s an enviable status in a time where clean energy jobs are in free fall (Energywire, April 8).

"We are seeing some effects from the current crisis in the form of permitting and construction slow-downs, but in general our outlook is very positive for 2020," said a Nexamp spokesman via email. "We are actively hiring for a number of positions and will likely grow another 25% in headcount during the year."

Community solar, also called shared solar or solar gardens, is a proposition that has great appeal but has been difficult to put into practice.

Solar advocates have for years wondered how to get the carbon-free benefits of solar to the millions of buildings that aren’t suited for it. Many are blocked by shade, not oriented to the sun’s rays, or have occupants who either don’t want solar panels on the roof or can’t afford them.

The shared-solar approach has utilities or private companies build solar arrays. The kilowatts of electricity they generate are sold as shares to utility customers, either on do-gooder merits or to save money on the electricity bill.

A logjam of obstacles that have prevented community solar’s acceptance is starting to break. At the same time, some wonder if the new social mores around the COVID-19 crisis could provide a jolt.

"Community solar is much better positioned to have its trajectory upward," said Joel Gamoran, the general manager of Arcadia.

Such confidence isn’t because America’s coronavirus shut-ins are suddenly clamoring for community solar but because the sector is starting to find some room in its regulatory straitjacket.

Solar gardens have subsisted on the margins of the electric grid for years. They have arrived utility by utility, since they are only built and used in a utility’s service territory, and state by state, since state regulatory commissions must sort through complex issues of ownership, transparency and equity.

Before the coronavirus happened, the notion of solar by share was crossing a threshold.

As of November, the country had 1.3 gigawatts of community solar built. But another 1.8 GW was in the pipeline, according to a presentation by the National Renewable Energy Laboratory.

And that was before that pipeline nearly doubled: Last month, Florida Power & Light Co. got approval for almost 1.5 GW of community solar arrays (Energywire, March 4).

"You’re seeing two things happen simultaneously: The established programs are able to move faster, and new states are opening up as well," said Gamoran of Arcadia, which manages community solar subscriptions for about 400,000 customers through about 80 solar gardens.

Colorado, Massachusetts, Minnesota and New York have been the leading shared-solar states, according to NREL. New regulatory approvals in the last few months in Illinois, Rhode Island and Virginia have further added to the trend.

"Before coronavirus happened, there was no reason to think that trend was going to change," said Warren Leon, the executive director of the Clean Energy States Alliance, which tracks energy developments.

But coronavirus did happen, and no one is sure what comes next.

What do customers want?

The question marks around community solar in the coronavirus crash are like those facing energy companies on one side and customer-facing businesses like retailers and restaurants on the other.

Construction of solar gardens are beset by the same woes of any construction project: Supply chains are slow, workers are staying home to keep themselves healthy, and permitting agencies are working at a snail’s crawl.

"We have all kinds of problems with people not showing up for work and how to keep social distancing on-site," said Eric Blank, the co-founder of Community Energy, a solar builder that has four solar gardens under construction in Colorado.

Meanwhile, it is too early to tell whether the COVID-19 crisis will alter the behavior and outlook of homeowners and apartment dwellers.

"There may be people at home who have some additional disposable time who want to do something for society that would also allow them to save money, and they may be receptive to that marketing pitch in a way they weren’t before," Leon said.

He added, "Or are those people at home, worrying about their pocketbook and deciding that they don’t want to make a decision about anything?"

In any case, recruiting those customers suddenly looks very different.

Nexamp usually gets its name out through in-person community events with groups like United Way or the YMCA but now has to rely more on digital advertisements through Facebook and Google and virtual town meetings via webinar.

"That forces you to engage with your customers digitally, and that’s a big change," said Nexamp CEO Zaid Ashai.

All of the companies interviewed for this article said they were hiring and are finding an abundance of talent available as the country hurtles into a recession.

Nexamp, which has strong financial backing in the form of ownership by a subsidiary of corporate giant Mitsubishi Corp., is navigating how to vet candidates without meeting them in person. Arcadia is adding five people to its 130-person workforce and expects five more hires by year’s end. Community Energy plans to add a couple of people, Blank said.

It will offer the positions, he said, "probably at bargain salaries compared to a few months ago."