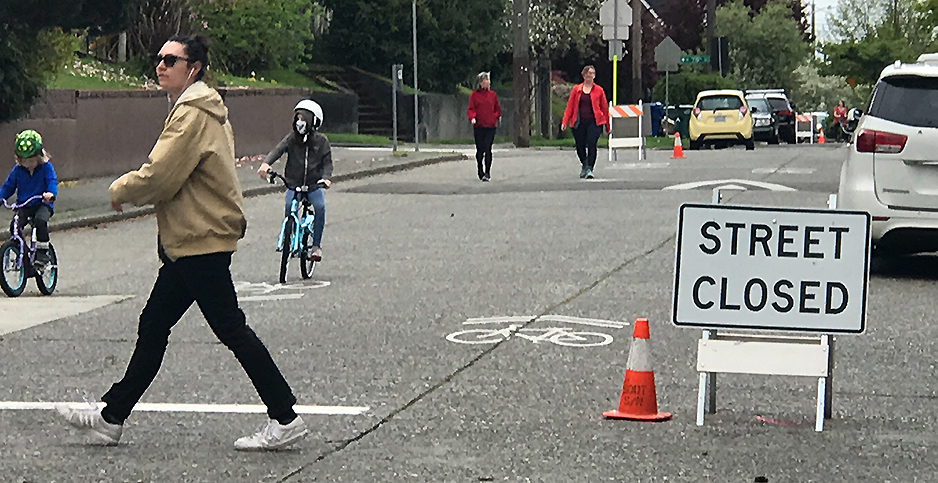 Seattle and other cities have closed some streets to car traffic during the pandemic. Seattle Department of Transportation/Flickr

In Seattle, city officials have permanently closed 20 miles of streets to provide more space for residents under lockdown to bike and walk.

And Facebook Inc. recently announced it would allow up to half of its employees to work from home by 2030.

Without question, the coronavirus pandemic is changing where people work and how they get around.

Analysts say it’s an unprecedented experiment in altering transportation patterns — one with the potential to reshape global oil markets and the world’s emissions trajectory.

"People for the first time, in an accidental experiment, are seeing what carless streets could mean for cities. People are for the first time realizing we can have safer cities with clean air," said Ani Dasgupta, who leads the Ross Center for Sustainable Cities at the World Resources Institute.

But all these changes come with two big questions. Will they stick around? And will they have an appreciable impact on emissions?

On one hand, measures such as street closures and new bike lanes could lead to less driving, which would reduce carbon emissions and oil demand.

On the other, lingering concerns about public transit could put more people back in their cars, sending pollution and oil consumption soaring.

Several analysts said the most consequential change is likely to come from telework, which has the potential to reshape the way cities look and operate. The economic lockdowns associated with the pandemic offer a preview of the potential impact on emissions.

Roughly a third of household vehicle miles traveled is associated with commuting, according to the 2017 National Household Travel Survey. But since local leaders began imposing lockdowns in March, traffic levels dropped by 48% in early April and have fallen an average of 29%, according to Inrix, a traffic consultancy.

The Rhodium Group, an economic consulting firm, estimates transportation accounted for slightly more than half of the 20% drop in American carbon dioxide emissions recorded since the United States went into lockdown.

There are emerging signs those changes could last, as white-collar workers prepare to telework for the foreseeable future. Silicon Valley, in particular, seems predisposed to change.

"In terms of reducing [vehicle miles traveled], I agree that experiences with walking and biking have increased among many households and may promote increases in those activities even after the pandemic has passed," said Mike Vandenbergh, director of the Climate Change Research Network at Vanderbilt Law School.

"But I think the larger effect on driving is going to be from reductions in commuting," he said. "I think that many employers are going to begin to give employees the option of not working in the office at least every day."

In emissions terms, that equates to a 1.5% decrease in global CO2 output, Klein said.

The world would need an emissions reduction of 25 times that to limit a global temperature rise to 2 degrees Celsius by midcentury, he said.

"Some changes on the fringes from behavior are not going to get you there," Klein said. "You are going to need larger reductions in emissions from oil, but also gas and coal, not necessarily driven by consumer choice."

‘A central part of American life’

Some changes already are visible to Americans around the country.

Since governors began issuing stay-at-home orders, 45 U.S. cities and localities have closed a total of more than 300 miles to car traffic, according to a running tally by the Rails-to-Trails Conservancy, a nonprofit organization that advocates for trail use.

Oakland, Calif., has closed 74 miles, Minneapolis has shut more than 20 miles, according to a separate tally by Mike Lydon, a principal at the urban planning firm Street Plans. But only two municipalities — Seattle and Montgomery County, Md. — have decided to make the closures permanent. The rest envision the initiatives ending once the pandemic has ebbed.

In Seattle, the changes were a long time coming. The city has invested in bike infrastructure since the 1970s, and the streets on its closure list already were equipped with speed bumps and traffic circles designed to slow vehicle speeds. Crucially, those changes were made with community support. Now, motorists are greeted by signs saying the roads are closed, although those who live on, visit or make deliveries on the street are still allowed to drive there.

Ethan Bergerson, a spokesman for the Seattle Department of Transportation, framed the move as "road openings," intended to make streets more inviting to other uses.

The city conceived of the idea as a response to the pandemic, but the change also served Seattle’s long-term sustainability and wellness goals, he said. The openings will continue after the lockdown ends and figure to be particularly important for those who remain wary of taking public transit, Bergerson said.

"Once the economy starts to ramp up again, it won’t get back to the old normal," he said. "This makes a lot of sense as a permanent fixture, realizing that going forward this is how a lot of people will get around."

The sentiment was echoed by Gordon Padelford, executive director of Seattle Neighborhood Greenways, an advocacy group that pushed for the closures. Cities need to rethink how streets are used, given that the majority of urban trips are less than 3 miles, he said.

"Instead of thinking of streets as only places for moving vehicles, we wanted to start thinking about them as being for moving people," he said. "That should be a central part of American life as well."

Whether the changes become permanent depends in large part on the outlook of city leaders, said Yonah Freemark, who studies mobility and urban planning at the Massachusetts Institute of Technology.

The mayors of Oakland, Paris and London already have made biking and walking priorities, and they are likely to continue pursuing those goals following the pandemic. But other city leaders, such as New York Mayor Bill de Blasio, have resisted opening city streets to nonvehicular traffic in the past, Freemark said.

"I could imagine that they would take away these facilities as soon as they reasonably can," he said.

Despite the momentum around teleworking and street closures, several analysts said the coronavirus crisis could just as easily result in changes that increase driving and emissions.

At the top of the list is declining public transit use. Ridership has plummeted across the country amid the pandemic, as many people fear being exposed to COVID-19 and other diseases in the close quarters of buses and subways (Climatewire, May 6).

A continuation of that trend could have a cascading effect. Fewer passengers would erode the finances of transit authorities, leading to worse service and, eventually, even fewer riders. A migration from the cities to suburbs could similarly push emissions higher.

"It may be that we can develop ways to get people comfortable in large numbers with mass transport again," he said. "But the expansion of mass transport seems less likely to me than it did a year ago."

A mass exodus from public transit would have a devastating effect on cities like San Francisco, where downtown gridlock frustrated drivers prior to the pandemic, according to San Francisco Municipal Transportation Agency Director Jeff Tumlin.

"If San Francisco retreats in a fear-based way to private cars, the city dies with that, including the economy. Why? Because we can’t move more cars. That’s a fundamental geometrical limit," Tumlin recently declared.

There are already signs that as people emerge from lockdown, they feel more comfortable in their cars (Climatewire, May 15).

Data from Apple Inc. showed that driving was up 2% nationwide Friday compared with early January, while public transit ridership was down 67%. And in China, which has begun easing restrictions, driving has bounced back and oil demand was near 90% of last year’s levels, according to IHS Markit Ltd.

But environmental advocates like Dasgupta, of the World Resources Institute, are holding out hope. Regardless of how the crisis reshapes urban areas, they see it as a once-in-a-lifetime opportunity to push for changes like street closures that didn’t seem possible beforehand.

"This is the moment for us to reexamine what is possible, but also use the leverage to change things," Dasgupta said. "One of the things we’ve realized from coronavirus is big asks are possible."