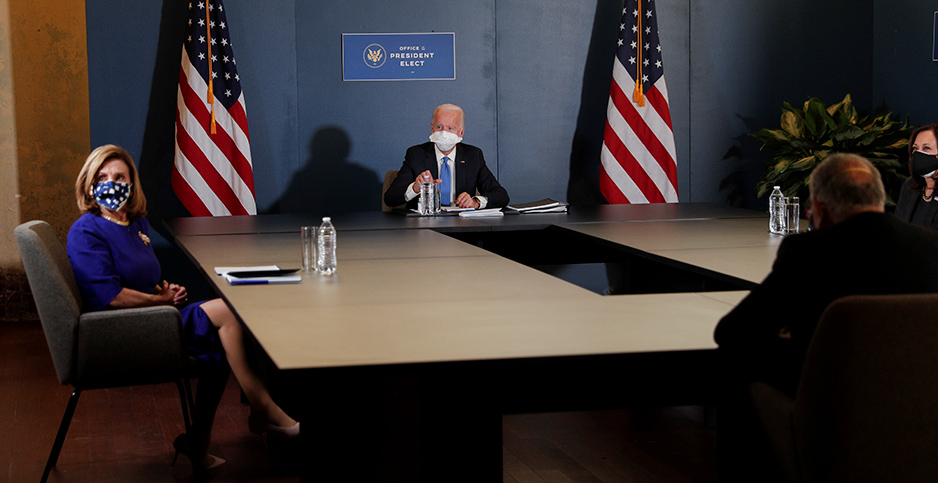 Some major companies are angling to line up with the Biden administration on climate next year, as lawmakers and lobbyists gird for renewed policy fights in Washington.

A big slice of corporate America — including utilities, banks and auto manufacturers — signed onto a statement yesterday calling on President-elect Joe Biden to work with Congress on "ambitious, durable, bipartisan climate solutions."

While the statement doesn’t offer support for a specific policy, its signatories represent a cross section of the U.S. economy, including Amazon.com Inc., Bank of America Corp., BP PLC, Walmart Inc., DSM and Exelon Corp.

"To achieve a net-zero economy, the United States must establish durable national policies that harness market forces, mobilize investment and innovation, and provide the certainty needed to plan for the long term," they wrote.

Organized by the Center for Climate and Energy Solutions, or C2ES, the statement comes amid a raft of corporate signaling on climate, as Biden enters office with an ambitious clean energy platform.

It’s signaling that could be indicative of the policy fights to come in the next few years, with companies pushing for carbon pricing and progressives increasingly looking to regulation and spending with the prospect of divided government looming next year.

"We faced, I think it goes without saying, some head winds with the past administration on a lot of these fronts," Hugh Welsh, president and general counsel of DSM North America, said during a virtual event with the CEO Climate Dialogue yesterday. "I think we all believe that we’ll enjoy some tail wind going forward."

Meanwhile, the Business Roundtable, a major trade organization, announced earlier this year that it supports carbon pricing, aligning itself with various energy companies and business groups like the CEO Climate Dialogue (Greenwire, Sept. 16).

And more recently, the U.S. Chamber of Commerce, long a foe of climate policy on Capitol Hill, circulated a questionnaire to certain members last week asking their opinions on a price on carbon and what should be done with the revenue, Welsh said.

"Just being asked that question for the U.S. Chamber I found to be encouraging," said Welsh, who has been active in recent years in pushing for pro-climate advocacy from within the organization.

Welsh’s company and a wide selection of others publicly support carbon pricing, but it remains to be seen where the major trade groups, which have historically held heavy sway in the Capitol, will land.

But the Chamber, in particular, has gradually shifted its stance in the last two years, coming out in favor of the Paris climate agreement and forming a "Task Force on Climate Actions" to explore its members’ opinions on carbon pricing and other policy questions.

Chamber spokesman Matt Letourneau didn’t confirm the carbon pricing questionnaire but said the group "engaged in substantive dialogue with our members on ways the business community can continue to advance climate and sustainability priorities."

"While we don’t share specific internal member discussions, we can confirm that we regularly communicate and seek input on a range of issues with our members through a variety of means and will continue to do so," Letourneau said.

Still, Welsh and other executives said yesterday that they see a price on carbon as inevitable, even as progressives and climate activists increasingly are turning away from the policy in favor of heavy spending on clean energy and infrastructure.

"I don’t know that it’s doable this Congress, but hopefully within the next couple of Congresses it will be, so we’re going to keep pushing," Calpine Corp. CEO Thad Hill said.

While the incoming Biden administration has prompted some additional climate wrangling in the corporate world, the landscape has shifted dramatically with the economy under the Trump administration.

Under pressure from activists and investors, a wide range of companies have set goals in recent years to slash emissions from their own operations.

Sea-level rise, hurricanes and wildfires — as well as the pandemic-induced oil crash earlier this year — have also set off alarm bells among economists about how climate change could affect coastal property and fossil fuel assets.

Environmental, social and governance (ESG) investing and divestment from fossil fuels have in recent years gone from largely political statements by a handful of institutions to a serious consideration in the financial community, said C2ES President Bob Perciasepe.

"I don’t think it’s a boutique thing anymore," Perciasepe said during the CEO Climate Dialogue event. "I think the sophistication of thinking ahead to the future, and who is going to be prepared for that economy in 2050, as opposed to the economy in 1950, is going to be on the minds of a lot of people."

Welsh, for example, said that DSM has heard more about climate change from investors and financial institutions in the last 18 months than he had in the previous 18 years.

During quarterly shareholder calls, Welsh said, DSM rarely got questions about its sustainability or climate initiatives.

"That began to change about a year ago, where we went from zero questions on these initiatives to analysts asking quite a few questions about how our different innovations were working out, where we were going to invest money in the future that was consistent with our climate strategy," Welsh said.

"And we came to learn that over the course of the last year, our shareholding group is now self-identified as about 43% ESG shareholders, which is remarkable for a company like ours that’s been around for 116 years," he said.