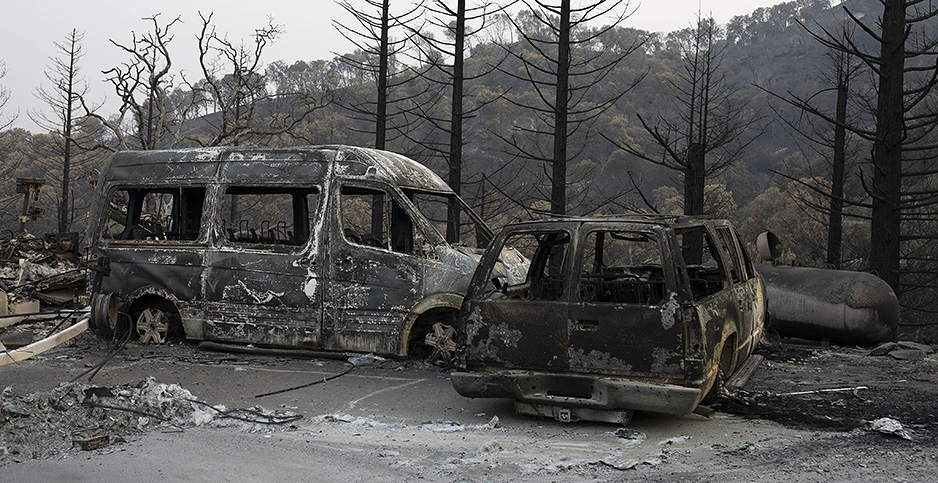 Burned vehicles pictured last week after a wildfire swept through Vacaville, Calif. Areas of the state will experience record heat this weekend as California enters the heart of fire season. CHINE NOUVELLE/SIPA/Newscom

A blistering heat wave is expected to engulf much of California this weekend, with temperatures potentially soaring as high as 115 degrees in the southern part of the state. The National Weather Service has warned of an elevated risk of wildfires, even as firefighters work to contain blazes already burning across the state.

The combination of sweltering heat and ongoing wildfires is a worrying double whammy, experts say. High temperatures can make it easier for wildfires to ignite and spread in the first place. And they can also affect local air quality, adding to the impact of wildfire smoke.

When both occur at once, each can worsen the effects of the other — an example of what’s known as a "compound climate event."

Heat waves affect air quality mainly through their influence on ground-level ozone, a major ingredient in smog. It’s the same chemical that makes up the ozone layer high in the atmosphere, which helps protect the Earth from ultraviolet radiation. But when it’s found closer to the Earth’s surface, it’s a dangerous pollutant.

When ground-level ozone builds up, it becomes a major hazard to public health. It can irritate the throat and lungs and make it difficult to breathe, especially for people with asthma, emphysema or other pre-existing respiratory conditions. In extreme cases, its effects can be life-threatening.

Heat waves can make ozone pollution worse. They can increase the chemical reactions that cause ozone to build up in the air.

That’s partly because high temperatures speed up these chemical reactions. Heat waves also tend to occur under persistent, high-pressure weather systems, often associated with still, stagnant air. These conditions also make it easier for ozone to build up near the Earth’s surface.

At the same time, wildfire smoke has a huge effect on air quality as well.

Wildfires can also produce the types of chemicals that cause ozone to build up in the air, although research suggests the amount may depend on factors like the temperature of the burn and the type of vegetation that’s burning.

The combination of both wildfires and extreme heat can increase the risk of exposure to both particulate matter and ozone pollution at the same time. Air quality advisories issued by South Coast AQMD earlier during last month’s heat wave warned of both threats.

"What happened this year in August — the two things came together at the same time, stagnant conditions and wildfires," Fine said. "So the smoke from the wildfires really stuck with us, combined with the pollution we already have during the summer. And that’s when we think we saw some pretty big impacts on ozone levels from wildfires."

And now, another heat wave is about to strike.

It’s a concern for public health, with fires still blazing across the state. Research suggests that combinations of extreme heat and high levels of air pollution — both ozone and particulate matter — can increase the risk of severe illness and death.

That’s because heat itself is also a public health hazard. Extreme heat can increase the risk of cardiovascular and respiratory illness and can make people even more vulnerable to the effects of air pollution.

That’s true whether the air pollution comes from wildfires or industrial activity.

Relatively few studies have looked specifically at the combined health effects of heat waves and wildfires. But at least one case study suggests the two can interact with deadly consequences.

Ten years ago, an extreme heat wave hit Moscow and a spate of wildfires broke out across Russia. A subsequent study, published in the journal Epidemiology, indicated that the combination of high heat and air pollution from the fires contributed to thousands of excess deaths.

In general, climate models project that heat waves will become more frequent and more severe across much of the world in the coming decades. And studies suggest that this, combined with air pollution, could have a big effect on public health.

A study published last year in Proceedings of the National Academy of Sciences predicts that future increases in heat waves and stagnant weather conditions will worsen air quality for a majority of the population of China. The study suggests that, even under a relatively moderate future climate change scenario, thousands more people across the country will die each year by the middle of this century.

Another study, just published in April in the journal AGU Advances, found that a severe future climate change scenario would substantially increase the number of days each year that extreme heat and high levels of air pollution occur at the same time across South Asia.

Such studies are a reminder of the ways that climate change can worsen existing threats to public health.

In California, rising temperatures are also expected to worsen the severity of wildfires. In fact, research suggests that climate change has already increased the amount of area burned by Western wildfires each year over the last few decades.

That means compound events like this summer’s extreme heat and raging fires could happen more often in the future.

For now, Fine advises residents of California to pay attention to local air quality advisories and to play it safe when conditions are bad. Certain types of medical-grade masks can provide some benefits against air pollution, but there’s generally no complete protection.