Concerns grow about herbicide use in wildfires’ wake 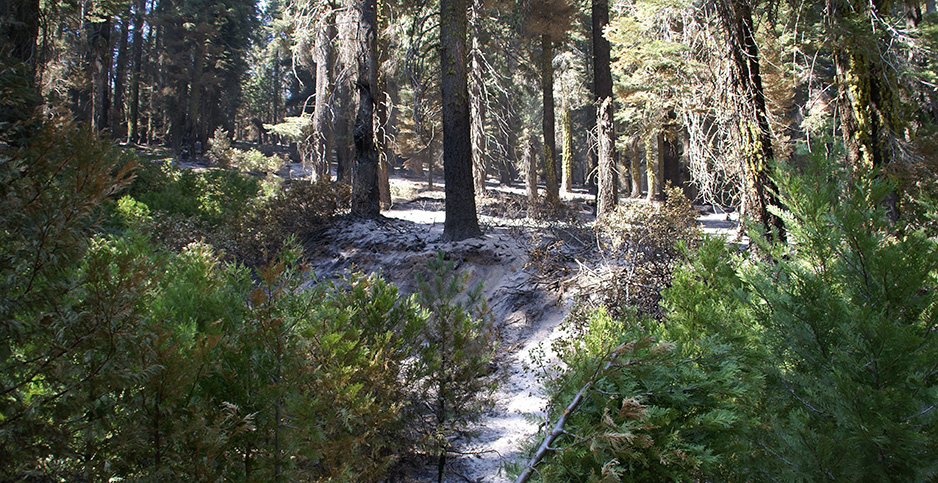 Plants growing in on the floor of Stanislaus National Forest after a wildfire. Department of Agriculture/Flickr

First, the wildfires came to California and Oregon, scorching hundreds of thousands of acres of national forests.

Next, weeds will sprout on those blackened lands. They’ll be followed quickly by chemical weedkillers like glyphosate, as the Forest Service tries to make trees grow again.

That cycle of fire and reforestation, aided by herbicides, is likely to accelerate if climate change-induced wildfires increase as scientists predict, and as federal forest management policies tilt toward a more intensive approach to clearing potential fuel for the blazes.

The Forest Service’s use of herbicides and pesticides has raised occasional alarm from environmental groups, which point to the chemical’s potential to harm wildlife or water supplies, or to have long-term effects on people who apply them. In some regions, they say, scarcely a tree-planting project occurs without the use of chemical herbicides.

"We need to rethink the way we manage forests," said Joe Trudeau, Southwest conservation advocate for the Center for Biological Diversity, which largely opposes pesticides and favors a less intensive approach to forestry. "How long are we going to manage these forests in a way that’s wrong?"

Like farmers, the Forest Service is forced to balance the risks and benefits and to use a wide variety of chemicals to ward off resistance in weeds. Some chemicals used years ago, such as atrazine, have fallen out of favor because of those dangers; atrazine can poison waterways and cause developmental defects in frogs, among other effects. Others, like glyphosate, have become more common, with benefits and risks of their own.

Herbicide use on national forests is a small fraction of what’s used in agriculture, but the agency faces the same challenge farmers do: searching for new chemical weapons as old ones don’t work as well or are further restricted due to health concerns.

Glyphosate is a clear favorite. In California, the Forest Service used 16,740 pounds of that herbicide on 5,726 acres in fiscal 2018, more than double the amount the prior year. In fiscal 2016, the agency used 3,805 pounds of glyphosate on 2,340 acres, according to the most recent reports filed for that region.

Glyphosate, sold under the brand name Roundup, is much less prevalent in forests that on farms. In the agency’s last risk assessment, from 2011, the Forest Service said agricultural use is more than 2,000 times greater, adding, "Thus, there is no reason to believe that Forest Service programs will contribute substantially to general concentrations of glyphosate nationally."

Herbicides are also just one of the service’s tools against weeds, and they’re not a blanket approach, said Rick Cooksey, acting director of forest health protection. He said common weeds include cheatgrass, which sprouts on fire-scorched land and is itself a wildfire risk, and "mile a minute" weed.

"Use of any herbicide or pesticide is extremely site-specific," he said, adding that less than half of 1% of national forest system lands are treated with them.

Trudeau has spoken out recently about a restoration project in the 3.3 million-acre Gila National Forest in New Mexico, where the service said it plans to use a variety of chemicals including the weedkiller dicamba, which has a history of drifting where it’s not intended.

In a letter to the Albuquerque Journal, Trudeau said the Forest Service "wants to unleash a flood of toxic chemicals across this sanctuary, serving up a cocktail of 21 dangerous herbicides for use across the forest."

Herbicide fights have bubbled up elsewhere, too, including in the Mark Twain National Forest in Missouri, where weedkillers are part of an ongoing forest restoration project.

Oregon and neighboring states are key in the debate, Trudeau told E&E News. "Forest management is dangerously reliant on herbicide use in the Pacific Northwest," he added.

For glyphosate, the agency has reiterated the view of EPA that the weedkiller doesn’t cause cancer — a debate that’s become heated since the International Agency for Research on Cancer called it a probable carcinogen in 2015. That fight continues to play out, as glyphosate critics push for it to be banned.

The bigger risk in glyphosate may not be the herbicide itself, but the ingredients used in the mix to help it stick to weeds. The Forest Service in its risk assessment has said little about how chemicals play into forest management.

Democrats and Republicans are split about how aggressively to thin forests to protect against wildfire. But there’s wide agreement about boosting reforestation, to help with carbon sequestration and other purposes.

To Trudeau, the battle over herbicides is one skirmish in the bigger conflict about how forests have been managed for decades, beginning with an overly aggressive approach to putting out wildfires. Forest ecologists largely agree that excluding fire from forests led to a buildup of fuels and that climate change has created conditions favorable to big blazes.

"These fires reflect all the mistakes we’ve made in forest management since we settled the West," Trudeau said. "We need to be converting to a system that emulates nature, like the way fire would."