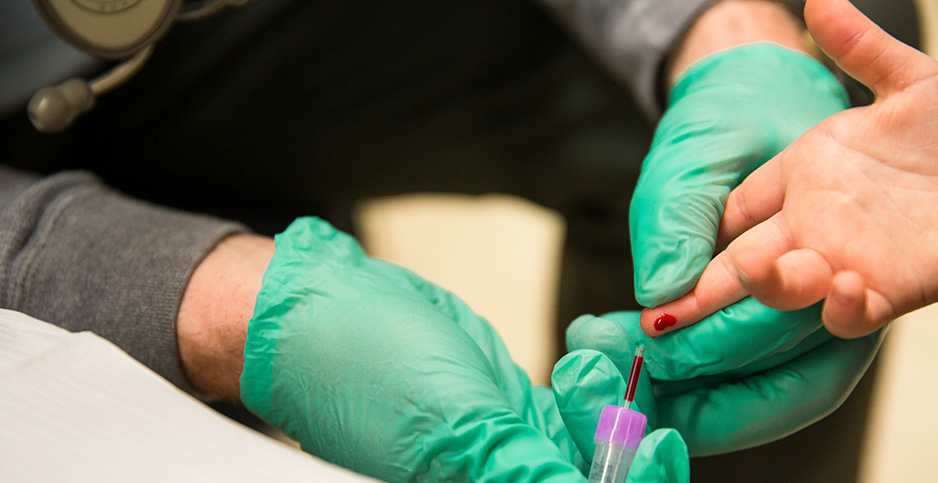 A child having blood drawn for a lead screening. Brett Carlsen/Getty Images

As the COVID-19 pandemic began shutting down states and businesses last year, public health officials saw another slowdown: Fewer babies and toddlers were being tested for lead exposure.

The lead blood tests, usually conducted at 1 and 2 years of age, are critical for determining when kids have been exposed to unsafe levels of the neurotoxin. High lead levels in kids’ blood can trigger a variety of medical, nutritional and educational interventions and can even help families identify and eliminate or reduce sources of lead exposure to their children.

But blood lead testing dropped by an average of 24% in the first five months of 2020 compared with previous years, hitting a low of 65% less than the year before in April as the pandemic surged. Centers for Disease Control and Prevention officials say preliminary information shows that while testing rates have increased since the spring, they are still not up to pre-pandemic levels.

Public health officials fear that means many exposed children may have fallen through the cracks at the same time the pandemic may have forced them to spend more time in homes with lead hazards. Indeed, the CDC estimates that elevated blood lead levels would have been found in at least 10,000 of the untested children.

"We don’t want an increase in lead-exposed children to be an unintended consequence of the pandemic," said Jen McDonald, a consulting physician with the Michigan Department of Health and Human Services’ Division of Environmental Health.

The drop in testing is largely attributed to parents’ fears that going to the doctor could expose them or their children to the coronavirus, as well as the economic downturn and school closures that made it more logistically difficult for parents to take their kids to the pediatrician.

As COVID-19 cases surged last spring, health officials advised parents to take their children to so-called well visits, reminding them that vaccinations for other illnesses were vital. While preliminary data from the CDC shows that lead testing rates have increased since they plummeted at the beginning of the pandemic, there is still an overall decrease in the number of kids being tested as compared to previous years.

Michigan saw one of the largest drops in child lead tests last spring — a whopping 76% fewer in April 2020 compared with the year before. Though there are no demographic records for which children might have missed testing, McDonald said there is good reason to believe that the kids who were not tested are among the most vulnerable to lead hazards.

Low-income families and families of color are more likely to live in homes with lead-based paint or leaded pipes because they are often found in older housing that has not been updated. That’s why some states, including Michigan, require blood lead tests for children on Medicaid or who receive aid from the revised Supplemental Nutrition Program for Women, Infants and Children (WIC). Children who do not rely on those services are only tested if their parents believe they may have been exposed to lead or if they show developmental delays.

WIC clinics can often be a primary source of health care — including lead tests — for low-income families, but in Michigan, many WIC clinics have been closed for much of the pandemic, even as pediatric offices remained open.

"Those are the children who are at higher risk of lead exposure, and this is at a time when we think kids are spending more time in the home, and we know most lead exposure happens in the home from deteriorated paint, contaminated dust and soil," McDonald said. "But if we are not testing children, we are missing the chance to help them."

In an effort to boost testing levels in marginalized communities this year, Michigan is deploying mobile health units to conduct blood lead testing events in areas where lead contamination has historically been a problem. Other states will be running multimedia advertising campaigns reminding parents to have their children tested for lead at their medical appointments, with the hope that more children will return to their pediatricians as their parents become vaccinated and fears of the coronavirus ebb.

While testing children later is better than not testing them at all, American Academy of Pediatrics Council on Environmental Health Chair Dr. Aparna Bole noted that lead tests are mandated for specific ages because of how children develop. Babies fed with formula mixed with tap water, for example, are at higher risk of lead exposure from pipes. And babies and toddlers who crawl and put their hands in their mouths are at increased risk of accidentally ingesting lead in dust or paint chips.

However they are exposed, babies and toddlers are more susceptible to the effects of the neurotoxin because of the rapid rates at which their brains are developing.

"We know the higher the level, the more sustained it is, the more likely it is that the toxicity will be significant," Bole said. "There is no cutoff where we know lead is safe, but the higher and longer it is, the worse the effects are going to be, and you are more likely to have a higher and long exposure if we are not catching it in these tests."

‘The earlier we intervene, the better’

What’s more, in many areas, early intervention services for children who do have high levels of lead in their blood stop at age 3. So a child who was 2 years old in 2020 but wasn’t brought to their pediatrician until their parents were vaccinated after their third birthday would not be eligible for certain services if their blood tests show high levels of lead.

Though a doctor could still refer a patient to developmental specialists like occupational or speech therapists if they were showing delays, Bole says, "usually a child that young with an elevated lead level isn’t showing a delay yet."

"We want to refer them to these interventions early to provide proactive support and assessment because we know the earlier we intervene, the better," Bole said.

It is not clear whether interventions for children who were tested for lead have similarly declined during the pandemic, though there are indications that at least some services have declined.

In Washington, for example, where lead testing dropped 42% in the beginning of 2020, the pandemic limited in-home visits from lead inspectors. Instead, the Department of Energy and Environment conducted "virtual assessments" of homes’ interiors and in-person physical inspections of their exteriors, a spokesperson said.

Similarly, Delaware’s Division of Public Health says "remediation of homes with lead paint hazards did decline during the pandemic because of COVID-19 concerns," though spokesperson Sharon Smith said she expects those efforts will pick up again this summer.

A survey conducted by the National Environmental Health Association last spring found that environmental health workers at the local, state and federal level all reported being assigned new pandemic-related work, either adding COVID-19-related responsibilities to their usual workload or being reassigned to work on the coronavirus entirely. Thirteen percent of respondents said they were not conducting environmental health inspections, which could include inspections for lead.

"In addition to fears about inspectors or case workers being exposed to COVID, there truly may not have been the bandwidth for people to split their attention between the pandemic and their day job, which could mean less lead-related interventions," said Natasha DeJarnett, a professor at the University of Louisville who used to work at the association. "So while we have this pandemic where we need to use all the resources we can, the really big question is: What is happening to children’s lead levels, and how are we helping those with high levels during this time?"

Joseph Courtney, a senior epidemiologist with the CDC’s Lead Poisoning Prevention and Environmental Health Tracking Branch, said the agency is "committed to expanding the number of children tested to even higher levels than before the pandemic and to make sure any children who were missed get tested as soon as possible."

This spring, the CDC announced $100,000,000 in grant funding toward programs that help decrease childhood lead exposure, including by testing kids for lead.

"Early identification of children with higher blood lead levels can help limit additional exposure by identifying and eliminating sources of lead in a child’s environment, which will reduce their blood lead level over time," he wrote in an email.