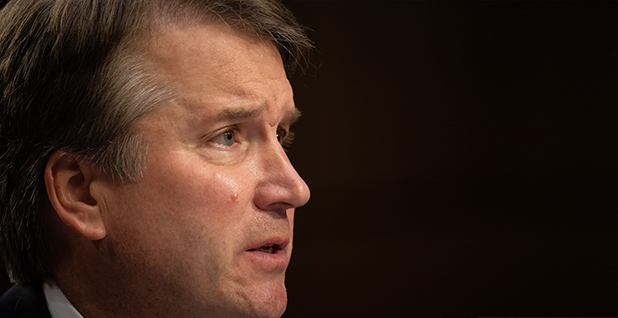 The Senate Judiciary Committee will hear testimony next week from Supreme Court nominee Brett Kavanaugh and the California professor who accused him of sexually assaulting her at a party three decades ago, as Senate Republicans move to steady a nomination that appeared on the verge of collapsing.

Responding to calls from senators in both parties, Judiciary Chairman Chuck Grassley (R-Iowa) announced that the panel will meet Monday morning to review the allegations made against Kavanaugh by Christine Blasey Ford, a clinical psychology professor at Palo Alto University who has accused the U.S. Court of Appeals for the District of Columbia Circuit judge of attempting to forcibly remove her clothes at a high-school party 36 years ago.

"As I said earlier, anyone who comes forward as Dr. Ford has done deserves to be heard," Grassley said in a statement, adding that his staff had "reached out to Dr. Ford to hear her account, and they held a follow-up call with Judge Kavanaugh this afternoon."

Judiciary Democrats "refused to join us" in the effort, Grassley said in announcing Monday’s hearing "to provide ample transparency."

However, his statement was silent on whether Thursday’s scheduled vote on Kavanaugh’s nomination would be postponed, as committee Democrats requested yesterday, or go on as planned. Grassley’s office did not respond to requests for comment.

The hearing announcement followed a growing chorus of senators who said they wanted Kavanaugh and Ford to appear before the Judiciary Committee to publicly answer questions about the alleged incident.

Sen. Susan Collins told reporters she spoke with Grassley earlier yesterday afternoon and that it was her understanding that Judiciary Republicans were huddling to figure out how to proceed.

"I believe that it’s very important that both Professor Ford and Judge Kavanaugh testify under oath about these allegations," the Maine Republican said. "And for my part, I need to see them and listen to their answers to the questions in order to make any sense of it."

Collins is a key confirmation vote; she has been under pressure to oppose Kavanaugh’s nomination. She said she last talked to the judge Friday, before she knew the accuser’s identity.

"I did bring up the letter," Collins said. "He categorically and emphatically denied that there was any proof at all to the allegations. I asked him if he knew who might be making such allegations, and he said he didn’t know. This was before her [Ford’s] identity became public," she added.

Sen. Orrin Hatch (R-Utah), a former chairman of the Judiciary Committee, said Kavanaugh denied being at the party where the alleged assault occurred during a phone conversation yesterday afternoon.

"The judge, who I know very, very well as an honest man, said this did not happen," Hatch told reporters, adding that he believes Kavanaugh’s account. "He’s a person with immense integrity."

Hatch said he did not know how Kavanaugh knew the date of the alleged attack, which has not been publicized. But Hatch echoed calls by senators from both parties for the matter to be investigated and soon.

"This is a serious charge, it has to be investigated, we have to have hearings, and I’m going to look forward to those hearings and doing whatever is essential in this matter," he said. "We should get this cleared up as soon as possible."

Other Republicans yesterday afternoon were not as chatty with reporters on the subject.

Judiciary Committee member Ted Cruz (R-Texas) referred reporters to his earlier statement on the matter, in which he said Ford’s allegations were "serious" and "deserve to be treated with respect."

He has also said that both Ford and Kavanaugh should be able to tell their stories in front of the panel. The Texan did not respond when a reporter asked him if he believed Ford.

Sen. John Thune (R-S.D.) deferred to the Judiciary Committee when reporters asked if the panel should delay Thursday’s confirmation vote but noted the committee has made it "pretty clear" that they intend to give Ford an opportunity to be heard.

"Whether or not that leads to a change in schedule, I think that’s going to be up to them based on the input that they get from her," he said.

"The sooner, the better," Shelby said. "Everybody’s entitled to due process — the accuser and the accused — so I’m going to see how it works out."

Before the hearing announcement, Senate Majority Leader Mitch McConnell (R-Ky.) showed no signs yesterday of slowing down the confirmation process for the nominee, praising Grassley for pursuing interviews of Kavanaugh and Ford.

Raising his voice while delivering opening remarks to the chamber, McConnell slammed Democrats for sitting on the allegations until the week of the vote, noting that Sen. Dianne Feinstein (D-Calif.), the ranking member on Judiciary, knew about the charges for six weeks.

"Now at the eleventh hour, with committee votes on schedule, after Democrats have spent weeks and weeks searching for any possible reason that this nomination should be delayed, now they choose to introduce this," McConnell complained.

But given the seriousness of the allegations, "the Senate must not, it cannot conduct a haphazard, slipshod review of Dr. Ford’s claims or be rushed to a vote," Minority Leader Chuck Schumer (D-N.Y.) said in his own floor speech. "There must be time for the FBI to do its work and for the Judiciary Committee to properly prepare to hear testimony from Dr. Ford and Judge Kavanaugh."

Activists are also weighing in. Yesterday a roster of groups — including the Center for Biological Diversity, League of Conservation Voters, Endangered Species Coalition — demanded more scrutiny of Kavanaugh.

On the other side, the Judicial Crisis Network, which works to promote conservative judges, announced a television ad campaign to boost Kavanaugh.