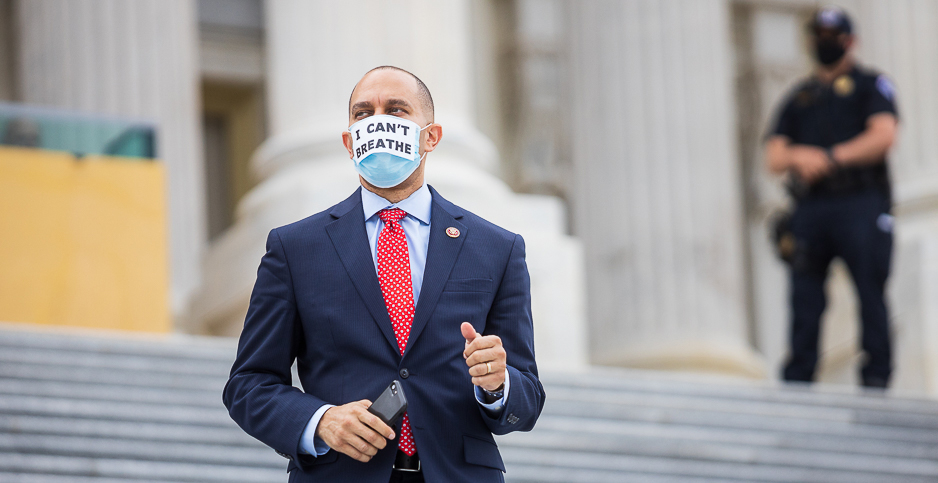 House Democratic Caucus Chairman Hakeem Jeffries (D-N.Y.) wearing a mask outside the Capitol in May with the words "I can't breathe" in reaction to the death of George Floyd. Francis Chung/E&E News

House Democrats are signaling they may revive the fight over Confederate imagery as the fiscal 2021 appropriations process kicks off, resuscitating an issue that has dogged Interior-Environment spending bills in recent years but one that may be losing its partisan potency in the current climate.

House Democratic Caucus Chairman Hakeem Jeffries (D-N.Y.) confirmed to E&E News last week that he planned to pursue an amendment that would prohibit Confederate flags at national parks — the same proposal he pushed in 2015 that took down the Interior-Environment appropriations bill that year.

Citing a wave of police killings that have sparked nationwide protests for weeks, Jeffries said he would be exploring options to ensure that his amendment is considered during markups expected to start next week in the Appropriations Committee, of which he is not a member.

"It is certainly my hope that members of Congress will express more concern for protecting the health and safety and well-being of unarmed, innocent African Americans who are killed in police encounters as oppose to preserving the legacy of Confederate soldiers," Jeffries said.

Rep. Jared Huffman (D-Calif.), whose push to remove Confederate flags from federal cemeteries contributed to the 2015 floor melee over amendments, suggested this year’s spending bills may tackle the fight over imagery head on.

"Things have really changed in our favor in these last several years," Huffman said. "And to the extent that we need to go further on removing offensive monuments and preventing gratuitous displays of the Confederate flag, you might see that in the base bill."

A preview of current congressional sentiment will be on public display this week in the Senate, when the chamber considers the fiscal 2021 National Defense Authorization Act, which may see amendment debate over a provision that would require the military to rename facilities named after Confederate officials (E&E Daily, July 29).

But former members from both parties said Confederate imagery is unlikely to be as charged an issue as past years, given shifting public sentiment on racism.

"I don’t think it’s going to be much of a fight," said former Rep. Jim Moran of Virginia, the top Democrat on the Interior and Environment Appropriations Subcommittee for several years who retired in early 2015 just before the flag flap flared.

"I don’t think Republicans are going to object to making some changes, the military is already doing so. I don’t think it will be as contentious an issue this time around given what is happening in the larger sense" around racial justice across the country, Moran added.

Just as the current debate over Confederate imagery has its roots in the May death of George Floyd at the hands of Minneapolis police, the furor that unfolded on the House floor during the Interior-Environment spending debate in July 2015 had its roots in racial violence: the June slaughter of nine Black churchgoers at the Emanuel African Methodist Episcopal Church in Charleston, S.C., by a white supremacist.

Just weeks later, in July, with the Interior-Environment bill on the House floor for consideration, Jeffries and Huffman introduced their amendments, which would have removed the Confederate flag from cemeteries on public lands and restricted the sale of the flag at National Park Service facilities. They were quietly adopted by voice vote weeks later during a late-night debate that July.

However, their inclusion sparked complaints within the House majority GOP caucus the next day. Some Republicans insisted on offering their own amendment to strip the Democratic proposals from the bill, but Democrats turned the about-face into a public relations nightmare for the GOP and party leaders. The controversy on Capitol Hill played out on the same day that South Carolina elected officials were due to take down the Confederate flag from the Statehouse grounds in direct response to the Emanuel AME shooting.

Republicans ended up deciding to pull the spending bill from the floor entirely hours before a final vote was scheduled, effectively ending the entire appropriations process for the year (Greenwire, July 9, 2015).

Still in the majority the following year, House Republicans were able to continue to sidestep the controversy by clamping down on the amendment process in the Rules Committee, but the fight began to bleed into other appropriations bills as well, including the normally noncontroversial Military Construction-Veterans Affairs measure.

The informal Senate truce on "poison pill" amendments has eased the appropriations process in recent years, but it’s still unclear whether rider fights can be avoided in the coming weeks as appropriators buckle down.

Senate spending markups continue to be delayed by disagreements between the two parties over amendments (E&E Daily, June 29).

As of late last week, many senior House Democratic appropriators said they knew of no coordinated plans to use spending bills as vehicles for legislating on Confederate imagery, but they expected the issue would come up. Several welcomed the debate.

Rep. Tim Ryan (D-Ohio), chairman of the Legislative Branch Appropriations Subcommittee, acknowledged there are a lot of issues to resolve in a narrow window. "I think now is a really critical time for us to have these kinds of discussions, while people are paying attention," he said.

Rep. Barbara Lee (D-Calif.), an Appropriations Committee member, said, "I think every appropriate committee and subcommittee that is germane, that can have relevance to us finally getting rid of these statues, should do that."

Rep. Debbie Wasserman Schultz (D-Fla.), the chairwoman of the Military Construction and Veterans Affairs Appropriations Subcommittee, told E&E News to "stay tuned" when asked if she was aware of efforts to debate Confederate imagery in appropriations bills, but she would not elaborate.

House Majority Whip Jim Clyburn (D-S.C.), the highest-ranking Black member of Congress, told E&E News he would prefer the matter be dealt with in authorizing legislation, outside the appropriations process, but acknowledged appetite among fellow Democrats for the discussion.

"I think the environment calls for us to have the debate," he said.

It’s unclear for now whether that debate will take place in committee or on the floor. Jeffries said he may ask an Appropriations Democrat to offer an amendment on his behalf unless a process is put in place for substantial amendment debate on the floor.

Moran said any conflict in the Interior-Environment Subcommittee seems especially unlikely given there are no "flamethrowers" on the GOP side.

He noted the top Republican is moderate Rep. David Joyce of Ohio, whose state was part of the Union during the Civil War and who is not likely to push for maintaining Confederate symbols.

A former Republican lawmaker, who asked not to be identified, said Democrats could simply include the provision in the spending bill text and that it’s unlikely the GOP would try to remove it.

"It would be hard for Republicans to strip that out, they wouldn’t have the votes, and who wants to be the face of the Confederacy right now?" the former House member added.

If a Confederate provision is in the House-passed bill, it could potentially be a conference issue with the Senate, where Republicans are writing the bills and may be silent on the matter.

Senate Appropriations Chairman Richard Shelby is from Alabama, a state unofficially known as the Heart of Dixie, and he has in the past said it should be up to states to resolve issues surrounding the Confederate flag and other Civil War symbols.

Sen. Lisa Murkowski (R-Alaska), chairwoman of the Senate Interior and Environment Appropriations Committee, said recently she had not thought about the issue coming up on her bill but noted that anything can happen on spending measures.

While NPS eventually independently ended sales of Confederate-themed paraphernalia that Huffman targeted in 2015, the congressman said he would consult with the Congressional Black Caucus before proceeding on Confederate imagery proposals this year.

"This is really a moment where the Congressional Black Caucus is leading and should continue to lead," Huffman said. "As passionate as I am about doing all these things, I will look to them for guidance."

Rep. G.K. Butterfield (D-N.C.), who was chairman of the Congressional Black Caucus in 2015, said he expected the tone of the debate would be different this time around, citing a shift from five years ago to the current national reckoning on race.

"Public opinion has taken a positive turn, and I think elected officials are paying attention," he said. "It will still be controversial, but it will be less controversial, and I believe that public opinion, at the end of the day, will control the outcome."

Rep. Karen Bass (D-Calif.), the current chairwoman of the Congressional Black Caucus whose ancestors helped build the U.S. Capitol as slaves, said it was a "wonderful idea" to bring the debate on Confederate imagery into the appropriations process.

"As an African American whose ancestors built this place, the idea that I have to walk through and look at the people who brutalized them, who killed them, who tortured them, and some states choose to enshrine their criminality, is beyond offensive," Bass said.

"In no place in the world would you have statues enshrined to the people who tried to destroy the country. It’s the height of hypocrisy."

She also predicted the debates around amendments like Jeffries’ would be different now.

"When I moved here, the first street I lived on was Jefferson Davis Highway. I’m like, what?" recalled Bass, who was elected to Congress in 2010. The highway was renamed Richmond Highway in 2019.