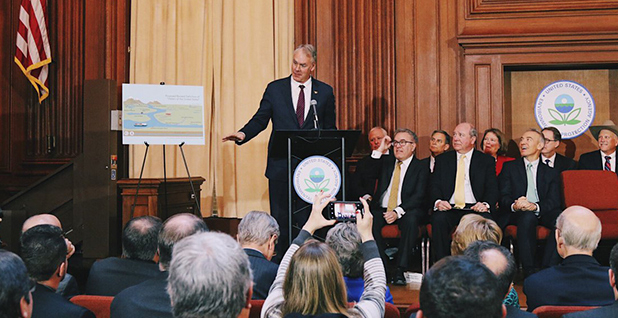 Multiple senators cited their personal relationships with Heller, as well as the fact that he hails from the West, as qualifications for the job as the nation’s top steward of public lands.

"Dean and I always have a good working relationship," said Democratic Sen. Catherine Cortez Masto of her Silver State colleague. "There’s no doubt he knows the Department of Interior, and from my perspective he also knows all the issues that are important for Nevada."

Heller’s office did not respond to a request for comment, and the senator did not vote last night. But his fellow Republican senators said they would be happy to see their colleague tapped.

Sen. John Barrasso (R-Wyo.) noted that the decision rests with the president but called Heller a "good guy," adding, "I like working with him, and he’s confirmable."

Sen. John Boozman (R-Ark.), who also served with Heller in the House, called him "a person of integrity, a bright guy. I think he’d do a great job."

Senate Energy and Natural Resources Chairwoman Lisa Murkowski (R-Alaska) — who also leads the Appropriations subcommittee that funds Interior — said she hasn’t had any conversations with the White House about filling Zinke’s position, but she signaled she’d like to see a Westerner continue as Interior secretary.

"With Secretary Zinke’s departure, I hope the department will abandon the haphazard approach it has taken to the sweeping reorganization efforts under Mr. Zinke’s leadership — because up to this point, the department has offered little in the way of specifics or meaningful consultation with Tribes, Congress, state and local governments, the conservation community, or the public at large," Udall said in a statement to E&E News.