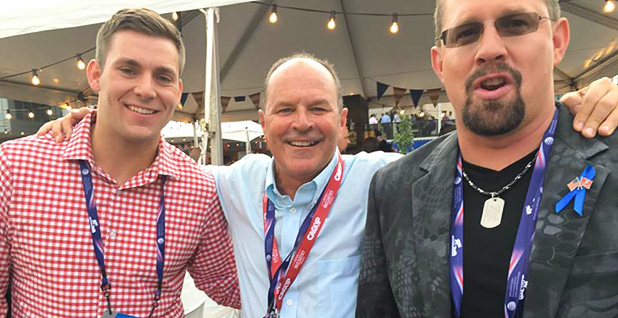 Attorney Michael Stoker (center) is credited with coining the "Lock her up" chant, referring to Hillary Clinton, at the 2016 Republican National Convention. Mike Stoker/Facebook

The lawyer expected to get a top EPA job has said climate science is based on "conflicting evidence" and called California’s efforts to work with China to combat global warming "ludicrous."

Republican Michael Stoker — a longtime California agriculture attorney and former Santa Barbara County supervisor — is in line to become the next EPA Region 9 administrator, multiple sources told E&E News. He’s not well known on the national stage, but he’s a longtime supporter of President Trump who is credited with coining the chant "Lock her up," referring to Hillary Clinton. He has a long record of advocating for industries hoping to scale back environmental rules.

And on climate, his public comments are in line with those of EPA Administrator Scott Pruitt and other top Trump administration officials, who have downplayed humans’ impact and criticized state and federal policies.

"I would totally expect the oil companies to prevail," Stoker told The San Diego Union-Tribune last July. "I really think that there’s no merit to these cases based on existing laws," he said, adding, "But nothing would surprise me about court decisions that come out of California anymore."

It’s unclear if or when a formal announcement about Stoker’s hire will be made. The Region 9 post has been without a political appointee for more than a year. Stoker recently declined to "confirm or deny" his appointment (Climatewire, April 30).

EPA has not responded to multiple requests for comment.

If he gets the job, Stoker would be at the head of an EPA office that would likely go head-to-head with California Gov. Jerry Brown (D), who announced last week that he is suing the Trump administration over fuel efficiency standards. EPA’s Region 9 office oversees California, Nevada, Arizona and Hawaii and employs about 700 staffers.

Stoker has had some harsh words for the California governor.

Stoker argued that California would suffer economically and the efforts would not produce any noticeable reduction in global temperature increase. Brown’s opposition to Trump, he warned, would be a "hard lesson" for California. Stoker added, the article states, that a better option would be for the United States to renegotiate the Paris climate accord so that China and India take on a greater role in reducing emissions.

He’s known for having entered Santa Barbara politics in the 1980s by opposing an anti-oil ballot measure, according to Linda Krop, chief counsel with the Environmental Defense Center in Santa Barbara.

When he was a Santa Barbara County supervisor from 1986 to 1994, Stoker was part of an effort to reorganize the county’s Air Pollution Control District. At the time, the agency was ramping up fines and rules for polluters.

As a county supervisor, Stoker brought a bold, outspoken personality to the dais. He was known to be a lifelong Republican, but many liberals consider him affable. Still, Santa Barbara Democrats haven’t minced words about the thought of him leading Region 9.

"It’s a weird fit for him," said Terry Dressler, former Santa Barbara County Air Pollution Control District (APCD) head. "I was in air quality for 33 years, and I wouldn’t know anything about running an agency of 700 people."

Dressler, whose APCD tenure overlapped with Stoker’s terms on the county Board of Supervisors, recalled that Stoker was part of an effort to reorganize the agency at a time when it was ramping up environmental rules. (In the 1980s, the county supervisors were the five elected officials overseeing the agency. Today, the surrounding cities have a voice on APCD’s board.)

"It broke my heart what was done to them," he said. "They were high-level regulators."

The reorganization effort was heavily backed by the oil industry that operates onshore wells in oil canyons in the northern part of the county. It was pushing back against air regulators’ attempts to levy fees on polluters.

Like many California counties, Santa Barbara was not meeting air quality standards. So Dressler said the agency first targeted big sources such as the auto and petroleum industries and then went after lesser polluters such as gas stations.

Stoker’s supporters, however, said the agency was guilty of overreach. Attorney Randy Fox, a friend of Stoker’s, called APCD "horrible in the ’80s." It went after low-level polluters such as hospitals and gas stations, he said. He called the reorganization "efficient" and added that Santa Barbara County came into air pollution compliance two years later.

Like Pruitt and others in the Trump administration, Stoker has complained of environmental regulators going too far.

In the mid-2000s, Stoker worked as a spokesman for Greka Oil & Gas Inc. while that company battled local and federal regulators over numerous oil spills that released an abundance of crude oil as well as toxic chemicals.

Seven years ago, Greka — which has changed its name to HVI Cat Canyon Inc. — was sued by the federal government for violating the Clean Water Act, the Oil Pollution Act and state environmental laws. EPA, among other federal agencies, argued that the Greka spills had tarnished "navigable waters." At the time, Stoker stated that the lawsuit was about "federal agencies that are attempting to overreach their jurisdiction."

Stoker also has a long history advising farmers. He has advocated for legislation to allow relief from the Endangered Species Act during California’s yearslong drought. "The ESA has essentially prioritized endangered species over human beings and our food," he wrote in a November 2016 op-ed in the Santa Barbara News-Press.

Stoker wrote that up to 30 percent of water in the Sacramento Delta and Northern California reservoirs was rerouted to the Pacific Ocean to protect endangered species. "This was water that prior to passage of the ESA was delivered to our farmers to grow our food, and to our communities to provide people safe drinking water," he wrote.

‘Who knows what he is going to do?’

Stoker’s supporters and detractors describe the 62-year-old as having a big personality. He ran unsuccessfully three times for state and federal office. He’s well-liked among Republicans, but Democrats who know him aren’t quick to deride him.

Rep. Salud Carbajal, a Democrat who represents Santa Barbara, has known Stoker for 25 years through their work in county government. He said they have a "good working relationship" but added that Stoker’s record of service is not in line with the mission of EPA, which he said involves working to mitigate the impacts of climate change.

A few Democratic Santa Barbara politicians — including Carbajal — had voiced support for Stoker’s previous nomination to be director of the Federal Mediation and Conciliation Service but balked at the notion that he should run the EPA office. (He was never confirmed for the labor agency post.)

For some time, Stoker has appeared to be angling for a job in the Trump administration. He was a Trump delegate at the 2016 Republican National Convention, where he was credited with starting the "Lock her up" chant about Clinton. He was rumored to have been considered for a seat on the National Labor Relations Board, but that never materialized.

"He’s a talented congenial opportunist. He was a Reagan Republican; he was a Newt Gingrich Republican; now he’s a Trump Republican," said Santa Barbara Independent editor Nick Welsh, who has covered Stoker for three decades.

Stoker’s longtime friend Dan Gira, a Democrat, recalled one occasion when Stoker as county supervisor cut a deal to protect the environment. He voted to preserve open space along the bluffs.

As for the EPA post, Gira said, "Who knows what he is going to do?"