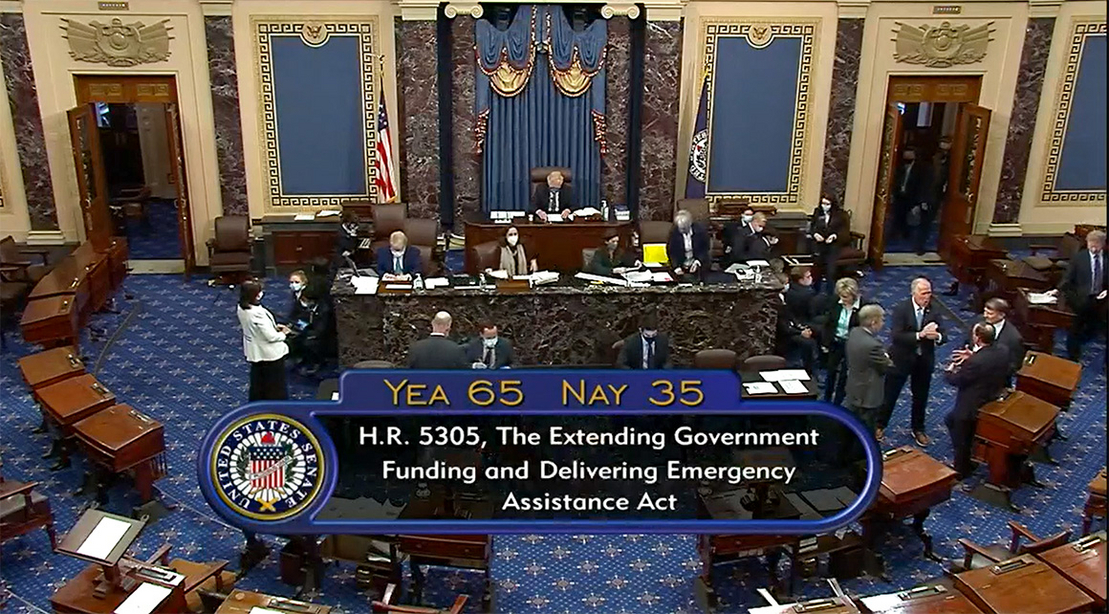 Both the Senate and House approved legislation today to prevent a government shutdown. C-SPAN

Congress has approved stopgap spending legislation that would avert a government shutdown at midnight tonight.

“On government funding, what Republicans laid out all along was a clean, continuing resolution without the poison pill of a debt limit increase," said Senate Minority Leader Mitch McConnell (R-Ky.).

Speaker Nancy Pelosi (D-Calif.) said this morning the House would soon “send [the CR] on to the president to keep government open.” She noted it would prevent hundreds of thousands of federal worker furloughs. President Biden is certain to sign the bill.

The CR does not include an extension of surface transportation programs, which are set to expire at midnight. Democrats continue to hope those programs will be covered by House passage of the Senate’s bipartisan infrastructure bill later today.

“Hopefully, at the end of the day, the House will pass the bill that we passed. … That’s the right thing to do,” said Senate Environment and Public Works Chair Tom Carper (D-Del.), noting it would reauthorize highway programs for five years. Carper said bipartisan discussions over a “Plan B” are underway if the bipartisan infrastructure bill stalls in the House.

Sen. Shelley Moore Capito (R-W.Va.), the ranking member on EPW, said lawmakers’ backup plan is a standalone bill that would provide a short-term extension of the expiring transportation programs.

She said failing to do so would block new starts for infrastructure projects and could threaten pay for workers on existing projects. Democrats likely opted to not include the issue in the CR to push for action on the broader package.

Even with the government shutdown crisis averted, lawmakers from both parties noted a bigger crisis awaits as soon as mid-October, when the country is expected to hit the current debt limit.

“Republicans need to get out of the way so Senate Democrats can address this issue quickly and without needlessly endangering the stability of our economy,” said Senate Majority Leader Chuck Schumer (D-N.Y.) yesterday.

McConnell, however, continues to insist the GOP won’t support any debt increase, instead arguing Democrats have the votes to handle it themselves in the pending $3.5 trillion reconciliation bill.

Some coastal lawmakers were also lobbying for the CR to include language to delay reforms to how the federal flood insurance program works. Those reforms would lead to significant rate increases.