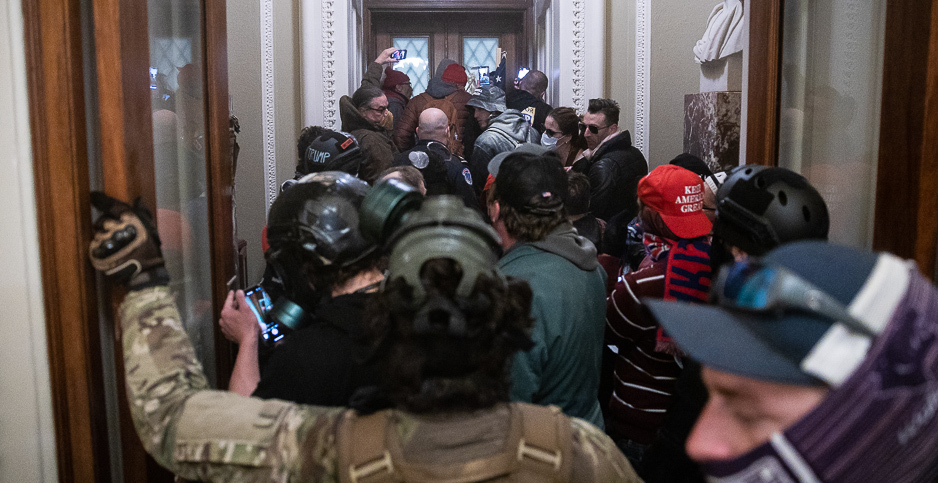 After a harrowing day of fierce and violent rioting at the Capitol by supporters of President Trump, Congress formally approved the results of the 2020 presidential election this morning, paving the way for President-elect Joe Biden to be sworn in Jan. 20.

Republicans in both the House and Senate raised objections to the certifying results in Arizona and Pennsylvania. The chambers easily dismissed the objections. Still, more than 100 House Republicans voted against certification.

The process, usually a formality noted for pomp and circumstance, was delayed for almost six hours yesterday after thousands of Trump supporters rioted inside and outside the Capitol.

Police shot and killed a woman just outside the House chamber. Three died on the Capitol grounds because of medical emergencies. More than 50 arrests were made.

Lawmakers, their aides and other workers were forced to lock down and evacuate to nearby House and Senate office buildings. It marked the worst looting and violence seen in the building since the British torched it in 1814.

"We’re going to finish exactly what we started," said Majority Leader Mitch McConnell (R-Ky.) when the chamber reconvened in the evening. "We’ll complete the process the right way. Criminal behavior will never dominate the Congress. The institution is reliant. Our democratic republic is strong."

McConnell earlier in the day said he opposed the maneuvering by some on the right and warned against Congress trying to overturn the election for political gain. In the end, Vice President Mike Pence declared Biden the winner just before 4 a.m.

Senate Minority Leader Chuck Schumer (D-N.Y.) blasted Trump for sparking the riots. "This was in good part President’s Trump’s doing, incited by his word, his lies. His everlasting shame. Today’s events certainly — certainly — would not have happened without him."

Before the riots several conservatives, including Sen. Ted Cruz (R-Texas), argued against certifying results for Arizona, the first of several states Biden won.

"For those who respect the voters, simply telling the voters, go jump in a lake, the fact that you have deep concerns is of no moment to us?" Cruz said. "That jeopardizes, I believe, the legitimacy of this and subsequent elections."

Last night after the riots, Sen. Josh Hawley (R-Mo.) joined House conservatives in objecting to electors from Pennsylvania. The Senate quickly voted down the objection while the House held more extended debate into the morning.

House members raised objections against other states like Georgia and Wisconsin but lacked Senate support. Members of both chambers have to object to certifying a state’s electors to trigger a vote.

Hard-line GOP senators stepping back from joining more objections was a nod to the long-shot odds of overturning the election and calls for unity after one of the darkest days in congressional history.

Of more than a dozen senators expected to oppose certification of at least one state, just six ended up voting to reject the Arizona electors: Ted Cruz of Texas, Hawley, Cindy Hyde-Smith of Mississippi, John Kennedy of Louisiana and freshman Sens. Roger Marshall from Kansas and Alabama’s Tommy Tuberville.

Several senators who had planned to object announced their change of heart after the riots, including Sens. James Lankford of Oklahoma and Steve Daines of Montana.

"We must, and we will, have a peaceful and orderly transition of power," the pair said in a joint statement, while vowing to press on with scrutiny of election integrity through "all legal and peaceful means."

"I cannot now in good conscience object to the certification of these electors," she said last night. "The violence, the lawlessness and siege of the halls of Congress are abhorrent and stand as a direct attack on what my objection was intended to protect."

Democrats were united against the objections. Some in the GOP forcefully broke with colleagues who questioned an election that has survived dozens of legal challenges.

"The best way we can show respect for people who were upset [by Trump’s loss] is by telling them the truth. That’s the burden. That’s the duty of leadership," said Sen. Mitt Romney (R-Utah).

Even close Trump allies look to put distance between themselves and the president, including Sen. Lindsey Graham (R-S.C.).

"Trump and I, we had a hell of a journey," he said during the Senate debate. "I hate it being this way. From my point of view, he’s been a consequential president, but today … all I can say is count me out. Enough is enough. I tried to be helpful."

Trump, for his part, did little to rein in the protesters he fired up early in the day at a rally outside the White House, even urging them to march on the Capitol.

Members of the House Judiciary Committee sent Pence a letter yesterday urging him to invoke the 25th amendment of the Constitution, which allows the vice president and a majority of the Cabinet to declare a president unfit to perform his duties.

Trump "has shown time and time again that he is unwilling to protect our Democracy and carry out the duties of the office," the Democrats wrote.

House and Senate Democrats also called for impeaching Trump again, which Sen. Ed Markey (D-Mass.) noted would prevent him for running for president in the future.

Trump this morning released a statement through aide Dan Scavino, pledging an "orderly transition." Scavino tweeted the statement after Trump’s own Twitter account was temporarily locked out.

"Even though I totally disagree with the outcome of the election, and the facts bear me out, nevertheless there will be an orderly transition on January 20th," Trump said in the statement.

"I have always said we would continue our fight to ensure that only legal votes were counted. While this represents the end of the greatest first term in presidential history, it’s only the beginning of our fight to Make America Great Again."