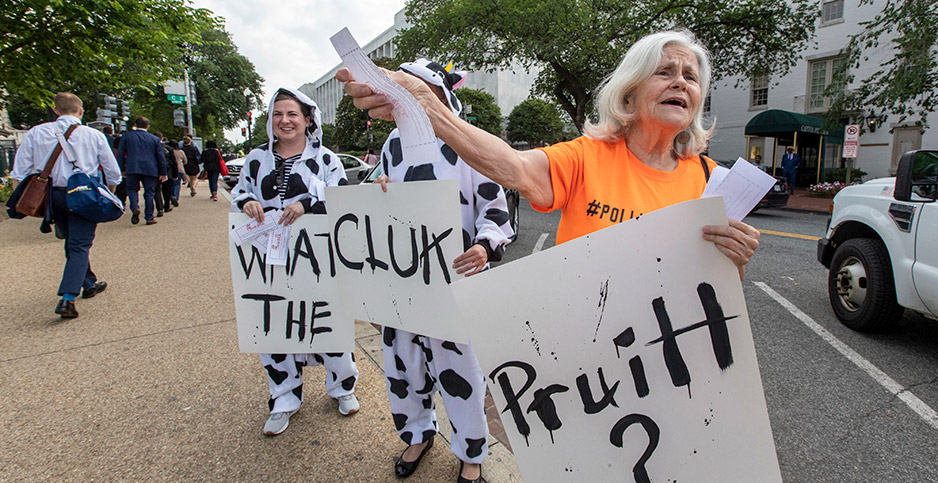 Could Congress do it for him?

Calls for Scott Pruitt’s impeachment have increased as the EPA administrator faces a mounting list of allegations of professional misconduct — from taking security guards to fetch Ritz-Carlton lotion to using government resources to inquire about a Chick-fil-A franchise for his wife.

Under the Constitution, Congress has the authority to remove Cabinet-level officials from office, "on Impeachment for, and Conviction of Treason, Bribery or other High Crimes and Misdemeanors." Such action, however, would require an extraordinary level of bipartisan agreement in a sharply divided Republican-led Congress. It would also mark a highly unusual example of public censure of an executive branch official.

"Having said that, I can’t think of a better candidate than Scott Pruitt," he said. "I’m sure there has never been a Cabinet officer subject to two or three investigations and we have, what, 13 and counting?"

Pruitt is now at the center of more than a dozen investigations, and there are calls for new ones. Six House Democrats sent a letter to the Department of Justice on Friday calling for a corruption investigation. The lawmakers said they have "grave concerns" about his use of his public office and taxpayer resources (Greenwire, June 8).

In order to impeach a civil servant, the House has to approve articles of impeachment with a majority vote. Then a committee of representatives acts as prosecutors before the Senate, which serves as judge and jury. The Senate needs to have a two-thirds majority vote in order to convict the official, who is then removed from office. In some cases, he or she is also barred from serving in future offices.

In the nation’s history, the House has only impeached one executive branch employee who wasn’t president. That was President Grant’s secretary of war, William Belknap, who was impeached on bribery charges in 1876, according to information from the Senate Historical Office.

A brief profile of Belknap on the office’s website describes Belknap as someone with a taste for finer things.

"In the rollicking era that Mark Twain dubbed the Gilded Age, Belknap was famous for his extravagant Washington parties and his elegantly attired first and second wives. Many questioned how he managed such a grand life style on his $8,000 government salary," the description read.

Belknap eventually faced impeachment after Congress discovered he had appointed someone to a trading post in exchange for quarterly payments totaling $20,000 over five years.

The secretary of war hastily resigned just before impeachment proceedings began, but the House impeached him anyway for "criminally disregarding his duty as Secretary of War and basely prostituting his high office to his lust for private gain."

The Senate then failed to get the two-thirds majority votes necessary to convict him. The Senate Historical Office notes that Belknap’s case was the last time the Senate pursued impeachment of an official who had already resigned.

Now, Pruitt’s critics are calling for him to be ousted by Congress as well. Protesters at Pruitt’s latest hearings have held up signs or worn shirts saying "Impeach Pruitt."

Basav Sen, the director of the Climate Policy Project at the Institute for Policy Studies, wrote in Fortune last month that Pruitt should be impeached for his actions to dismantle environmental regulations.

"This is the real Scott Pruitt scandal — the story of a man systematically dismantling the agency he leads to benefit the oil and gas industry (which practically owns him) and other polluters, to the detriment of the environment, Americans (especially people of color and the poor), and vulnerable people worldwide," he wrote.

While some congressional Republicans have soured on Pruitt given the steady stream of scandals, there are still many who support his policies rolling back regulations on environmental protections (E&E Daily, June 7).

Trump said Friday, "Scott Pruitt is doing a great job within the walls of the EPA. … Outside, he’s being attacked very viciously by the press." He added, "I’m not saying he’s blameless, but we’ll see what happens."

Many congressional Republicans have made similar remarks, supporting Pruitt’s work at EPA but calling the onslaught of ethics reports troubling.

Given the tepid responses of certain lawmakers to continual reports about Pruitt’s behavior, Ornstein questioned the likelihood of action from this Congress.

"My guess is [Pruitt] will be indicted before he is impeached. I’m just stunned by the lack of morality in Congress," he said.

EPA’s press office did not respond to a request for comment.