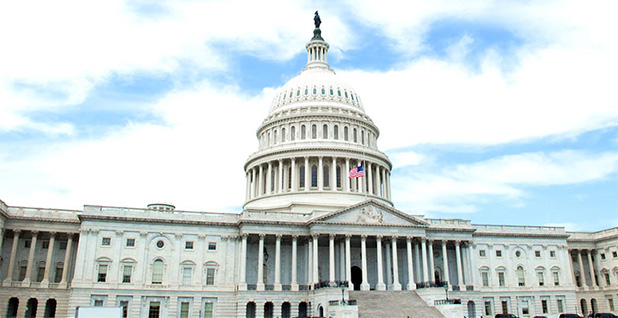 An energy bill, stopgap spending legislation and water projects and defense authorization are all on the plate of the 114th Congress as the current session winds down. Photo by Brad Clinesmith, courtesy of Flickr.

Lawmakers are set to avoid a government shutdown this week by passing stopgap spending legislation to fund agencies into the spring before adjourning the 114th Congress.

Both parties remain hopeful they can hammer out a deal to move a final water projects authorization bill this week (see related story). The Senate plans to send the president the annual defense authorization bill.

Additionally, energy policy legislation has an outside shot at moving as some members and groups continue to push for energy-related tax allowance extensions.

House Majority Leader Kevin McCarthy (R-Calif.) said on the floor Friday that he expects the House to complete both the spending continuing resolution and the Water Resources Development Act by Thursday.

"No one can predict what will happen on the floor, whether we have to be here longer," he added.

Congress must pass new stopgap spending legislation by the end of this Friday or most federal agencies will be forced to shut down.

While both parties do not want a shutdown, the House and Senate have yet to agree on how long the CR should run. The House wants to extend funding until March 31 and then finalize fiscal 2017 spending with the new Trump administration.

The Senate, on the other hand, has said it wants a CR into May or longer because it will be busy early in the year dealing with a slew of nominees.

Congress has been forced to pass the stopgaps because it only passed one of its 12 annual appropriations bills for fiscal 2017. McCarthy said he expected the March date to change but did not specify how much longer the CR might run.

Some Senate Republicans have even suggested moving one that would last the entire fiscal year through Sept. 30, 2017, to free the new Congress about leftover spending.

House Minority Leader Nancy Pelosi (D-Calif.) said that "supposedly" a CR would surface today, but GOP leaders have only said it would be out sometime this week.

Senior appropriator Rep. Rodney Frelinghuysen (R-N.J.) said members were expected to have a few days to review it before voting.

Aside from the end date, questions remain over the CR’s overall spending level and what add-on funding or riders could be included.

Some lawmakers want the CR to set spending for the coming months based on an overall level of $1.070 trillion for fiscal 2017, the cap set by the 2015 budget deal.

The current CR keeps funding at the fiscal 2016 level, which came in at around $1.067 trillion. There is worry that sticking to that lower level would handcuff agencies.

The White House is asking for an additional $11.6 billion in emergency spending for ongoing conflicts around the globe, counterterrorism operations and refugee resettlement. Republicans have signaled some willingness to provide at least some of the money.

An accord on WRDA would likely call for $170 million for Flint, but the bill may only authorize those funds and then leave it for the CR to appropriate the dollars.

A handful of tax extenders could also move in the CR, but leaders last week downplayed expectations that many, if any, would hitch a ride there.

Tax allowances in play include the Section 48 investment tax credit, which covers many technologies, like fuel cells and combined heat and power.

Also under discussion is an extension of the advanced nuclear production tax credit and a proposed expanded carbon capture and sequestration tax credit.

Negotiations continued over the weekend on an energy reform package with a deal likely needed by today to move before Congress wraps up (see related story).

If there is not agreement on a broad bill, negotiators could opt for moving with a smaller version of bipartisan provisions, including attaching some to the CR.

The Senate is expected to take up and clear the $619 billion defense authorization bill this week. The legislation passed the House 375-34 on Friday following a conference committee that removed controversial environmental riders.