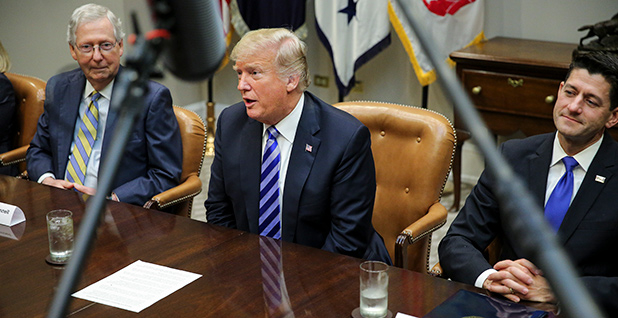 Congress returns this week in a race against the clock to get fiscal 2019 spending completed before the new fiscal year begins on Oct. 1 as a potential government shutdown looms.

Lawmakers from both parties insist they will find a way to make sure agencies stay open next month. But threats from President Trump that he might force a closure unless he gets border wall funding and the presence of controversial riders make the outcome uncertain.

Further complicating the efforts is Hurricane Florence, which could force Congress to cancel votes this week. For now, both chambers are planning to meet.

Here are three possible scenarios for how the spending fights will play out in the coming weeks that will have impacts on energy and environmental spending and policies.

Congressional leaders’ goal is to move nine of the 12 annual spending bills by the end of the month in bundled packages, known as minibuses. They’d include those covering the Interior and Energy departments and EPA funding.

This week, House and Senate negotiators announced a deal on their first minibus, a $147.5 billion package that contains the fiscal 2019 Energy-Water, Military Construction-Veterans Affairs and Legislative Branch spending bills.

"I strongly urge my colleagues in the Senate to support final passage this week so we can get this bill to the president’s desk and move to the next minibuses in the queue," said Senate Appropriations Chairman Richard Shelby (R-Ala.).

"If we continue to work together in a bipartisan manner we can successfully fund nearly 90 percent of the federal government on time — something Congress has not been able to do in many years," he said.

The House could take up the bill as soon today, with the Senate then expected to act.

Congressional leaders see minibuses as the best way to move bills quickly with limited floor time before the end of the fiscal year.

They also believe combining multiple measures will build bipartisan support and lead to fewer partisan policy riders that have derailed individual spending bills in the past.

One package would combine the Interior-EPA bill with funding measures for Agriculture, Transportation-Housing and Urban Development, and Financial Services.

The other would marry up the annual Defense bill with the largest domestic measure, Labor, Health and Human Services, and Education.

In recent years, Interior-EPA has been bogged down by policy riders, but congressional leaders are betting they can pass the bill this year by dropping those provisions if the bill is combined with three other more bipartisan measures.

Similarly, they believe Labor-HHS, long the toughest measure to pass, might move by being tied to the popular Pentagon funding plan.

Under the minibus scenario, Congress would defer three spending bills, the Commerce-Justice-Science, State-Foreign Operations and Homeland Security measures, until after the midterm elections.

All three are controversial in part because they touch on issues related to immigration and the border wall.

Leaders believe if they can move the other nine bills they’ll have little problem getting support for extending current funding for those left out until a post-election, lame-duck session.

If Congress cannot move minibuses, lawmakers will once again rely on stopgap funding to avert a government shutdown.

Under that scenario, any agencies left without fresh fiscal 2019 dollars would be funded at least through the elections at current levels.

The legislative vehicle, a so-called continuing resolution, could also carry extensions of other programs expiring Oct. 1, including the Land and Water Conservation Fund and various agriculture programs.

Lawmakers, running the political spectrum from Minority Leader Nancy Pelosi (D-Calif.) to Freedom Caucus Leader Mark Meadows (R-N.C.), have said they do not want a shutdown. Both parties say it would create great unpredictability ahead of what already is a volatile election.

Congressional aides say the first minibus, containing Energy-Water spending, is certain to move this week, but they say the others are not guaranteed. Conservatives could hold up the Interior-EPA measure if they don’t get riders forcing some regulatory rollbacks, those aides have suggested.

A major question is how long any CR would run. GOP leaders would like to wrap it up this year, but conservatives favor tying it to a fight over border wall spending after the elections or next year, and Democrats increasingly prefer extending it to the next Congress when they believe they will control the House.

Rep. Tom Cole (R-Okla.), a senior appropriator, warned against going beyond this year, noting the chance the House may flip. He recalled in 2016 when lawmakers punted spending decisions to the next Congress and, ultimately, waited months for a brokered deal that increased spending.

Tempestuous Trump has frustrated Republicans by musing about a shutdown — even as they have repeatedly warned him of its consequences.

"In the runup to the midterms, particularly in some of the districts we need to keep the House, shutting down the government is not a good strategy," said Sen. John Thune (R-S.D.), the No. 3 GOP senator, who was one of several lawmakers who went to the White House last week to press Trump on signing spending bills.

Trump caught lawmakers off guard by saying at the meeting of a shutdown, "If it happens, it happens." He has repeatedly suggested he might close the government if Congress does not guarantee billions of dollars in funding for building a border wall with Mexico.

Trump, though, at various times has also suggested he might be open to leaving that fight for the lame-duck session.

Lawmakers in both parties say their best bet to avoid a shutdown would be to pass as many minibuses as possible. They believe if Congress can fund nearly 90 percent of government by Sept. 30, Trump would be hard pressed to reject those plans and deny an extension of funding to the remaining agencies.