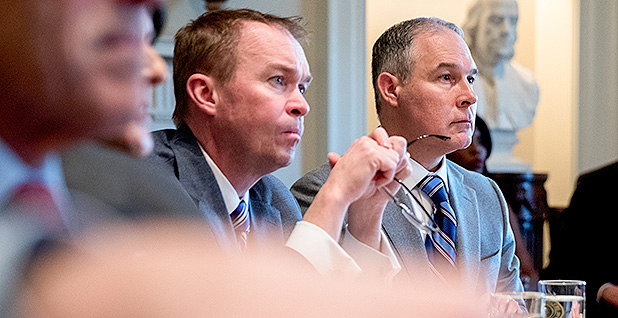 Lawmakers are expressing frustration with a White House move to severely restrict agencies from sharing budget information with Congress, including details of proposed environmental and energy spending cuts.

Office of Management and Budget Director Mick Mulvaney sent a letter late last week to department and agency leaders saying any public comments on fiscal 2018 spending should be "limited" to what was said in a broad, 53-page budget outline released last week.

Additionally, he said the administration would prefer that only department or agency heads appear before Congress to testify on the spending plan.

"It is critically important that you not make commitments about specific programs if they are not expressly mentioned in the Budget Blueprint. Similarly, you should not address account-level details. Comments on such specifics need to wait until the release of the full budget," Mulvaney said in the letter.

The Trump administration released a "skinny budget" last week that offered topline spending proposals and two-page summaries per agency. The White House said it would release more details in May.

As a result, lawmakers are waiting to hear how the administration plans to eliminate more than 3,000 jobs at U.S. EPA, cut the Interior by 11 percent and slash the Department of Energy by more than 5 percent.

Mulvaney, a former congressman, is due to meet with the House GOP caucus today on budget matters, and the restrictions seem likely to come up.

Rep. Hal Rogers (R-Ky.), chairman of the State, Foreign Operations and Related Programs Appropriations Subcommittee, said "of course" when asked whether the delay would hurt the prospects for getting spending bills in place by the time the new fiscal year begins Oct. 1.

"We depend on those agencies to tell us and justify the budget requests, but since the budget apparently won’t be here for a while, it does severely limit our options," said Rogers, who used to lead the full panel.

Other Republicans offered similar sentiments, saying the administration should provide at least some additional details before May.

GOP appropriators, however, also blame Democrats for delaying Senate efforts to approve administration nominees who have a role in crafting a budget. They say, in some cases, agencies simply lack the personnel to write detailed spending plans.

Rep. Ken Calvert (R-Calif.), chairman of the House Interior and the Environment Appropriations Subcommittee, said it’s "pretty skinny" at the top of many government offices without nominees in place. President Trump has also failed to make picks to fill many open posts.

Calvert said his panel would still hold budget hearings with outside witnesses but probably wouldn’t bother calling agency officials until the full budget comes out.

Democrats blasted the White House for limiting what spending details it will provide Congress, saying the GOP is afraid to defend sharp reductions in domestic spending.

"My speculation is they canceled [on hearings because] they do not want to have their budget subject to the light of day," said House Minority Whip Steny Hoyer (D-Md.), who predicted Republicans would likely use hearings to "trash" many of the White House cuts.

Sen. Lisa Murkowski (R-Alaska), who chairs the Interior and Environment Appropriations Subcommittee as well as the Energy and Natural Resources Committee, said she was unaware of the administration’s reluctance to have witnesses testify on the budget.

Given the lack of detail in the outline released last week, "I can see where they would be coming from and saying, ‘Until it really gets fleshed out, we’re not going to talk just about the top number,’" she said.

Even appropriators haven’t received any additional details from the administration about the request, and Murkowski said she had not spoken to EPA Administrator Scott Pruitt since his confirmation last month.

On ARPA-E, "I’ve said this is the way [to] not only lead on clean energy technologies, but in so many other spaces, and ARPA-E can help facilitate that," she said.

On the loan guarantee program, "I’ve said that I don’t think we should eliminate them — I think that we should reform the program," she added.

Echoing other lawmakers, Murkowski said the president’s budget is but the start of the fiscal 2018 appropriations process.

"I recognize that when a president’s budget request gets laid down, it’s the president saying, ‘Hey this is where I’m coming from, these are our priorities,’" she said. "Well, we will say how we feel the legislative priorities should balance against the president’s."

"These are things that are making businesses competitive by making continuing advancements in energy efficiency," she said. "Very bad idea."

Cantwell was also unaware of the administration’s hesitation to send witnesses up to testify before the full budget is submitted in May but noted that fiscal 2017 appropriations will have to be wrapped up by the end of April, when the current funding resolution expires.

"Pretty sure we’re taking some of these fiscal issues up before that," she said.

However, former House Energy and Commerce Chairman Fred Upton (R-Mich.), who chairs the panel’s Subcommittee on Energy, said yesterday that he expects Energy Secretary Rick Perry to appear before the committee next month.

"I talked to Rick Perry last week, and we’re going to have him come up next month sometime," he said in a brief interview. "Haven’t set a date."