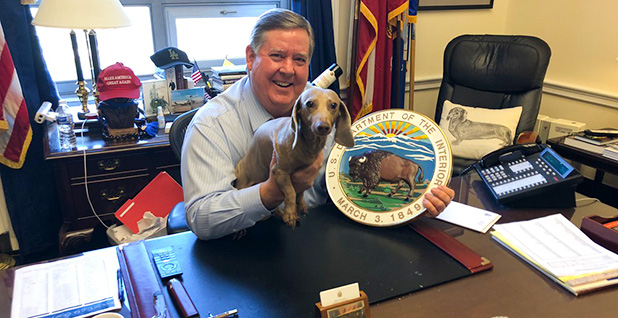 The high-ranking lawmaker who wants to block judicial review of a massive California water tunnels project calls his maneuver something close to standard operating procedure.

In the latest example of a controversial tactic, the chairman of a key House panel included language blocking judicial review of California’s WaterFix project in a fiscal 2019 Interior Department funding package. The bill would also block court scrutiny of several gray wolf decisions (Greenwire, May 15).

"We’ve done this before," Rep. Ken Calvert (R-Calif.) said in an interview.

Since 1973, more than 200 bills have become law using "no judicial review" or similar language, Earthjustice noted in a report last month. The group tracks legislation that would restrict access to the courts.

The 2015 highway law, for instance, barred judicial review of certain decisions by the Office of Management and Budget regarding permitting timetables.

In the current Congress, more than two dozen bills would eliminate judicial review.

A proposal by Rep. Bob Latta (R-Ohio), for example, would bar consumer lawsuits against manufacturers over violations of the Energy Star program.

Another measure, introduced by Sen. Rob Portman (R-Ohio), would bar judicial review of agency heads’ decisions about whether a regulation is "major" or not. Major regulations would be subject to additional requirements.

Earlier this year, Congress passed a resolution under the Congressional Review Act nullifying the Consumer Financial Protection Bureau’s ban on consumer binding arbitration. The CRA states that a court may not review any congressional or administrative "determination, finding, action, or omission" made under the law (Greenwire, May 10).

Despite the precedent, Patrice Simms, vice president of litigation at Earthjustice, said the WaterFix judicial review language and sections in many bills introduced this year by GOP lawmakers differ from most past measures.

"When Congress takes an action to direct federal decisionmaking and then in conjunction with that action strips away the opportunity for the public to scrutinize and hold the government accountable to proper decisionmaking, that is extraordinary," Simms said.

Most laws barring judicial review have targeted interim steps and not final agency actions, he noted. The 1996 Antarctic Science, Tourism and Conservation Act, for example, barred judicial review of decisions about Antarctic research made as part of joint activities with other nations.

Broader provisions like the California WaterFix rider and the language blocking review of gray wolf decisions are the "exception," Simms said.

"When the public’s ability to challenge and hold agencies accountable in those kinds of decisions is cut off, it undermines the integrity of those decisionmaking processes," said Simms.

Like many of the thousands of bills introduced each Congress, the latest batch of judicial review measures include some non-starters.

The WaterFix judicial review ban, among others, faces a tough road in the Senate, where Democratic Sen. Dianne Feinstein of California opposes it as an infringement on the state’s rights, Feinstein’s spokesman, Adam Russell, said today.

With the right kind of support, though, the legislating could get intense.

Calvert, for one, used his chairmanship of the House Interior, Environment and Related Agencies Appropriations Subcommittee to insert the one-paragraph WaterFix judicial review ban into the larger 144-page bill.

The main volume of the final environmental study of the WaterFix plan, which the House rider would put off-limits to judges, exceeded 16,000 pages when released in December 2016.

"We’ve spent years, and thousands and thousands of documents, and environmental reviews and studies," Calvert said. "It’s time to move this project forward."

A WaterFix opponent, Rep. John Garamendi (D-Calif.), countered that "the federal government has a history of deferring to state water law" and called the provision "a radical assault on environmental laws by the Congress."

A politically potent backer of the WaterFix tunnels project, the Metropolitan Water District of Southern California, maintains a well-funded Capitol Hill lobbying force but says it did not seek the judicial review ban.

"I did it without talking to Met," Calvert said of the rider, "but I suspect they’re not disappointed."