Congress looks to buy time on spending, taxes and trade 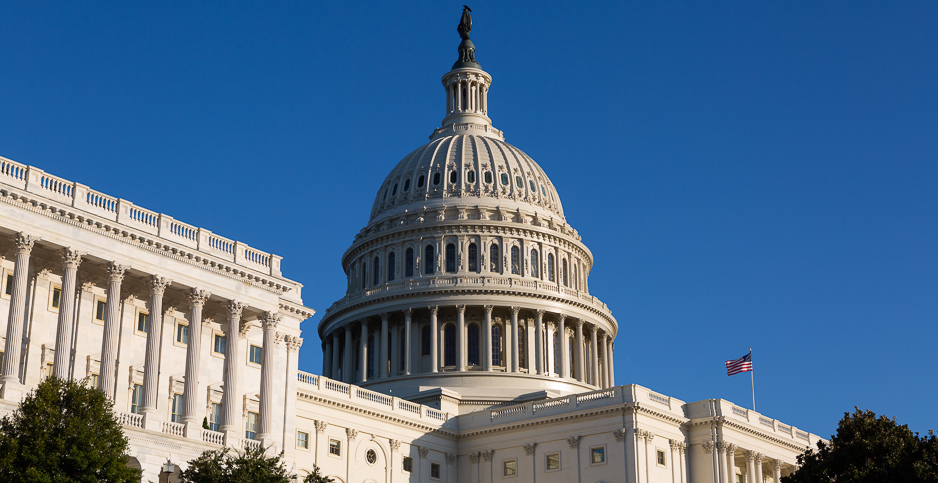 Lawmakers this week have a packed pre-Thanksgiving agenda, including approving legislation to prevent a government shutdown. Francis Chung/E&E News

Both chambers this week are expected to pass a short-term continuing resolution to prevent a government shutdown, as negotiations continue on possible year-end deals on spending, energy tax extenders and the U.S.-Mexico-Canada Agreement.

The House will go first on the CR, which would extend government funding until Dec. 20 and must be signed into law before the current stopgap expires Thursday.

That deadline falls near the end of another week of House impeachment hearings, which have infuriated President Trump and prompted speculation that he could shut the government down.

But Rep. Mike Simpson (R-Idaho), the ranking member on the Energy-Water Appropriations Subcommittee, said last week he did not think Trump would withhold his signature on the CR.

"I think it would be a bad idea for the president to not accept this. It’s just a straight CR," he told reporters Friday.

Despite the impeachment rancor, appropriators on both sides of the Capitol made headway last week toward agreeing on the spending levels for the 12 individual spending bills, known as 302(b)s because of the relevant section of the federal budget law that dictates the spending process.

Following a Thursday meeting with Treasury Secretary Steven Mnuchin in Speaker Nancy Pelosi’s office, a House Democratic aide said the two parties were close to a deal on 302(b)s, which they are aiming to finalize as soon as possible.

That would allow bicameral negotiations for all of the spending bills, but Simpson said it would be a challenge to strike deals on all of them in the three weeks that are left after members return from the Thanksgiving recess.

However, he was confident the popular Energy-Water measure could be completed on time.

"We’re still talking and good meetings with Sen. Shelby, and we hope the talks continue," she told reporters Friday.

Capitol Hill is also showing signs of life on tax and trade matters, although hurdles lie ahead for the year-end votes sought by many lawmakers.

The House Ways and Means Committee as early as tomorrow is expected to roll out a renewable energy tax package dubbed the "Green Act" that Democrats said last week would include an expansion of the electric vehicle tax credit and extensions of key wind and solar incentives scheduled to phase out under a 2015 tax law (E&E News PM, Nov. 13).

"We’re ready for a rollout of it," Ways and Means Chairman Richard Neal (D-Mass.) said Friday.

Neal has signaled the measure is intended to lay down a marker on where the House Democratic majority would like to take the energy tax code but also said that some of its provisions could be in play in ongoing negotiations with the Senate on extending a bevy of expired or soon-to-lapse energy tax breaks.

Senate Finance Chairman Chuck Grassley struck a pessimistic tone last week on extenders, noting the closure of another biodiesel plant as biofuel companies struggle with the 2017 expiration of a key incentive that is a top priority of the Iowa Republican.

"The talks are still going and the problems are still there," he told E&E News on Thursday, saying he was looking to strike a deal and attach it to whatever spending bill materializes by the Dec. 20 deadline. "It’s the only chance we got."

Neal on Friday said reviving the extenders before the new year is essential. "It has to happen," he told E&E News. "If you keep kicking it around, all of a sudden you do extenders and you’re back to where you were six months out.

Finance Committee member Ben Cardin (D-Md.) said Thursday that there’s been an uptick of discussion lately to make sure that extenders "doesn’t get lost" in the year-end shuffle.

On a separate Ways and Means issue, Neal said Friday that House Democrats plan to send U.S. Trade Representative Robert Lighthizer a proposal addressing a series of "make or break issues" that must be addressed before the U.S.-Mexico-Canada Agreement could come up in the House.

"We hope that he would digest and then respond to us fast," said Neal, who suggested the two sides were close enough to a final deal to bring the sweeping deal — a top Trump priority — to the floor for a House vote before the end of the year, as Pelosi (D-Calif.) suggested was possible last week (E&E News PM, Nov. 14).

"The differences we have are not huge, but it is enforcement," Neal said.

"We are a long way down the road, but we are not there yet," she told reporters Friday.