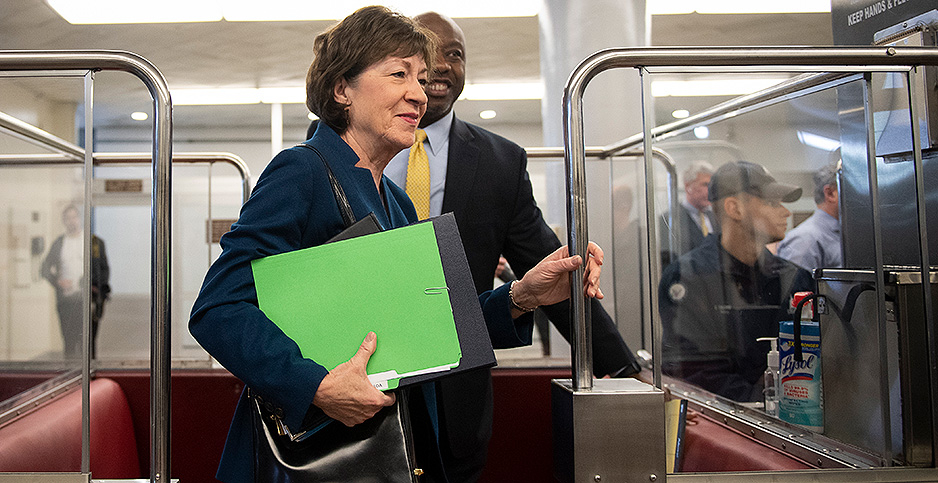 Senate negotiations are intensifying over a sweeping $1 trillion-plus coronavirus economic package that would boost agencies and provide relief to industries hit hard by the pandemic, after the chamber easily passed a bill aimed at helping displaced workers yesterday.

The Senate voted 90-8 to back a House bill that would provide aid to workers hit hard by the virus and speed up testing for the disease. President Trump then signed it into law, despite some conservative misgivings that the bill would force unfunded mandates on small businesses.

Senate Majority Leader Mitch McConnell (R-Ky.) reiterated yesterday that the chamber won’t leave until it passes a far bigger package to address the virus, raising expectations that it will be in session this weekend. He extended the time allotted for voting so members could keep their distance.

"We intend to sit down with our Democratic colleagues, see what we can agree to. And I would recommend senators stay around close. Just how long it will take to get through this stuff is unclear. But as everyone knows, we are moving rapidly because the situation demands it," McConnell said yesterday.

The bulk of the package, about $500 billion, is expected to be individual payments likely to be sent to taxpayers in April and May, based on the size of their family and income. Another $300 billion would go for small businesses, which would come via federally backed business interruption loans.

The Trump administration is openly eyeing aid for airlines and the cruise industry in the third stimulus phase, as well as $150 billion to support loan guarantees for "other critical sectors" of the economy in "severe financial distress."

The president declined to divulge which other sectors may qualify or how the money will be allocated among qualifying industries and in what quantities.

"We’re talking about all of it — haven’t detailed it yet," he said yesterday. "We have detailed that the senators and to members of the House, we have been talking about it. And we’re coming up with numbers. Haven’t gotten there yet, but certainly, hotel industry, the cruise ship industry, the airlines, those are all prime candidates, absolutely."

About $50 billion would go toward the airline industry in the form of government loans. Airlines have seen a sharp drop in revenue due to bans on overseas travel and a decline in domestic passengers.

About $45 billion would go toward bolstering federal agencies as they respond to and deal with fallout from the crisis. The bulk of the dollars would go toward cleaning up and disinfecting workspaces and covering the costs of employees’ teleworking (Greenwire, March 18).

Conspicuously absent from a White House letter detailing the forthcoming emergency spending request is any mention of Trump’s pledge to fill the Strategic Petroleum Reserve — which is hotly opposed by many Democrats and environmentalists.

"Any major economic stimulus package must provide direct financial assistance to workers and families, expand safeguards like paid sick leave, and focus on those facing the greatest economic uncertainty. Such a package should prioritize economic investments in a way that helps sustain the clean energy economy rather than bailing out fossil fuel corporations," the Sierra Club said yesterday in a statement.

Dozens of House Democrats are pushing for clean energy tax incentives to be included in the stimulus mix, but Democratic leaders are prioritizing the health and economic fallout from COVID-19 on individuals over industry relief (see related story).

"Public health infrastructure is the top priority, because if we can curb this virus, the economy will get better," Minority Leader Chuck Schumer (D-N.Y.) said yesterday. "We need to do things to help it, obviously. But if you ignore the public health crisis, with the equipment and infrastructure and personnel that is needed in many more numbers than we’ve ever seen, the economy won’t get better."

Environmental and climate provisions are notably absent from House and Senate Democratic coronavirus proposals so far, although interest in adding infrastructure to the mix would provide an opening for both issues.

While the House is on recess this week, Speaker Nancy Pelosi (D-Calif.) said in a statement that she was part of talks on the package, too.

"We should go forward with a focus on developing a cure. Science has given us reason to be hopeful, and the best minds in America are hard at work," she said.

With U.S. oil and gas producers reeling from record-low prices, sympathetic lawmakers have responded with their own proposals, including using tariffs to push back against Saudi Arabia and Russia’s price war, as well as royalty relief for producers (see related story). Business groups are also pressing for the rollback of Trump’s controversial tariffs to aid the economy.

The House calendar for next week is unclear, with votes already being canceled for Monday in the chamber. Pelosi will speak with the Democratic caucus today in a conference call, in which she is likely to offer more details on the schedule, plans for social distancing by lawmakers and teleworking for House staffers.

Two House lawmakers said yesterday that they had tested positive for the virus (see related story). Several other lawmakers have gone into self-quarantine after being in contact with infected people.

In the Senate, broad support for small businesses was on display yesterday, with senators from both parties rolling out proposals to help small firms, which are particularly challenged by the virus.

"Every day I am hearing from small businesses in my state that are on the verge of going under," Sen. Susan Collins (R-Maine) told reporters during a press conference on her own $300 billion small business relief plan.

The hospitality industry, she noted, is particularly hard hit by COVID-19. "The restaurants, the B&Bs, the gift shops, the small hotels are being adversely affected by the virus — not because their employees are afflicted with that, but because their business has totally dried up."