Congress returns to action on climate, energy and trade 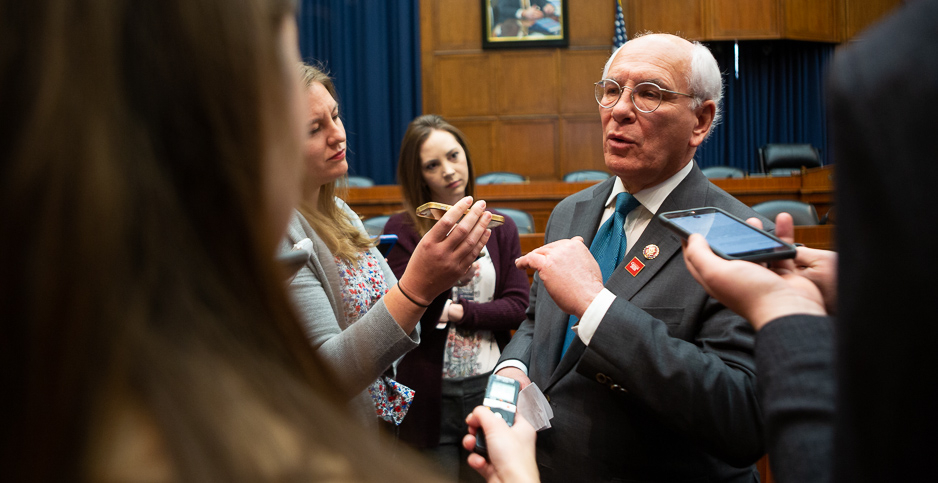 House Democrats hope to elevate climate change this month to an election-year agenda that already includes an impeachment trial and conflict with Iran, as well as transportation, taxes and trade matters.

They are starting the year, however, focusing on concerns related to PFAS chemical contamination (see related story).

In the Senate, the U.S.-Mexico-Canada Agreement (USMCA), which easily cleared the House last month, will get a vote in the Finance Committee tomorrow morning.

And with the impeachment trial delayed, the trade accord could be on the Senate floor sooner than expected (see related story).

For now the Senate is going back to processing nominees. This evening the chamber will take a procedural vote on Jovita Carranza to lead the Small Business Administration.

Climate will be all over House Democrats’ messaging agenda — if not the floor schedule — early on in 2020.

Energy and Commerce Committee leaders are planning to unveil climate legislation this month that they hope will serve as an outline for aggressive action on climate change in 2021.

The committee is expected to lay out ideas in broad strokes, with no specific reference to carbon pricing, but will aim to meet its goal of achieving economywide net-zero emissions by 2050 (E&E News PM, Dec. 19, 2019).

Chairman Frank Pallone (D-N.J.) has described it as a "discussion draft" that will be ready for release sometime this month.

"We won’t reference carbon pricing, but we will move forward during the course of this to hear from all the perspectives, all the different modeling that people embrace, and we may come up with a hybrid," Environment and Climate Change Subcommittee Chairman Paul Tonko (D-N.Y.) told reporters last month.

The Select Committee on the Climate Crisis will continue work on its own climate policy report, due out in March.

Lawmakers have said it will likely be a set of emissions reduction and environmental justice principles paired with specific policy recommendations and existing legislation.

And the Natural Resources Committee has its own legislation in hand to slash emissions and temporarily cut off new fossil fuel development on public lands (E&E News PM, Dec. 17, 2019).

Together, those efforts will be a roadmap of sorts for House Democrats, both for immediate small legislative steps and larger action in the future.

House Speaker Nancy Pelosi (D-Calif.) has said she wants to put another climate change bill on the floor before the 2020 elections.

But any major economywide emissions plan would be a political risk since it would be a tough vote for some moderates, and it would have no shot of becoming law with President Trump in the White House and Republicans in control of the Senate.

Nonetheless, leaders of the Senate Energy and Natural Resources Committee have signaled they will revive efforts to enact a comprehensive legislative package to update energy policy for the first time in more than a decade.

While it won’t address carbon pricing or regulation, the package will likely draw from the 52 energy bills that passed the committee last year that address efficiency, storage and clean energy research programs.

Lawmakers have heralded the boosts to research and development associated with many of the bills as critical to the innovation agenda to help in the fight to reduce carbon emissions.

ENR Committee ranking member Joe Manchin (D-W-Va.) said last month the timing of the push was unclear, but he called it "imperative that we get it done this Congress, before the end of 2020" (E&E Daily, Dec. 13, 2019).

The year could also be a last hurrah of sorts for Senate Energy and Natural Resources Chairwoman Lisa Murkowski (R-Alaska), who reaches her term limit to lead ENR Republicans at the end of this year.

Democrats will also get a chance to address climate change through their forthcoming highway bill, which Transportation and Infrastructure Chairman Peter DeFazio (D-Ore.) is planning to roll out early this year (E&E Daily, Dec. 20, 2019).

The measure will reauthorize the Fixing America’s Surface Transportation Act, which expires in October. It’s expected to include language on electric vehicle charging infrastructure and climate resilience, much like the bipartisan Senate version of the highway bill passed out of committee last year.

Sen. Tom Carper (D-Del.), the ranking member on the Environment and Public Works Committee, said last month he plans to refocus his colleagues’ attention in January to paying for the Senate’s $287 billion surface transportation measure, S. 2302.

That bill passed the EPW Committee last summer but still must clear several other panels — including the Finance Committee on which Carper sits.

"The idea is to get people to start thinking about that," he told E&E News, regarding pay-fors, adding that he hopes to avoid pushing off the "hardest part" of the talks until later. "I don’t think that makes sense."

Business groups and transportation advocates are also anxious to see the bill pass the Senate as quickly as possible (E&E News PM, Oct. 18, 2019).

"We think the closer we get to the election, the harder it gets to do some of this stuff, even things that are generally bipartisan like this," one transportation lobbyist said recently.

On the Senate side, negotiators will have to find about $110 billion in offsets to pay for the expected shortfall in the highway trust fund that will result from the continuing decline in federal gas tax revenues.

While there’s support by the U.S. Chamber of Commerce and other industry heavyweights for raising the gas tax, that faces steep political crosswinds, especially in the Senate.

However, highway talks could benefit from the aftermath of the expected Senate impeachment trial, when members may be looking to rally around bipartisan must-pass legislation ahead of the November elections.

"This looks more and more like something that could be that bipartisan Kumbaya moment," the lobbyist said.

Widespread disappointment over the limited scope of the tax extenders package signed into law last month all but guarantees renewed debate regarding key clean energy credits that were left out after a broader tax agreement fell apart in the final hours of negotiations.

However, the rest of the expired energy tax provisions were extended simply through the end of this year, while also retroactively added to the books for the time they were lapsed (E&E Daily, Dec. 17, 2019).

An important energy storage tax proposal fell from the talks amid a utility disagreement over its structure and an expansion of an electric vehicles tax break that is a top Democratic priority ran into personal opposition from President Trump himself (E&E Daily, Dec. 12, 2019).

Top lawmakers have already vowed to renew the push for a deal this year, a goal that might be eased by a rumored Senate Finance Committee markup on tax matters planned for after Trump’s impeachment trial (E&E Daily, Dec. 19. 2019).

One environmentalist last month said the odds for another deal were less in the new year, especially given the lack of must-pass bills.

However, the May expiration of certain health care provisions may provide an opportunity for tax writers to take another bite at the extenders apple. A second option could be a lame-duck debate after the November election.

The Senate is all but assured to take up the USMCA in the near future. The Finance Committee announced over the weekend it intends to approve the deal tomorrow morning.

The House passed the measure shortly before the holiday break despite opposition from major environmental groups, which bemoaned the lack of climate-related provisions (E&E Daily, Dec. 20, 2019).

Additionally, the trade deal would incorporate bipartisan legislation, S. 2754 — if enacted — that aims to crack down on hydrofluorocarbons, a class of superpolluting chemicals that exacerbate climate change (E&E Daily, Dec. 13, 2019).