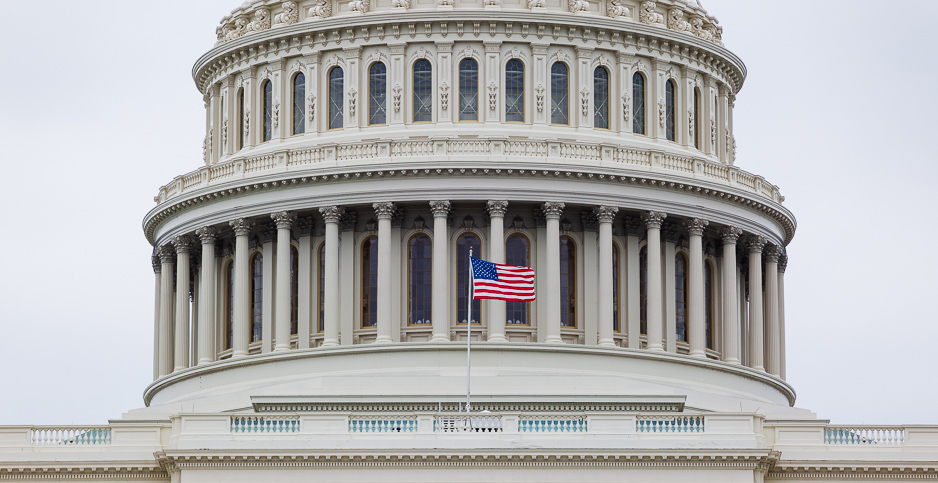 Congress is back this week with a busy fall agenda. Francis Chung/E&E News

A race to fund government will dominate Capitol Hill this month as Congress returns this week from its summer break with the new spending year looming on Oct. 1.

Here’s what’s on the agenda for the fall:

With no fiscal 2020 spending bills yet signed into law, lawmakers are scrambling to avert a government shutdown when the new fiscal year begins on Oct. 1.

Neither party favors a shutdown, so Congress is expected to move stopgap legislation by the end of the month to keep agencies level-funded until pending further negotiations.

A House aide conceded Senate Republicans have yet to sign off on the CR plan but said it seemed unlikely the upper chamber would oppose it.

The House has already passed 10 of the 12 spending bills, while the Senate has yet to introduce any of its fiscal 2020 appropriations legislation.

Lawmakers are hoping to pass at least those spending bills through both chambers before Oct. 1, leaving other agency funding, including dollars for EPA and the Interior Department, to be covered by the CR.

Several extensions of expiring programs could become part of a CR, including yet another short-term reauthorization for the National Flood Insurance Program, which is set to expire at the end of the month.

The program has been relying on short-term authorizations since 2017, and while House leaders have passed a compromise bill out of committee, H.R. 3167, there’s little indication that the Senate will do the same before the Sept. 30 deadline (E&E Daily, July 17).

Another agency facing a Sept. 30 deadline for reauthorization is the Export-Import Bank of the United States, the export financier that has faced opposition from both conservatives and environmental groups over the years.

Debate over a long-term renewal stalled this summer amid Democratic concerns about a provision in its Ex-Im Bank reauthorization bill limiting investments in Chinese companies.

The flurry of hearings focused on climate change and clean energy continues this week, including another meeting of the House Select Committee on the Climate Crisis (see related story).

House and Senate negotiators will also be looking for compromise on the National Defense Authorization Act, including provisions related to per- and polyfluoroalkyl substances, or PFAS.

Each chambers’ version includes PFAS provisions, but Senate GOP leaders and the White House have been adamant against language in the House bill, including a hazardous designation for the substances (E&E Daily, July 24).

Lawmakers will need to quickly resolve significant differences to beat the clock on a reauthorization of the nation’s pipeline safety regulators.

The authorization for the Department of Transportation’s Pipeline and Hazardous Materials Safety Administration expires at the end of September, but neither the House nor Senate have passed legislation to extend it yet. That time crunch may result in a short-term extension as the two chambers look for common ground.

The House bill, H.R. 3432, which has yet to advance out of the Energy and Commerce Committee as the two parties look for bipartisan compromise, has so far looked to introduce harsher penalties for safety violations (E&E Daily, June 25).

Lawmakers also are eyeing legislation that would direct more research and development spending for a variety of technologies seen as critical to combating carbon emissions from the power sector.

Senate Energy and Natural Resources Chairwoman Lisa Murkowski (R-Alaska) said in July that she would make a push this fall for an energy storage legislative package that would combine a variety of proposals to bolster Department of Energy funding (E&E Daily, July 10).

This week, an ENR subcommittee will hold a hearing on a roster of bills, including prominent energy efficiency legislation (see related story).

The House Science, Space and Technology Committee has readied for floor consideration a trio of bills to boost wind, solar and carbon capture spending authorizations. The committee also plans to consider a boost to the Advanced Research Projects Agency-Energy program (see related story).

A sharp rebuke of the Trump administration’s push for more offshore drilling is expected this week in the House, the chamber’s most notable environmental action since lawmakers voted in the spring to stay in the Paris climate accord. The House will vote on three anti-drilling bills (see related story).

The measures, part of a broader effort by Democrats to stifle the administration’s energy dominance agenda, would halt oil and gas exploration and development in the Arctic National Wildlife Refuge and block offshore drilling in the Atlantic, Pacific and eastern Gulf of Mexico.

While the bills are expected to pass the Democratic-led House, they are unlikely to advance in the Senate where Murkowski, a strong proponent of oil and gas exploration in ANWR’s coastal plain, leads the chamber’s Interior and Environment Appropriations Subcommittee.

On a more bipartisan natural resources front, Democrats and Republicans in both chambers are likely to push leadership this fall to take up bipartisan legislation to tackle the federal government’s multibillion-dollar maintenance backlog at national parks and on public lands (E&E Daily, July 30).

Talks will begin in earnest this month on paying for the $287 highway bill that passed the Senate Environment and Public Works Committee before the August recess (Greenwire, July 30).

Sen. Tom Carper (D-Del.), the ranking member on the EPW Committee who also sits on the Finance Committee, told E&E News before the break that he has a general agreement with EPW Chairman John Barrasso (R-Wyo.) on two principles they hope to "build out" this fall.

"One of those is that things that are worth having are worth paying for," Carper said. "Second is those who use roads, highways, bridges should help pay for them."

What that translates to in terms of actual pay-fors is unclear. Senate Finance Chairman Chuck Grassley (R-Iowa) said before the break that a hike in the gas tax — favored by many Democrats and some business interests — is "off the table" because of President Trump’s opposition. Grassley said he intends to discuss pay-fors with Senate Majority Leader Mitch McConnell (R-Ky.) this month (E&E Daily, Aug. 1).

Carper declined to completely rule out an adjustment of the gas tax, which hasn’t been raised in 25 years, noting Trump’s openness to a 25-cents-per-gallon increase in a private meeting with lawmakers last year (E&E News PM, Feb. 14, 2018).

"He still believes that, and his handlers don’t want him to be vocal out there," Carper said. "[They] don’t think that would help him with his reelection."

Carper suggested a 5-cents-per-year increase over five years, while also indicating the tax for inflation may be more politically palatable.

"That is a bridge to the future — the future is vehicle miles traveled," he said, adding that transitional phase could include "several components" beyond changes to the gas tax.

Carper declined to divulge exactly how much additional revenue is needed to address the looming shortfall in the highway trust fund. "I would say close to a gazillion dollars and leave it at that," he said last month with a laugh. "That’s rounding."

Efforts will resume this week to extend an assortment of expired and expiring energy tax incentives, although the path for a quick House-Senate negotiation is far from clear.

Grassley is eyeing whatever omnibus spending deal materializes as the vehicle to carry the extensions, which include incentives for efficiency, biofuels and alternative vehicles.

"Right now, that’s the only way of doing it," Grassley said.

House and Senate members from both parties, as well as various energy sectors, continue to push for an extenders package to also address long-sought changes to other energy tax breaks, including provisions for electric vehicles, energy storage and revisions to a scheduled phaseout of wind and solar incentives (E&E Daily, July 26).

In the Senate, those efforts will be informed by forthcoming recommendations from Finance Committee task forces examining whether extenders should be made permanent, canceled entirely or phased down (E&E Daily, May 17).

In the House, the Ways and Means Committee in June passed an extenders package, H.R. 3301, that would extend most incentives for three years, but that bill largely sidesteps the broader changes sought by many lawmakers and stakeholders.

Ways and Means Chairman Richard Neal (D-Mass.) has promised to advance a separate "green energy" package before the end of the year (E&E Daily, June 21).