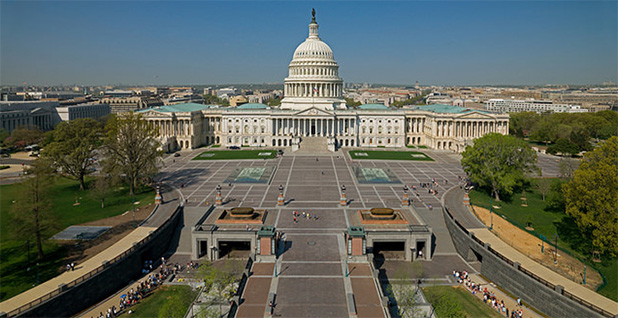 Now that a government shutdown is off the table for the next several months, lawmakers will move on to other priorities. U.S. Capitol Police

Congress returns this week without the threat of a government shutdown consuming Capitol Hill but faces renewed battles over spending, trade and nominees that will affect energy and environmental issues.

The Senate probably won’t have time this week for a highly anticipated vote on a resolution endorsing the "Green New Deal," although both parties will amp up the rhetoric ahead of a vote in the coming weeks.

Republicans want the vote to force Democrats to go on the record as backing the sweeping and somewhat controversial plan to combat global warming.

A rebuke to Trump

Congress this week will sharply push back against President Trump’s plans to use emergency powers to build a border wall between the United States and Mexico.

The House will vote tomorrow on a resolution disapproving of the president’s extraordinary move to free up billions of dollars from military accounts for the border wall after Congress provided him $1.37 billion for barriers in a recent spending deal.

"This is an historic power grab, and it will require historic unity by members of Congress, liberal and conservative, to counteract the president’s parasitic movement," Speaker Nancy Pelosi (D-Calif.) said last week.

It’s an open legal question whether Trump’s emergency powers would allow him to build the wall along five sites, including the National Butterfly Center, that Congress protected in the recent spending deal for environmental and historical reasons.

The Democratic House is certain to pass the disapproval resolution, while its fate in the GOP Senate is not certain. Four GOP senators would be needed to break ranks and join with the chamber’s Democrats to provide a majority vote.

Several Republicans, including Senate Energy and Natural Resources Chairwoman Lisa Murkowski (R-Alaska), have raised concerns about the precedent of allowing the executive branch to use funds for purposes not approved by Congress.

Other Republicans have begun to make a counterargument that Trump’s hands were tied by Congress failing to act and that he now must move to secure the border.

Trump, for his part, said he would make the resolution the first veto of his presidency and Congress would be unlikely to have the two-thirds votes needed to overcome it.

Senate Majority Leader Mitch McConnell (R-Ky.) will continue to work on what he says is his top priority this Congress — confirming Trump appointees.

The Senate will work on nominees this week, including acting EPA Administrator Andrew Wheeler (see related story) and a member of the Tennessee Valley Authority board of directors.

Also on the Senate agenda for the week is Eric Miller to sit on the 9th U.S. Circuit Court of Appeals.

But Republican frustration over the pace of nominations may boil over in the weeks ahead, and the GOP might try to rewrite Senate rules to reduce the debate time for most executive branch picks — from 30 to two hours.

The current debate limit would be retained for appellate and Supreme Court justices, as well as Cabinet officials.

Republican senators say they want to work with Democrats to change the rules, arguing that the move would benefit the next president no matter the party (E&E Daily, Feb. 14).

Democrats are reluctant, questioning the timing and citing concerns about the quality of the current president’s choices.

Republicans are threatening to make the change via the "nuclear option," which allows them to alter the chamber’s rules by a simple majority vote.

However, even within the GOP caucus, there are senators who are wary, fearing the precedent that the move — employed by both parties in the last decade — would set.

Lawmakers in both chambers will also begin staking out fiscal ground, with the White House due to release its budget proposal in the coming weeks.

The Trump administration is signaling to Capitol Hill it will release its budget request, which was delayed about six weeks because of the shutdown, in two parts over the weeks of March 11 and 18.

The first release will likely be a broad overview of spending priorities for agencies, while the second portion will likely contain the familiar line-item listings, congressional sources say.

With Democrats controlling the House, the Trump fiscal plan has no chance of being enacted this year.

But Capitol Hill and the White House will need to find common ground on two pressing issues in the coming months: the need to raise the nation’s debt ceiling by this summer and to address steep, across-the-board spending cuts due to kick in early next year under past sequestration agreements.

The coming budget rollout will offer the first sense of how the parties and the White House intend to address those looming fiscal crises.

Bipartisan discontent with Trump’s hard-line approach to trade policy continues to fester in the 116th Congress.

Lawmakers continue to await the text of the United States-Mexico-Canada Agreement (USMCA), Trump’s replacement for the North American Free Trade Agreement, which must be ratified by Congress to take effect.

Democrats on both sides of the Capitol say the labor and environmental provisions of the deal are too weak, and Senate Minority Leader Chuck Schumer (D-N.Y.) last year said revisions should also "recognize that climate change is a grave threat to our countries’ economies and the health and safety of our citizens."

Senate Finance Chairman Chuck Grassley (R-Iowa) told reporters last month he was unsure how "hard-nosed" some Democrats are on the labor and enforcement provisions, but suggested it was too late to win major changes.

"They surely can’t have in mind renegotiating," Grassley said. "If they’re reaching the point where you got to go back to the negotiating table, I would encourage the president to pull out of NAFTA and hope that they are smart enough not to let that happen."

A preview of the fight to come on trade flashed earlier this month, after Trump touted his trade prowess during his State of the Union address, during which he called on Congress to ratify USMCA and give him new powers to order retaliatory tariffs on other nations (E&E Daily, Feb. 6).

Angst over Trump’s fondness for tariffs continues to grow, as well. Lawmakers are currently awaiting a Commerce Department study on whether foreign car imports constitute a national security threat under Section 232 of the Trade Expansion Act of 1962.

That report could lead to tariffs on car imports, which would be opposed by members of both parties who have questioned Trump’s use of the authority to slap tariffs on steel and aluminum imports.

Earlier this month, a bipartisan group of senators led by Rob Portman (R-Ohio) and Doug Jones (D-Ala.) introduced legislation that would put the Defense Department in charge of justifying national security tariffs, rather than the Commerce Department.

With the government shutdown over, committees on both sides of the Capitol will dig in over the next few weeks in earnest to flesh out a legislative agenda and scrutinize the administration’s policies.

In the House, Democrats will continue to exercise the oversight powers that accompany the new majority, while Republicans will shift to a defensive posture.

For example, EPA’s top enforcement official, Susan Bodine, will appear before an Energy and Commerce Subcommittee tomorrow, where she’ll face questions about the Trump EPA’s enforcement of the law (see related story).

And Democrats’ vow to make climate change a top priority will be on full display in multiple committee hearings this week, which will highlight the Trump administration’s policies on warming while informing efforts to legislate on the ambitious "Green New Deal" (see related story).

In the GOP-led Senate, climate change will be a tangible undercurrent in committee hearings, as well, this week.

The Environment and Public Works Committee on Thursday will probe carbon capture and sequestration technology, a subject that enjoys bipartisan support and one that is already seeing heightened focus as House Democrats emphasize reducing emissions (see related story).

Several Senate panels will also hear testimony that may influence efforts to legislate on infrastructure — including tomorrow in the Senate Commerce, Science and Transportation Subcommittee on Transportation and Safety and Thursday in the Energy and Natural Resources Committee’s hearing on global energy markets.

Additionally, the Homeland Security and Governmental Affairs Committee will hold a hearing Wednesday on the security of the electric grid (see related story).