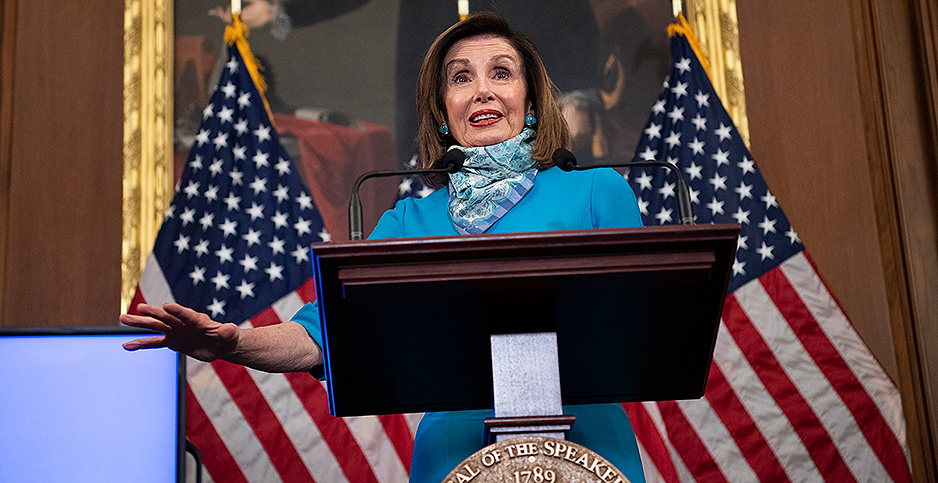 Uncertainty reigns on Capitol Hill over the scope and timing of the next pandemic aid package and whether the House will return this week to take it up.

House Democrats are continuing work on a multitrillion-dollar bill focused on federal support for state and local governments to fight and recover from the virus.

The chamber could vote in the coming days, and Democratic leaders have said members will be given 72 hours’ notice of plans to reconvene.

Like last week, the Senate will be in session, with the chamber continuing to confirm executive branch nominees.

Senate GOP leaders have signaled they want to go slow on another aid package, arguing they want to first see the impact of trillions of dollars already approved to fight the virus.

"We’ve kind of paused as far as formal negotiations go. Let’s have a look at what the latest round produces. You need a month or so to evaluate that," National Economic Council Director Larry Kudlow said after a White House meeting between President Trump and GOP lawmakers late last week, where participants stressed the need to get the economy up and running.

Republicans have not been involved in negotiations with House Democrats, who have said they will move their bill with or without GOP support.

House Speaker Nancy Pelosi (D-Calif.) told reporters last week that her caucus would craft a package that would go far beyond the previous big stimulus bill that offered $150 billion for state and local aid.

"We put a marker down that follows the lead of other bipartisan legislation that has been passed with increased funding because we have not done enough testing, with increased assistance to state and local governments because their outlays of money for the coronavirus and their loss of revenue continued to grow," Pelosi said in an interview with C-SPAN that aired over the weekend.

"We need Franklin Rooseveltian-type action, and we hope to take that in the House and Senate in a very big and bold way," Schumer said on MSNBC last week.

But Republicans are insisting that state and local relief must also limit business liability for the pandemic, even as they continued to caution against a rush to legislate more COVID-19 relief (see related story).

"Before we look at any new package, I think we should make sure we implement the $3 trillion we just passed along with the other $4 trillion that the Federal Reserve has put in — $7 trillion into the economy," House Minority Leader Kevin McCarthy (R-Calif.) told reporters Thursday. "Let’s make sure that is implemented correctly."

Senate Majority Leader Mitch McConnell (R-Ky.) has been similarly cool to a deal. "We need to carefully begin to reopen our economy. That may or may not involve another rescue package. It could well happen. But we need to be more measured in going forward and see how much growth and reinvigoration we can get out of beginning to reopen the economy," McConnell said on Fox News last week.

House Majority Leader Steny Hoyer (D-Md.) acknowledged last week that the all-Democratic bill would be ignored by Senate Republicans but said a bipartisan deal on state and local government funding and additional testing would eventually emerge.

"We think there is bipartisan, frankly, agreement," Hoyer told reporters, although he added that GOP leaders aren’t yet on board with any plan.

While infrastructure and energy-specific provisions are considered likely to continue to wait for future openings beyond current stimulus talks, interest groups and congressional allies continue to make their priorities known to Hill leaders.

The battle lines over energy in future stimulus talks are already being drawn, with Republicans introducing bills to spend $3 billion to fill the Strategic Petroleum Reserve.

Democrats and their allies, meanwhile, are mounting their own legislative counterattack to limit fossil fuel interests’ access to COVID-19 assistance (E&E Daily, May 6).

But aides and lobbyists say an eventual deal helping oil and gas and struggling clean energy incentives could emerge in later phases of stimulus talks.

House Democrats’ plans to allow limited remote voting during the pandemic are also unclear. Pelosi has not ruled out bringing back the House this week to consider a change in House rules to allow proxy voting.

Hoyer told reporters last week that he was confident proxy voting could be used during both floor and committee votes, although discussions continue.

But McCarthy told reporters last week that he has "real concerns" with proxy voting. "Could one member hold 200 proxies?" he asked. "In the Democrat version, that answer is yes. Do you have to concur with the minority? You’ve had more than 200 years of history of how Congress has worked. You would not want to make this partisan."

The two parties continue to hold talks about restoring committee action, but McCarthy was also lukewarm about remote hearings.

"Let’s bring committees back," he said. "I’ve been asking for this for more than three weeks. And only a few committees at a time so they can use bigger rooms and have social distancing just as we’re doing here."

McCarthy proposed starting with the Armed Services and Appropriations panels, given the must-pass defense authorization and spending bills.

He was open to holding remote committee hearings, but not markups, and suggested committees could rotate between holding remote hearings and later returning to the Capitol to approve legislation when large rooms become available.

"When it comes to hearings, I say let’s crawl, walk and run," McCarthy said.