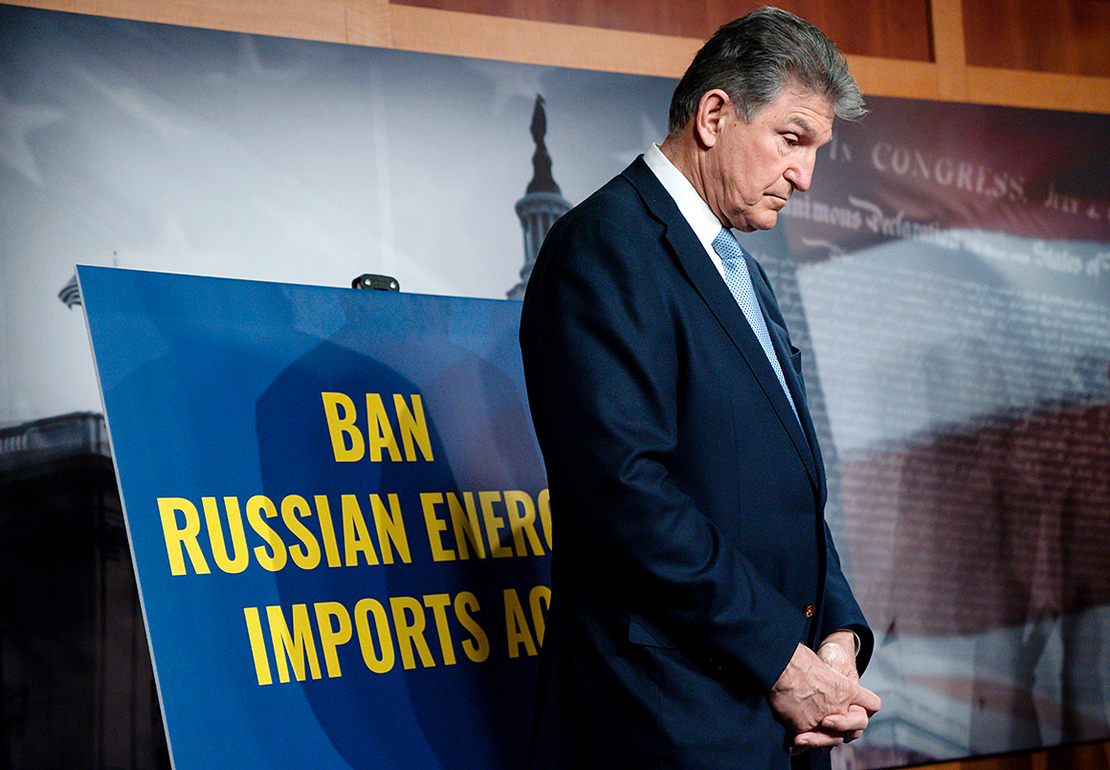 The Russian invasion of Ukraine and high gas prices are dominating the political discussion as Congress returns this week, continuing to complicate Democrats’ efforts to revive their stalled climate and social spending bill.

“Democrats didn’t cause this problem, Vladimir Putin did, and we are working to fix it,” Biden said at House Democrats’ annual retreat Friday (E&E News PM, March 11).

The price at the pump was averaging $4.33 nationally yesterday, according to AAA, while the U.S. benchmark for crude oil landed at $109 late last week after briefly touching $130 a barrel.

“Oil prices went up for a lot of reasons, but one is the fact this administration made it a priority of theirs to stifle domestic production of fossil fuels,” Sen. Rob Portman (R-Ohio) said on CNN’s “State of the Union” yesterday. “There’s no secret to that.”

The House has passed a bill to codify the ban and begin the process of additional trade penalties for Russia, and there are some senators who would like to see it pass the upper chamber, as well (E&E Daily, March 9).

That legislation initially had language to suspend permanent normal trade relations with Russia, but it was reportedly nixed in negotiations with the White House.

Biden, however, announced his support for the idea, which requires congressional approval, on Friday. House Speaker Nancy Pelosi (D-Calif.) said last week that she intends to move legislation this week ending normal trade relations with Russia.

Lawmakers could vote on a measure to suspend permanent normal trade relations — potentially with the energy import ban attached — as soon as this week.

In addition to the Republican attacks, the political atmosphere has caused some friction among Democrats, who still hope to revive the $1.7 trillion “Build Back Better Act” in some form before the midterms. Senate Energy and Natural Resources Chair Joe Manchin (D-W.Va.) opposes the package because of its potential inflationary impact, a concern that has only been amplified in recent weeks.

Some lawmakers are seeking a deal on climate and fossil fuel energy production. Last week, Sen. Bill Cassidy (R-La.), a senior member of the Energy and Natural Resources Committee, released a framework that he said could help tackle global emissions while helping meet the oil and natural gas demands of the current crisis (E&E Daily, March 10). He said his hope was to attract bipartisan buy-in.

At the Democratic retreat last week, some lawmakers expressed interest in ideas contained in the proposal.

“This is not set up to be some partisan hit piece against the administration,” Cassidy said. “This is set up to … have a consensus across the political spectrum.”

Many of the provisions pitched in the proposal follow Republican calls for quicker permit timelines to further unleash domestic production and increase exports abroad. Cassidy said the energy policies should help shore up supply chains while opening up international financing to help deliver American fuel to European allies caught in the midst of Russia’s power struggle.

Some of the ideas in the proposal would likely be anathema to many Democrats, however.

Fed picks up in the air

As the Federal Reserve is widely expected to raise interest rates this week, a slate of nominees remains in limbo.

Manchin weighed in on the fate of a climate-focused pick for the Fed, Sarah Bloom Raskin, who was tapped by Biden to be vice chair for supervision. Late last week, he told POLITICO that the Senate should move forward with several other nominees, including the renomination of Chair Jerome Powell, but not Raskin.

“If they’re willing to move four out of five? Take it and run with it. It’s a win,” he said.

Last month, Republicans in the Senate Banking, Housing and Urban Affairs Committee blocked Raskin from moving forward by boycotting a markup of her nomination. Because committees are evenly divided in the 50-50 Senate, the Republicans were able to deny a quorum to conduct business.

Chair Sherrod Brown (D-Ohio), who noted that Manchin does not sit on the committee, has said he would continue to pressure Republicans to relent but has no immediate plan to hold another vote unless GOP senators show up (E&E Daily, March 7). The committee has not scheduled any markups for this week.

Republicans have hammered Raskin’s climate views on the Senate floor and during her confirmation hearing, alleging that she would use her position at the Fed to funnel money away from the fossil fuel industry. Raskin, a former deputy Treasury secretary and Fed governor, said she would regulate with an even hand if confirmed.

The GOP has also accused her of improperly using connections to secure access to Fed payment systems for a small financial technology company she worked for and that she has refused to answer questions about it in detail. Raskin has denied impropriety.