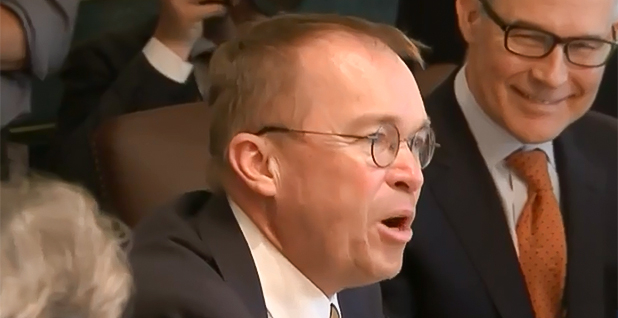 The Trump administration’s ambitious plan to reshuffle the federal government will face congressional skeptics, agnostics and maybe even some early allies this week at the plan’s first Capitol Hill cross-check.

For the administration, the House Oversight and Government Reform Committee hearing will provide a chance to start winning over some of the members whose votes they’ll eventually need. For lawmakers, the hearing will be an opportunity to dig for the many crucial hidden details (E&E Daily, June 22).

"We are sincere that the serious debate begins now," said Margaret Weichert, the Office of Management and Budget’s deputy director for management.

And though OMB Director Mick Mulvaney’s team spent many months crafting the multifaceted plan, working through an estimated 106,000 public comments, the presidential energy that can be essential in overcoming inevitable political obstacles seems to be lacking, as well.

"Would the media like to hear Mick Mulvaney’s report, or would you find it extraordinarily boring and therefore not fit for camera?" President Trump said at a Cabinet meeting last Thursday. "I don’t know."

Underscoring the president’s apparent disinterest in bureaucratic restructuring, he spoke about 4,400 words on assorted hot topics during the public portion of the Cabinet meeting but never discussed the reorganization plan.

Lawmakers, so far, have voiced a combination of alarm, support and lots of curiosity about the plan, which OMB officials deliberately kept tightly wrapped until its official presentation by Mulvaney at the Cabinet meeting (Greenwire, June 21).

"The executive branch organizational framework released by the administration … will provide valuable guidance to our committee as we continue working to create a more efficient, effective, and accountable government," Rep. Trey Gowdy (R-S.C.), chairman of the House Osversight panel, said in a statement, adding that members will "evaluate" the plan.

The plan would bulk up the Interior Department, among other changes. Interior would take over part of the Army Corps of Engineers’ civil works program, and the Fish and Wildlife Service and NOAA Fisheries would merge within Interior.

Interior officials frequently cite FWS and NOAA Fisheries overlap, such as with their joint responsibility for reviewing the impacts of a proposed dam on endangered species. While FWS might determine the dam should release extra water to benefit an inland fish species, NOAA Fisheries might want water stored to aid an anadromous (oceangoing) fish.

The administration’s plan does not specify what would become of the approximately 4,200 employees and contractors currently working for NOAA Fisheries. Speaking broadly, Weichert acknowledged that the overall reorganization "may dislocate some jobs," but did not elaborate.

The plan would also merge the Energy Department’s applied energy offices on renewables, nuclear and fossil energy into one "Office of Energy Innovation." The White House also wants to create a new "Office of Energy Resources and Economic Strategy."

"Trust in government is at historic lows because the American people and businesses think a government system designed in the middle of the 20th century hasn’t kept up with its mission, service or stewardship responsibilities in the 21st century," Weichert said.

Some shifts could theoretically happen immediately without congressional approval, OMB officials believe, with Weichert predicting that "certainly by the end of the summer" some specific moves may be made essentially at Trump’s say-so. This has happened before.

In 1970, for instance, President Nixon transferred much of Interior’s Bureau of Commercial Fisheries to the Commerce Department and renamed the office NOAA Fisheries. Nixon also established the National Oceanic and Atmospheric Administration by executive order within Commerce.

Congress has tried but never gotten around to passing a NOAA "organic act" that could establish stronger roots for the agency and its component parts.

Congress, though, could restrain White House moves through the power of the purse. Still other changes require affirmative congressional approval.

The chairman of the Senate Homeland Security and Governmental Affairs Committee, Ron Johnson (R-Wis.), pronounced himself "pleased" with the reorganization plan.

"I pledge to do everything I can to support this effort to make the government more efficient and effective for the 21st century," Johnson said.