Congress struggles to wrap up omnibus deal before weekend 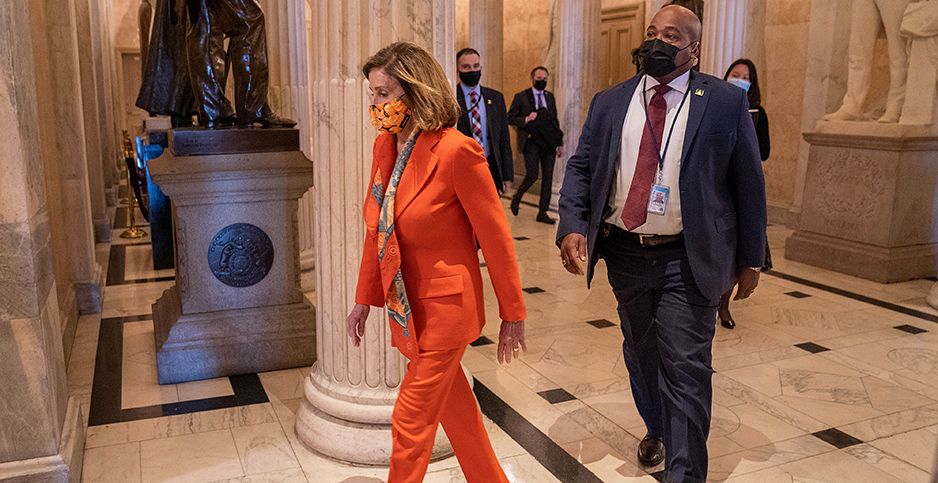 Congress is headed toward weekend work as negotiations over pandemic relief are delaying a year-end omnibus legislative package.

Senate Majority Leader Mitch McConnell (R-Ky.) said a deal was "close" as he left the Capitol last night and added the chamber would "not go anywhere" until a COVID-19 accord was reached.

He set up votes on judicial nominees over the weekend, while top congressional leaders finalize what is expected to be a more than $2 trillion package.

Even as leaders in both parties continue to maintain they’re getting close to a deal on a new phase of pandemic assistance, negotiators continue to wrangle over multiple issues.

"There’s still just a lot of kind of loose ends we’re trying to tie down," Senate Majority Whip John Thune (R-S.D.) told reporters yesterday. "And the Dems — they’ve got their list, we have our list and trying to merge the list, it’s taken longer than I think everybody had hoped."

Among the outstanding issues is a proposal by Sen. Pat Toomey (R-Pa.) that would end the Federal Reserve’s authority for emergency pandemic lending at the end of the year.

"The intent was always very clear that the facilities that were funded through the CARES Act were to be temporary," Toomey told reporters yesterday, referencing the $3.4 trillion pandemic law enacted in March that created the powers for the Fed.

He said it was a "consensus" position within the Senate GOP caucus, but Democrats have cast it as an effort to hamstring the Biden administration.

"Quite contrary to what some of my Democratic colleagues have suggested, this is not at all an effort to in any way hamstring the Biden administration or weaken our economy," Toomey told reporters yesterday. "That is a ridiculous notion."

He argued the Fed lending has served its purpose and warned of Democratic efforts to "morph" it into something else.

"There are others who would like to impose liberal conditions to loan recipients, make loan programs available as long as maybe if the borrower meets certain climate change goals or has [environmental, social and corporate governance] considerations," Toomey said.

"And certainly, there would be an allocation based on who’s politically popular and who’s not. I’m pretty sure oil and gas for instance would probably not be able to borrow on the same terms as, you know, green energy companies," he said.

Another hang-up remains a proposal to hand billions of dollars of disaster funds to the Federal Emergency Management Agency, which many Republicans are resisting because they fear it’s a roundabout way of handing funds to states and local governments — a top priority of Democrats in talks but one that was dropped this week as a compromise involving liability became intractable.

"I don’t think that people want to view that as a conduit to get state and local dollars out there," Thune said.

"And one of the things that FEMA has is flexibility in terms of their ability to respond to a disaster," Coons said. "And in lots of states, the pandemic is at disaster level, so using FEMA as one of the ways to deliver relief that allows communities the opportunity to get it strikes me as a good choice."

Also apparently unresolved yesterday was the scope of a tax extenders package that would hitch a ride on the pandemic deal.

A range of options are under consideration, but a decision rests with the top House and Senate leaders from each party.

Energy incentives that have been under discussion this week include modifications to the phaseout schedule of the renewable and investment tax credits, as well as an extension of the Section 45Q carbon capture break.

Senate Finance Chairman Chuck Grassley (R-Iowa) told reporters yesterday that it was unclear how taxes would shake out, but he signaled that something would ride on COVID-19 relief if a deal materializes.

"What will get done I can’t tell you for sure, but if we have a COVID package we’re going to have extenders," he said.

Energy, water projects and pipeline safety bills are also poised to join the omnibus, but negotiators have not said for sure.

Federal funding for agencies expires at midnight tonight, and without new funding in place, Congress will need to move a stopgap funding bill. Otherwise, a partial government shutdown that neither party has interest in would occur.

The most likely scenario seems to be that lawmakers would approve a short-term spending measure of only a few days before midnight to allow them to get to the finish line on the broader package.

However, Thune said yesterday a continuing resolution could face some opposition.

"I know people who are going to object to a CR that want to keep pressure on the process until we get a deal," said Thune.

He noted that a lapse in funding over the weekend would probably not harm agencies, as long as Congress resolves it before Monday.

House Majority Leader Steny Hoyer (D-Md.) said a decision would come this morning on whether another CR is necessary.

The 12 fiscal 2021 spending bills in the omnibus have been settled since early this week and are not seen as a sticking point in ongoing negotiations. The details, however, have not been released and won’t be until the entire package is settled.