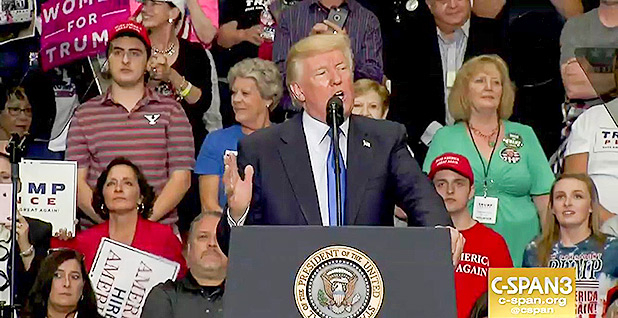 The House passed a bill that would impose new energy sanctions against Russia in a rebuff to President Trump, shown speaking yesterday in Youngstown, Ohio. C-SPAN

By a one-sided margin, the House yesterday joined the Senate in imposing new energy sanctions against Russia in retaliation for its subversion of the 2016 U.S. presidential election and its continuing aggression against Ukraine, in another twist to President Trump’s consuming Russian entanglement.

Concerted lobbying by U.S. business interests, led by the energy sector, and pressure from the United States’ European allies led to changes in the House version from an earlier Senate-passed bill. The House measure reduces the threat of sanctions against U.S. companies partnering with targeted Russian interests on energy projects around the world, analysts said.

With sanctions included on Iran and North Korea as well as Russia, the bill passed yesterday 419 to 3 and now goes back to the Senate for a final vote before arriving at Trump’s desk.

The legislation’s crosscutting terms provide another example of U.S. policy breaking from past moorings at the jarring start of the Trump presidency.

The potentially major consequences from the sanctions are still to come. "Will they deter and punish, or will they be counterproductive? Who will they fall upon? It’s a turbulent moment in terms of anything to do with Russia," said energy historian Daniel Yergin, vice chairman of IHS Markit, speaking at an Atlantic Council forum last Thursday.

The action is a clear rebuff to Trump, turning President Obama’s executive orders on sanctions into congressional mandates that Trump cannot simply sweep away, as he has with other Obama actions. Before waiving or easing sanctions against Russia, Trump would have to certify to Congress that President Vladimir Putin’s government has stopped trying to undermine Ukraine’s security and has ceased cyberattacks against the United States. Putin’s administration has denied it hacked into the Democratic National Committee email accounts.

Trump, who cozied up to Putin during the campaign, tweeted his continuing anger last weekend over the investigations of his family and aides’ involvement with the Russian sanctions issue — the "Witch Hunt," he calls it.

"It’s very sad that Republicans, even some that were carried over the line on my back, do very little to protect their President," Trump said.

White House press secretary Sarah Huckabee Sanders, speaking on ABC’s "This Week" program Sunday, said, "The original piece of legislation was poorly written, but we were able to work with the House and Senate, and the administration is happy with the ability to do that and make those changes that were necessary, and we support where the legislation is now."

But yesterday, Sanders said options remained open. "While the President supports tough sanctions on North Korea, Iran and Russia, the White House is reviewing the House legislation and awaits a final legislative package for the President’s desk."

Lawmakers from both sides said Trump has no choice but to sign, given the veto-proof votes in both chambers. "In the end, the administration will come to the conclusion that an overwhelming majority of Congress has, and that is that we need to sanction Russia for their meddling in the U.S. election," said Sen. John Thune (R-S.D.) on another Sunday news program.

Marty Durbin, executive vice president and chief strategy officer at the American Petroleum Institute, said in a statement after the House vote, "We urge the Senate to move quickly to approve the Russia sanctions legislation as amended today by the House. While there are still concerns with how the Russian sanctions legislation could affect U.S. business interests, the amended bill more effectively focuses sanctions on the intended target — Russia and its energy firms — rather than backfiring to benefit Russia at the expense of U.S. competitiveness."

The Senate version could have barred U.S. companies from participating with Russian energy companies in oil development programs around the world, industry officials said. Jack Gerard, API’s chief executive said, "according to the expanded scope of the [Senate] sanctions, the involvement of a Russian entity at any level on that project could exclude U.S. companies from partnerships and allow competitors to gain competitive advantages."

Richard Morningstar, chairman of the Atlantic Council’s Global Energy Center, cited as an example the potential threat to the financing of the Shah Deniz pipeline deliveries of gas from the Caspian Sea basin to Europe and oil to world markets — a resource that blunts Russia’s political use of its energy exports to pressure its neighbors.

"In the case of gas, it will certainly help diversify European gas supply away from a single source," he said of the Senate provisions. Lukoil, a Russian company, owns 10 percent of Shah Deniz, and that could have brought the pipeline under the Senate sanctions restrictions, he said. "The point is, even the threat of sanctions could seriously undermine the project and affect its financeability. And what a gift! Can you imagine a better gift to the Russians than to eliminate a source of competitive gas?"

The House measure narrowed the Senate restriction, applying them only to projects in which Russian interests have one-third investment or more.

On paper, that reduces the impact to a relatively few projects in situations where Russian companies have dominant control," said Kevin Book, research director at ClearView Energy Partners.

But even that higher threshold may cause problems, added Lawrence Ward, an attorney with the international law practice at Dorsey & Whitney. "The sanctions bill that passed the House, particularly its ’33 1/3′ rule, presents a possible due diligence conundrum for many U.S. and E.U. energy and mining companies working on projects in Russia of peeling back the onion to figure out precisely who their Russian partners are," he said.

"The new language does retain key aspects of executive flexibility in the Obama Russian sanctions, including the leeway given to the State and Treasury departments to determine which Russian companies would be targeted," Ward said. "Only time will tell what companies U.S. business can’t work with."

That’s another source of potential investment jitters that could affect U.S. partnerships in projects outside of Russia.

Inside the Matryoshka doll

The unilateral U.S. actions are provoking European governments, officials said. The Obama penalties were worked out closely with the European Union, targeting oil and not gas production, and "future" oil or exotic oil, including Arctic offshore, deep-sea drilling and shale prospects, not current oil production.

A spokesman for the European Union said the Senate bill "undermined the close U.S.-E.U. collaboration on sanctioning Russia, and threatened European economic interests." The measures could affect a potentially large number of European companies doing legitimate business under E.U. measures with Russian entities in the railways, financial, shipping or mining sectors, among others. The European Union will await final action in Congress before weighing in again, the spokesman said.

In Congress’ version, there is an "America First" provision written in by Congress to deter U.S. investment in Nord Stream 2, a $11.1 billion project to deliver Russian gas to Western Europe. That puts U.S. diplomacy behind the interests of U.S. producers of liquefied natural gas, whose opportunities to ship LNG to Europe could increase if Russian gas development is obstructed, Book said.

The United States has never used its energy export capabilities in combination with its political policy abroad, said Book. Until the shale revolution made the United States into a global factor in oil and gas, it didn’t have that leverage. "Now, in saying so, the U.S. is being impolitic at best. It could actually produce a backlash at worse."

Europe likes the option of buying American LNG when the price is right, but it doesn’t want to see the United States cutting off Russian competition, Book said.

In the end, the bottom line was Russia. "Politics is driving the debate rather than policy," said Jeffrey Turner, managing partner for public policy law at Squire Patton Boggs. The legislation started at a bill aimed at Iran, he said last week. "The entire bill has become all about Russia."

"At some point we have to decide [in favor of] pushing back at Russian aggression, attacking our election or continuing its aggression against Ukraine," said Daniel Fried, the former State Department’s sanctions policy coordinator who led the Obama administration’s actions against Russia.

"We should not wring our hands and worry too much about what the Russians are going to do to us," Fried said last week. "We can’t be afraid of it."