Congress wants ‘resilient’ rebuilding. What does that mean? 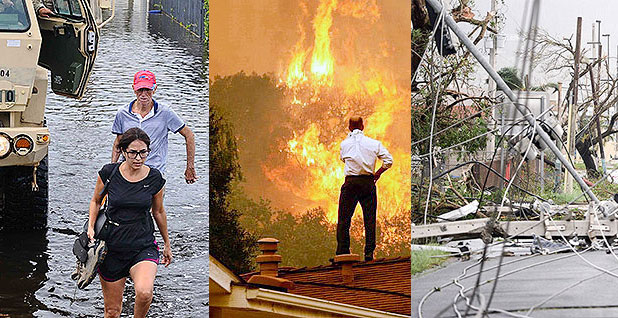 Congress is weighing a House-passed $81 billion supplemental aid package for hurricane and wildfire victims in Texas, Florida, California and the territories.

While Republicans are loathe to mention global warming, the measure includes a provision that would require post-disaster rebuilding be done with "resilience" to mitigate "future risks."

With the threat of unpredictable and more severe weather events looming, lawmakers, engineers, scientists and urban planners are wrestling with what it means to rebuild "resiliently." And they are divided.

One school of thought maintains resilience can be achieved through stronger building codes. Other advocates want an end to building in flood and fire zones altogether.

Some policymakers and analysts argue resilience necessitates combating climate change. Others, however, see global warming as beside the point.

"Clearly resilient is a term of the period. It’s warm and fuzzy and can mean just about anything you want it to mean," Spencer Rogers, a coastal construction and erosion specialist with North Carolina’s Sea Grant program, said.

"It has had other names at other times — adaptation, mitigation, storm resistant — lots of different warm and fuzzy titles over the years that are probably equally confusing," he said.

“It’s warm and fuzzy and can mean just about anything you want it to mean.”

The resilience provision in the supplemental aid package would leave the politically tricky task of defining the term to the director of the Federal Emergency Management Agency, a position currently held by longtime emergency manager Brock Long. From the bill’s passage, he would have 18 months to create a definition.

The proposed supplemental borrows language from the "Disaster Recovery Reform Act," H.R. 4460, a Republican sponsored bill that would amend the Stafford Act to require rebuilding be done with resilience. The House Transportation and Infrastructure Committee approved it last year.

The Robert T. Stafford Disaster Relief and Emergency Assistance Act of 1988, an amended version of a 1974 disaster law, governs the process through which the president makes a disaster declaration, triggering financial and physical assistance from FEMA.

The act says damaged infrastructure must be rebuilt to pre-disaster standards, a requirement that has historically hamstrung efforts to invest in stronger infrastructure. Backers of H.R. 4460 are aiming to correct that.

Sen. Lisa Murkowski (R-Alaska) said she met with White House Office of Management and Budget Director Mick Mulvaney to discuss the Stafford Act in the wake of Hurricane Maria, which bulldozed through the Caribbean last year, wiping out critical infrastructure.

"I think it was important that … Director Mulvaney was part of that [conversation] in recognizing that in order for the Stafford Act to work in a way that is going to help for future events — which we know are going to come, it’s just a question of where and when — that having a better understanding of resilience is important," Murkowski told E&E News.

Murkowski, head of the Senate Energy and Natural Resources Committee, expressed reservations about whether FEMA should be tasked with defining "resilience."

"Now, having FEMA make that determination, that’s kind of in a different category," she said. "If you’re asking whether I think FEMA should be the one, I don’t know."

While the prospect of slapping a one-size-fits-all definition on resilience presents a potential existential crisis, there are a number of Obama-era hazard mitigation policies that have proved effective in reducing risk.

The latest estimate from the National Institute of Building Sciences found that for every $1 of federal investment in mitigation, the country saves $6 in future costs. That estimate is $2 higher than NIBS’s widely cited 2005 calculation of $1 to $4.

In his first budget request, President Trump sought to dismantle programs the NIBS found to be the most effective. The budget would cut FEMA’s pre-disaster mitigation grant program in half and eliminate both the Community Development Block Grant Program and Economic Development Administration.

Trump also rescinded a 2015 Obama administration directive requiring agencies to withhold funding for projects that fail to address the risks of building in a floodplain.

Still, lawmakers on both sides of the aisle agree that investment in stronger hazard mitigation is critical. Sen. Ted Cruz (R-Texas) said the government should invest in a "smart way."

"We shouldn’t simply rebuild in a way that leaves communities vulnerable to yet another disaster," the deeply conservative senator told E&E News.

"We need to be looking to spending federal dollars in a way that is prudent, that is focused on mitigating the risk of future disasters," Cruz said, "rather than just pouring money down a hole only to be repeated later in another disaster."

Cruz said the relief bill should pass with "bipartisan cooperation," which certainly precludes any deep consideration of global warming.

For Sen. Sheldon Whitehouse (D-R.I.), that is a mistake. He says the most important factor to take into account when rebuilding with resilience is global warming, even if his Republican colleagues refuse to acknowledge the risk, he said.

"I think once you get away from the political stratum, the Trump officials, there are a lot of good career folks in the military and the civil service who understand that we have to get this right for the American people," he told E&E News.

‘Science has not been done’

But factoring in climate risks is harder than it seems. The problem is the majority of building standards that communities use are backward facing, said Ryan Colker, NIBS vice president.

"They take into account events that have already happened," he said.

For engineers to create standards that can withstand warming-fueled hurricanes, fires and floods, they must first be able to estimate the magnitude of those events, says Richard Wright, a member of the American Society of Civil Engineers who focuses on climate change issues.

"The science has not been done," said Wright.

"Now with the loss of comfort in saying the past will define the future," he said, "it requires whole new work to understand how the effects of climate change will be reflected in climate and weather extremes."

Wright and his team are engaging the climate science community in an effort to produce that data. In 2011, they organized a committee on adaptation to begin to tackle the question.

In 2015, the panel released a report that urged adaptive risk management be implemented in building standards to account for the uncertain effect greenhouse gas emissions might have on the world’s temperatures.

The committee plans to release a best practice manual this year. The working title, Wright said, is "Climate Resilience of Infrastructure: A Manual of Practice on Adaptive Design and Risk Management."

Char Miller, who teaches in the environmental analysis program at Pomona College in Claremont, Calif., said rebuilding with resilience may actually be a contradiction in terms.

"If we go back in and build the same homes we had in a fire zone, that’s not rebuilding with resilience," he told E&E News. "If you’ve been burned out, isn’t nature sending you a message that maybe this is not the place to be?"

"The pattern will keep repeating itself as this region, already suffering from a fire-fueling seven-year drought, becomes hotter and more arid in response to a changing climate," Miller wrote in an op-ed in the Los Angeles Times.

Miller advocates for innovative approaches to stop rebuilding in fire and flood zones. For example, in the late 1990s, residents of Monrovia, Calif., knew development was threatening to overrun its foothills.

They lobbied, and eventually the city spent $24 million to pay off bonds and parcel taxes for 1,416 acres it then designated as wilderness and recreation space.

"The problem with my argument is that it runs smack into developmental interests and county board of planning and zoning … for whom redevelopment is a stand-in for economic growth," said Miller, "and that’s the default."

He said, "So to say maybe we ought to be thinking about not putting people back there raises hackles … but it does seem to me that that’s the big question."

Rogers, the coastal construction and erosion specialist, said withdrawing from flood prone areas is not an option for some communities.

"The water levels are high enough and so extensive that North Carolina has at least one county that’s 95 percent in a floodplain," he said. "Only build in 5 percent of your community? Not likely."

While Rogers does consider the term "resilience" to be "warm and fuzzy," he said for him it’s really about not getting wet.

"Flooding is complicated to predict, so the design effort is mostly put into figuring out how high the water will get," he said. "Once you got those numbers, the design requirement is super simple — don’t get wet and don’t ever get hit by a wave."

Some communities in North Carolina are choosing to elevate their homes 1 to 3 feet. The practice of freeboarding is not required by FEMA, though Rogers said it is encouraged by national standards and building codes.

When it comes to climate change, Rogers said it’s not a top priority. The "zealot driven" people on both the right and the left are so focused on climate, they miss everything else, he said.

"So if you’re trying to make a case for an owner or builder to build safer along the coast," he wonders what’s more compelling. "Something that’s 30 years away or something that’s immediate?"

"So while I’m a believer in climate change predictions and sea-level rise acceleration, I don’t perceive it as our primary problem," he said. "Last year’s hurricane that hit is always the best evidence of why we need to do better."

For Robert Freudenberg, climate change and flooding are inseparable. Freudenberg is the vice president of the Regional Plan Association’s energy and environment program, where he oversees climate resilience in the New York-New Jersey-Connecticut area.

"Resilience to me is at least that," Freudenberg said. "The most important thing we do is just try to get municipalities to consider sea-level rise as an impact because we find that a lot of people are thinking about storms and storm flooding.

"But the permanent flooding that will come from sea-level rise is really something communities should begin to grapple with today," he said.

Coastal suburban communities along the waterfront should plan for 6 feet of sea-level rise, he said. "We know 6 feet is coming we just don’t know when," Freudenberg said.

Withstanding fire, sea-level rise and flooding means nothing if human resilience is not factored in, said Missy Stults, a sustainability and resilience specialist who was slated to work in a Hillary Clinton White House before the election.

"Resilience is about that infrastructure, but it has to be about the people," she said.

Stults said strong infrastructure alone is not enough. How people interact and engage with that infrastructure is what will make or break resilience.

For example, the Office of Sustainability in Baltimore launched a pilot program to create a series of "resilience hubs." Each hub consists of a building or set of buildings that can provide shelter, backup generators, cellphone chargers, tree cutters, food, water and other amenities in case of an emergency.

"Really basic stuff that you or I may have in our garage, but others don’t," she said.

If systemic poverty is the status quo and if resilience is to bounce back, "why in the world would you ever want to bounce back to poverty? When I think about cities, it has to be about bouncing forward," Stults said.

When FEMA defines "resilience," Shults said, that’s where the "rubber will hit the road."