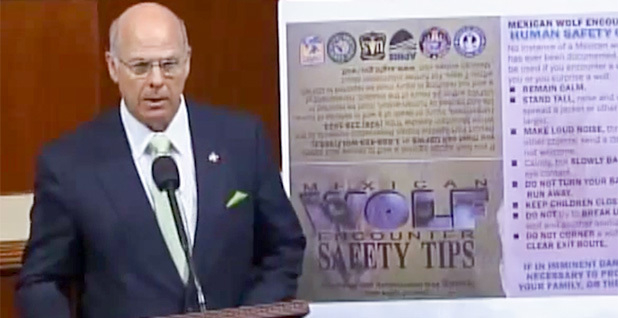 Rep. Steve Pearce (R-N.M.) and FWS Regional Director Benjamin Tuggle seem to disagree about the reason for the Mexican wolf tip cards that Pearce highlighted on the House floor. Image courtesy of Steve Pearce via YouTube.

The Interior Department’s inspector general released a report this week highlighting problems with the Mexican wolf recovery effort tied to a former interagency coordinator whom volunteers called "overly passionate," but the audit also raised questions about the honesty of the congressman who requested the probe.

New Mexico Rep. Steve Pearce (R) had asked the IG in February 2014 to investigate complaints about the program from the Catron County, N.M., Board of Commissioners.

One of the board’s main objections was the Fish and Wildlife Service program’s alleged failure to communicate with Catron County residents about safety concerns. FWS fits the wolves with radio collars and regularly monitors their whereabouts, but commissioners maintain that locals should know more about the predators’ movements so they can protect livestock, pets and children.

Even though no Mexican wolf attacks on people have been documented, the report says, FWS Regional Director Benjamin Tuggle said the program worked with Pearce’s office to print cards with instructions on how to contact the agency "if residents saw a wolf or had related concerns."

But two weeks after the cards were printed, Tuggle said, Pearce "was on the floor of the House of Representatives stating that FWS had printed the cards because it knew that wolves endangered the public," the report says.

Pearce issued a statement slamming the program after the report was released Monday.

"Right now, people feel like they cannot trust the federal government and this IG report substantiates that feeling," Pearce said. "It is clear from the IG report that the local community in Catron County feels lied to and does not trust the FWS to properly manage the wolf program."

Pearce’s office didn’t offer an on-the-record response to Greenwire about his differing interpretation of the cards’ purpose, but it provided a video clip of the June 2007 floor speech Tuggle referenced.

In arguing for an amendment that would have stopped the program, Pearce showed a chart with both a picture of an 8-year-old girl riding a horse and a photo taken two weeks later of the horse’s carcass, which was allegedly stripped of all flesh and organs by Mexican wolves.

"Because of the proximity of wolves to the population of New Mexico, this year the Fish and Wildlife Service took the extraordinary step of publishing a wolf tip card," he said, pointing to a chart of the card, which says at the top, "HUMAN SAFETY COMES FIRST!"

"Now, if the Fish and Wildlife Service put out a card and distributed it in your district telling you to be careful and what to do when you come up to one of these threats, you would feel like it should not be happening in your district," he said to his fellow lawmakers.

The Catron County commissioners had also accused the former program coordinator, who was not named in the report, of failing to properly document nuisance complaints about wolves and mismanaging livestock depredation investigations. The IG substantiated those allegations and noted that the former coordinator and a volunteer were allegedly "seen crying when one of the wolves in the program had to be killed."

But the report also says, "FWS had been aware of these issues and had already reassigned her to another position by the time we received the complaint."

The IG found that ranchers have not always consistently received full compensation for their livestock losses. At the same time, though, a ranch hand interviewed for the report acknowledged that "bears and coyotes primarily cause calf depredations on his family’s ranch and that wolves are responsible for a smaller number of kills," the IG wrote.

The report offers no recommendations and was provided to Pearce and FWS Director Dan Ashe for any action he deems appropriate.

Mexican wolves were once common throughout the Southwest, but there are fewer than 100 left in the wild. All but eradicated from the wild by the 1970s, the wolves were bred in captivity, and then 11 were released in 1998 on an experimental basis. The descendants of those captive-bred wolves are now confined to southern New Mexico and Arizona.

In response to a settlement agreement with conservation groups and states, FWS is working to update a decades-old recovery plan for the Mexican wolf (Greenwire, April 27).

Pearce and other Southwestern lawmakers would like to effectively block that effort.

The New Mexico Republican and Rep. Paul Gosar (R-Ariz.) last June introduced legislation, H.R. 2910, that would remove the patchy black, brown and cream-colored subspecies of the gray wolf from the endangered species list. While that bill hasn’t moved through the committee process, Gosar successfully attached a Mexican wolf delisting rider to the Interior-U.S. EPA spending bill that passed the House yesterday.