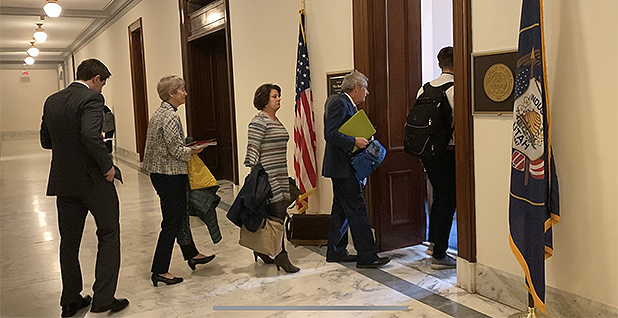 Volunteers from Citizens’ Climate Lobby spent a day on Capitol Hill to highlight the importance of climate action from Republicans.

"It would mean a lot to hear that leadership coming from both the executive branch as well as our elected representatives in Congress," said volunteer Andrea Zink. "I think we need all of them on board engaging in a solution."

She also went to the Tennessee Tuesday event in the Capitol, where Sen. Marsha Blackburn was in attendance. Zink said her conversations were positive, and she saw serious interest in solutions.

Most have done away with climate science denial, instead talking up clean energy innovation as a way to reduce greenhouse gas emissions without drastically scaling back fossil fuels.

Still, Daniel Palken, co-leader for Colorado’s CCL chapter, said he would like to see Republicans speak louder and be more muscular on the issue.

Palken, 28, of Boulder, spoke with staffers for Sens. Cory Gardner of Colorado, John Barrasso of Wyoming and Mitt Romney of Utah, as well as Rep. Russ Fulcher of Idaho.

"We’re in this room not to berate the politician but to try to work together to try to push nonetheless for more aggressive climate solutions than we’re currently seeing from many but not all Republican offices," Palken said.

Tyler Gillette, 24, of Columbus, Ohio, also witnessed a shift in discussions with Republican legislators on climate issues. Gillette visited the offices of Sens. Rob Portman of Ohio and Ron Johnson of Wisconsin and of Ohio Reps. Brad Wenstrup and Troy Balderson.

"They definitely want to take a lead role in climate," Gillette said. "They’re trying to find climate-related solutions that everyone can support, whether it be our bill or [other] climate-related bills, because we need something."

Gillette spoke with GOP members about a carbon fee-and-dividend bill known as the "Energy Innovation and Carbon Dividend Act," H.R. 763, which CCL has long lobbied for in Congress.

CCL conservatives said GOP leaders, including President Trump, are losing out on expanding their base by not addressing climate head-on.

Trump has made skeptical comments about climate science over the years — at one point calling climate change a "hoax" — but CCL conservatives said they wish the commander in chief would do more.

During last night’s State of the Union address, the president touched on energy and some environmental concerns but didn’t mention climate.

"The president is missing an opportunity on the climate issue to do something which is in line with conservative values and to make our nation stronger and better," Palken said.

Gillette added that Trump "should touch on it," but "he’s probably too busy with everything else." If the GOP continues to downplay climate issues, Gillette said, it will see the consequences in future election cycles.

‘Our voice should be heard’

In November 2019, the Pew Research Center released a poll showing that higher percentages of millennial Republicans believe the federal government is not doing enough on climate.

It’s one of many studies in recent months showing that younger voters are concerned about man-made climate change, and Republican lawmakers have started to take notice.

Energy and Commerce ranking member Greg Walden (R-Ore.) noted the results of several such surveys in a private presentation he gave to other House Republicans last month urging them to develop a climate message (E&E Daily, Jan. 17).

"I certainly feel very strongly that our voice should be heard and represented on this issue, because our generation is really going to be affected by inaction if we don’t address these issues now," Zink said.