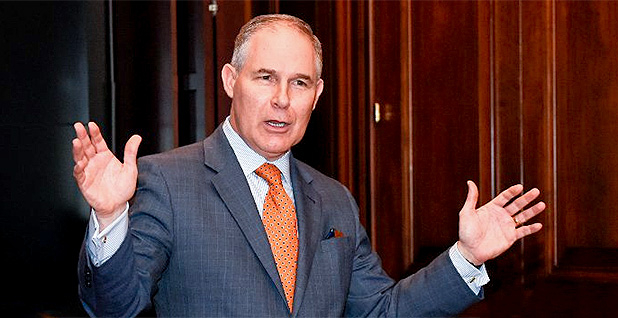 U.S. EPA boss Scott Pruitt is under fire from some conservatives who think he's playing it safe. Photo courtesy of @EPAScottPruitt via Twitter.

Infighting over the Trump administration’s climate agenda is spilling out into the open.

The war is being waged behind the scenes at both the White House and U.S. EPA, where the Trump administration’s conservative flank is sparring with officials pushing a more moderate approach when it comes to bulldozing the Obama administration’s climate policies, according to sources close to the administration.

Chalk one up for the moderates in the latest battle over an executive order on climate change — due to be signed by President Trump later this afternoon (Greenwire, March 27).

Notably absent from the order is action on two major Obama-era climate policies: U.S. participation in the Paris climate change deal and the so-called endangerment finding that allows EPA to regulate greenhouse gases under the Clean Air Act.

Some conservatives want the administration to reverse course on both those policies, and were quick to note their omission from the executive order.

EPA Administrator Scott Pruitt is taking heat from some on the right, who say he’s behind the decision not to tackle EPA’s endangerment finding.

Pruitt himself removed a directive to repeal that finding and refused entreaties to put it back in, according to a source close to EPA who heard it from several agency employees. Some of Pruitt’s critics say he’s seeking to avoid certain controversies in anticipation of a 2020 Senate bid in Oklahoma (Greenwire, March 24).

"The disappointment is equal parts missed opportunity and what it signals," the source said of the omission of the endangerment finding.

Pruitt hasn’t publicly commented on his post-EPA plans. An EPA spokesman did not respond to a request for comment for this story.

A story published yesterday by Breitbart News Network, a website previously run by Trump’s chief strategist, Steve Bannon, accused Pruitt of "failing to drain the swamp at the EPA." The article cites rumors that Pruitt removed the reference to the endangerment finding from the executive order.

Pruitt and his aides have been clashing with some Trump political aides who served on EPA’s transition team. The White House’s liaison to the agency has been shut out of meetings by Pruitt, and a top transition aide publicly resigned from his job, citing a "lack of loyalty" to Trump at EPA (Greenwire, March 20).

One source close to the administration said there are two groups dealing with environmental issues on Trump’s team. One camp is "conservative but pragmatic," and includes some former George W. Bush administration staffers and longtime Capitol Hill aides.

"Then you have others that are very conservative that come out of the think tank community, and I might loosely call those ideologues. And the ideologues don’t trust the pragmatists," that source said.

There has also been a split on Trump’s team about how to handle the Paris deal. Trump promised on the campaign trail to remove the United States from the agreement but has since said he would keep an "open mind" on the accord.

"In terms of the Paris Agreement, whether we stay in it or not is still under discussion," a White House official told reporters yesterday.

"The two most important decisions yet to be announced are to withdraw from the Paris Climate Treaty and to re-open the EPA’s Endangerment Finding," Ebell said in a statement. "It is important to understand that all these policies are closely connected and that striking down most but not all of them will not be sufficient to undo the damage done by President Obama’s energy-rationing policies."

Ebell said today in an interview that he expects the Trump administration to ultimately withdraw from the Paris deal and rescind the endangerment finding, even though those policies aren’t addressed in today’s order.

Ebell told E&E News in an interview last month that the Trump team should aim to transform EPA so profoundly that the next administration can’t easily come in and reverse course.

He cited the possible election of Sen. Elizabeth Warren (D-Mass.), who is seen as a Democratic contender for the White House in 2020. "If we have President Warren four years from now, her EPA won’t go forward and say, ‘Well, we took a four-year break, but we’re going back to exactly the same approach of doing climate policy through regulation, not through Congress,’" Ebell said last month.

Withdrawing the endangerment finding would be a central component to that strategy, he said. "Then everything falls" when it comes to the climate policies built on that finding, he said. That would require another administration, he said, to "start from scratch, and that would take years" (Greenwire, Feb. 6).