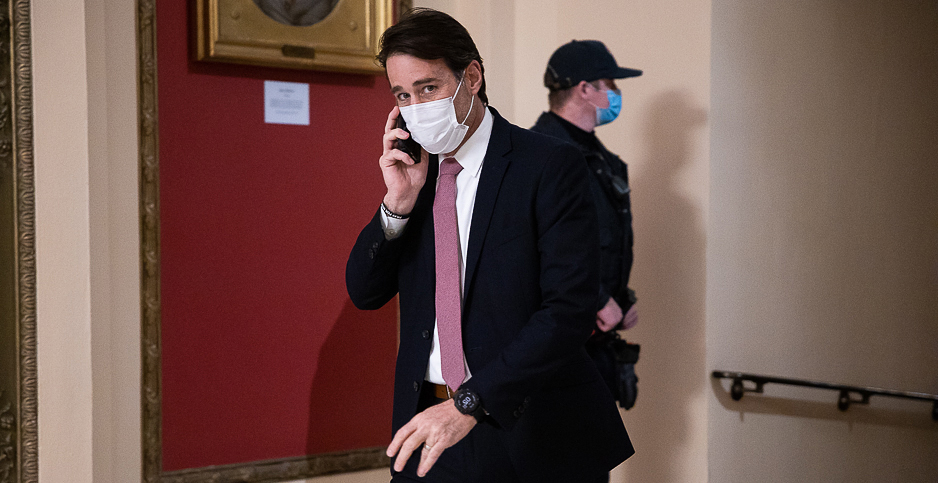 The oil industry’s embrace of pricing carbon dioxide emissions is getting the cold shoulder from conservatives and congressional Republicans.

Despite hopes that industry support for a carbon price might help Republicans see merit in more ambitious climate policy, GOP lawmakers and conservative groups were critical of API and gave little indication that they would back carbon pricing anytime soon.

"This will lead to higher electricity bills and gas prices for American consumers," Barrasso added. "Spiking Americans’ energy costs while our economy recovers from a global pandemic is a disastrous idea."

Political moderates and the business community have long touted carbon pricing as a Republican-friendly idea that could make climate policy bipartisan. A coalition of right-leaning carbon tax groups has popped up over the years, but the policy has never taken hold among congressional Republicans.

Only a handful of Republican lawmakers currently support or are open to the idea — including Rep. Brian Fitzpatrick (R-Pa.) and Sens. Mitt Romney (R-Utah) and Lisa Murkowski (R-Alaska) — but it’s far from enough to overcome the Senate filibuster. Other Republican supporters, such as former Florida Reps. Carlos Curbelo and Francis Rooney, have left office.

Senate Republicans also unanimously backed an amendment last month that would have banned federal carbon taxes during debate on the blueprint for COVID-19 stimulus.

In a separate interview yesterday, Graves struck a different tone, saying he was unsurprised but unmoved by the announcement.

"Some of the key member companies have been out working and meeting individually with offices, including us, for, actually, a few years," Graves told E&E News, adding that carbon pricing has "fundamental flaws."

Graves, who represents oil-rich Louisiana, was among the top recipients of campaign contributions from oil and gas company employees and political action committees in the 2020 election cycle, according to data compiled by the Center for Responsive Politics. Barrasso was similarly among the top Senate recipients for the industry when he was last up for reelection in the 2018 cycle.

"Luckily, we don’t represent companies; we represent people," Graves said. "And I think it’s important to keep in mind that the majority of companies that are driving this for API are multinational companies that I think are responding to pressure from other places."

That tension has bubbled up within the industry, as well. While oil majors with global operations have voiced support for carbon pricing in various forms over the past several years, many independent producers remain opposed.

There are also an array of influential conservative groups that are staunchly opposed to carbon pricing. They sent a letter to lawmakers earlier this month making their views clear.

"Voters across the country have firmly rejected carbon taxes, even in blue states," John Kartch, vice president of communications for Americans for Tax Reform, said in an email. "This won’t change."

Environmental groups were also unimpressed by API’s new position and skeptical of the oil lobby’s motivations.

Natalie Mebane, associate director of policy at 350.org, accused the industry of "green washing" with its new policy pronouncement.

"Whatever they choose to do, it’s not going to be anything that actually makes a difference," Mebane told E&E News.

"But they can score some PR points, they can stop being seen as the bad guy, and they can start feeling and saying that they are part of the solution, so that they can continue on with their extraction for as long as humanly possible — because they’re afraid that if they don’t comply with something that seems reasonable, they’re going to get actual top-down regulation and be essentially put out of business."

She said carbon pricing by its very nature is inadequate for fighting climate change, because it allows companies to continue to produce and consume fossil fuels and doesn’t account for the environmental justice implications of their continued operations, such as communities of color that are affected by pollution from refineries and power plants. It also increases energy prices, which can be a disproportionate burden on people with the lowest incomes.

"Anything that does not stop the burning of fossil fuels, and does not have a complete clean energy transition and revolution, where we’re not reliant on fossil fuels for any part of our economy, isn’t going to actually do anything," Mebane said.

"API is trying desperately to distract the Biden administration from the crucial work of keeping polluting fossil fuels in the ground," said Kassie Seigel, the center’s director of climate law.

"Biden must not allow rich oil companies to escape climate accountability with yet more self-serving green washing announcements. Instead, the president should declare a climate emergency and permanently halt the leasing of public land for drilling and fracking."

API’s shift followed a move earlier this year by the U.S. Chamber of Commerce to support "market-based" climate policies, which it said could including carbon pricing.

"The Task Force heard an update from Advisor McCarthy and had an opportunity to share the business community’s perspective on climate and desire for bipartisan and durable legislative solutions," Marty Durbin, president of the Chamber’s Global Energy Institute, said in a statement. "We look forward to continued dialogue with the Administration on our shared goals, and anticipate continued productive engagement as it prepares for the United Nations COP-26 meeting in Glasgow later this year."

‘Devil is in the details’

To be sure, not all reactions to API’s policy were negative.

In a release put out by API, Texas Rep. Henry Cuellar, one of the most vocal House Democrats supporting the oil and gas industry, called the move "an important step by the industry in working to address the risks of climate change while continuing to produce reliable, affordable American energy."

ConservAmerica said API is rising to the challenges of climate.

"Fundamentally different than any environmental challenge we have faced, climate change is global in its reach and economy-wide in its breadth; the regulatory mechanisms of the past are not sufficient to address GHG emissions of today or the future," ConservAmerica President Jeff Kupfer said in the same release.

"API’s statement addresses these realities and provides a pathway for an efficient, comprehensive, and durable approach to reduce emissions."

The question now is what kind of lobbying effort the industry puts into carbon pricing and whether it would be willing to compromise on the details, said Sen. Sheldon Whitehouse (D-R.I.), one of the industry’s top congressional critics.

"API’s policy principles suggest that it will only support a price on carbon that is held artificially low by the same accounting tricks Scott Pruitt’s EPA used to discount the social cost of carbon," Whitehouse said in a statement to E&E News. "Not a good sign."

API’s newly released climate policy principles say, "The carbon price should not exceed the marginal cost of carbon emissions or the cost caused by an additional ton of carbon emitted into the atmosphere."

They also propose to disclose federal carbon pricing at the retail point of sale for transportation fuels, meaning consumers would be told about the tax or fee at the pump.

"API’s decision to support carbon pricing is a positive — and long overdue — step forward," Whitehouse said. "However, the devil is in the details."