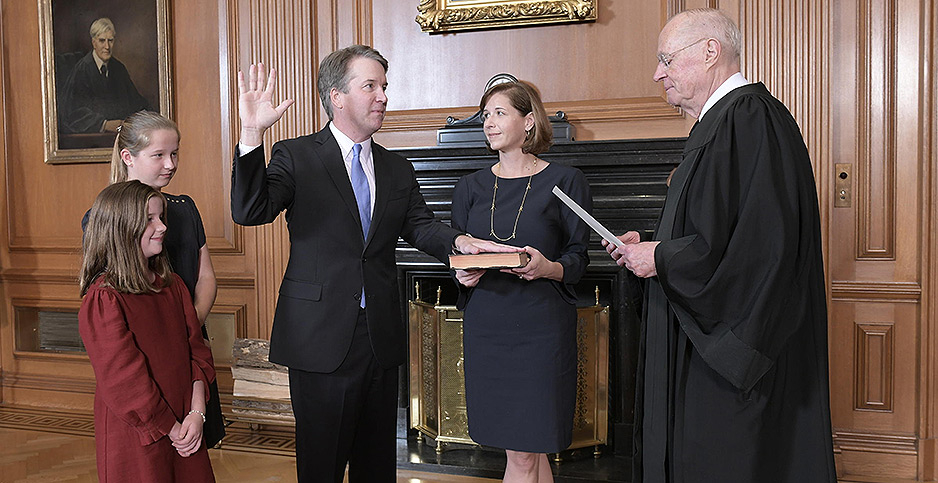 Conservative lawyers are mapping out the next environmental battles they want to wage before the newly constituted Supreme Court.

With Brett Kavanaugh sworn in Saturday for a lifetime appointment, many groups are eager to cash in on the court’s distinct swing to the right.

On environmental issues, that means a potential uptick in cases involving property rights, agency power and cornerstone environmental laws including the Endangered Species Act and the Clean Water Act.

Myron Ebell of the Competitive Enterprise Institute said the first order of business will be defending the Trump administration’s deregulatory actions before the high court.

"I was confident that most of them would be eventually upheld, but I’m more confident today with Kavanaugh joining the court," he said.

Jonathan Wood, an attorney with the conservative Pacific Legal Foundation, said the fight over the Obama-era Waters of the U.S. rule, or WOTUS, is likely to find its way back to the Supreme Court, too.

Now-retired Justice Anthony Kennedy wrote the 2006 Supreme Court opinion relied upon for years to guide the federal government’s jurisdiction over various wetlands and waterways. A firmly conservative court may prefer the more limited approach favored by the Trump administration.

Another big issue: judicial deference to agencies. Conservatives and libertarians have been gunning for the Chevron doctrine, a long-standing Supreme Court precedent that directs judges to defer to agency judgments in many cases.

"There’s very little doubt in my mind that Chevron deference is going to get breached here shortly," Republican energy lobbyist Mike McKenna said, noting it will open the floodgates to "any lawyer who’s ever been pissed off with any agency interpretation" to return to court to plead their case.

Conservatives are also more optimistic that possible moves to revoke the Clean Air Act waiver that allows California to set tougher greenhouse gas standards for cars would be held up by the high court.

"I was confident that the revoking [of the waiver] would be upheld in court," said Ebell, who led the EPA transition team for the Trump administration. "I’m more confident now."

Environmentalists will largely try to steer clear of the high court.

Many green groups opposed Kavanaugh’s nomination from the start, citing his trademark skepticism toward regulations and a sparse record of siding with environmentalists in his time on the U.S. Court of Appeals for the District of Columbia Circuit.

After Kavanaugh’s angry Senate testimony in which he accused "left-wing opposition groups" of orchestrating a political hit on him, some are convinced he’ll be openly hostile to liberal organizations appearing before the court.

"I think certainly Democrats and many others are worried about temperament and impartiality in light of the screed a week ago," said University of Richmond law professor Carl Tobias, an expert on judicial nominations.

UCLA environmental law professor Ann Carlson, who signed on, said partisan decisionmaking could play a role in legal battles over key Trump administration efforts to prop up the coal industry or roll back clean car standards.

"An open partisan on the Court could factor into his decision the spin the Trump Administration could put on pro-coal victories, allowing Trump to claim that he is reversing the war on coal," Carlson said in an email.

Even the perception of unfair treatment by Kavanaugh would serve to erode the public’s confidence in the Supreme Court, Carlson added.

"The public’s view of the Court’s independence is already precarious given the number of 5-4 votes in highly changed cases, split along ideological lines," she said. "I worry that — given Kavanaugh’s openly partisan performance — the perception that the Court is just another political body may increase.

"Environmentalists will need to take all this into account in making strategic litigation decisions," she added.

Green groups have limited options for working around the makeup of the Supreme Court.

If they’re involved in a particular case and concerned about bias, they could ask Kavanaugh to recuse himself. But justices are free to reject such requests at their discretion and without explanation.

"One thing [litigants] can do is to ask him to recuse in cases where they feel he won’t be impartial or fair, or is partisan against their position," Tobias said. "The problem with that is there’s a statute that governs that in the lower federal courts but does not at the Supreme Court. So the justices are pretty much free agents to decide whether they even want to respond to that, and if so, how."

Kavanaugh wrote a Wall Street Journal op-ed saying he was "too emotional" at times during the testimony but vowed to be an "even-keeled, open-minded, independent" justice.

Environmentalists’ safest bet: avoid the Supreme Court when they can.

"That isn’t new but will be an even more appealing strategy as the court shifts to the right," said Dan Farber, a University of California, Berkeley, law professor who also signed the letter questioning Kavanaugh’s temperament.

When they do land before the high court, left-leaning groups may frame their arguments with an eye toward a narrow ruling that could win over Chief Justice John Roberts. Robert Percival, head of the environmental law program at the University of Maryland, said certain cases with unique alliances between environmentalists and business interests may fare better for the left.

One such case: a battle over an EPA regulation for powerful greenhouse gases known as hydrofluorocarbons. The Obama administration moved to restrict the use of the substance, but the D.C. Circuit tossed the standards. Environmentalists and manufacturers of HFC replacements are aligned in pushing to revive the regulation.

Kavanaugh wrote the D.C. Circuit opinion for that case, so he is not expected to participate in Supreme Court proceedings. The justices will announce tomorrow whether they have agreed to review the dispute.

Sworn in less than 48 hours ago, Kavanaugh is already steeped in the cases pending before the court. He is expected to sit for oral arguments for the first time tomorrow, hearing a pair of criminal law cases.

Experts noted that despite his contentious confirmation process, Kavanaugh will likely have a smooth transition to the court.

"I think that there won’t be much by way of conflicts," Tobias said. "They just welcome new colleagues and realize the [confirmation] process is not very good, and some of them probably think their processes weren’t very fair either."

A former Supreme Court clerk, who declined to be named because he still argues before the court, said some of the liberal justices may remain "professional but guarded" with Kavanaugh, just as they would with any of President Trump’s nominees. But he doesn’t expect major friction.

"I don’t think the controversy … will materially change his personal relationships with other justices — he’s a smart, movement conservative type who’ll be of a piece with [Justice Samuel] Alito on lots of stuff," the former clerk said.

In a speech at the American Academy of Arts and Sciences yesterday, Justice Sonia Sotomayor commented on the notion that the court’s reputation has been damaged by the circumstances of Kavanaugh’s confirmation.

"I think there are many who fear that, and I think our image is the thing that we have to guard most jealously as a group," she said. "And for that it requires us to be working together in a way in which we uphold the sense of integrity of the court, and I believe that every member who comes to the court very quickly becomes indoctrinated in understanding how important our role is."