Conservatives want this ex‑regulator to be CEQ boss 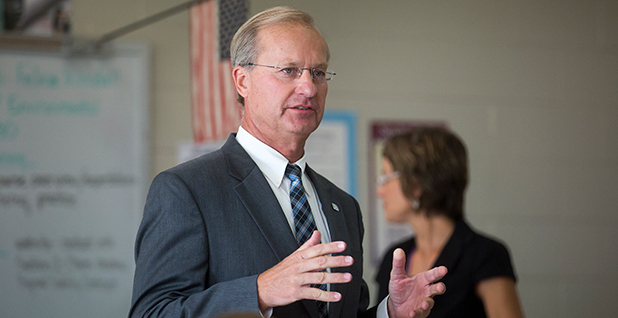 Climate skeptics are rallying from a recent defeat by promoting another candidate who has questioned humans’ role in climate change for a top White House environment job.

"The difference between him and her is he doesn’t have a long history of radioactive comments," said Myron Ebell, director of the Center for Energy and Environment at the Competitive Enterprise Institute, who supported Hartnett White’s nomination but is now promoting van der Vaart for the job. "It’s not surprising that her nomination had a few bumps and came to a bad end."

Tim Huelskamp, president of the Heartland Institute, which rejects mainstream climate science, is another fan of van der Vaart.

"Donald Van der Vaart would be an excellent addition to Trump’s reform-minded administration," Huelskamp said in a statement. Huelskamp said the White House should move quickly on a nominee, saying its many vacancies have handicapped Trump’s agenda.

But the White House doesn’t appear eager to advance another nominee amid a legislative push to significantly change permitting rules CEQ oversees (Climatewire, Feb. 13). Many within the administration believe acting chief Mary Neumayr is capable of handling the job in the interim and don’t want to get bogged down in a fight over climate science with Democrats.

Van der Vaart could ignite such a fight. While his track record on climate is less explosive than that of Hartnett White — who said fossil fuels helped end slavery and called carbon dioxide the "gas that makes life possible" — he still questions the role humans play in warming the planet.

In an interview with E&E News yesterday, he demurred when pressed multiple times on whether he thinks humans are "significantly" contributing to climate change.

"The question is, how well do we understand this process — and that includes the amount of global warming that’s attributable to mankind — and also what are the mechanisms?" van der Vaart said. "My interest would be to see more research done in the understanding of global warming. But I’m also interested in seeing our power sector continue to get clean. I’m a big proponent of nuclear power, not only because of [carbon dioxide] but there’s also no [sulfur dioxide].

"I certainly think mankind contributes," he added. "How and how much is something I’d like to have more answers on and more accuracy."

If that sounds much like U.S. EPA Administrator Scott Pruitt’s position, that’s perhaps not surprising. Van der Vaart holds similar philosophies to Pruitt, a polarizing figure viewed as a boogeyman by Democrats and environmentalists and a stalwart of conservative ideals by the right and industry.

"Don is a well-thought-of name by people who matter in the administration," said energy lobbyist Mike McKenna.

In what’s likely a promising sign to some conservatives, van der Vaart appears willing to review EPA’s endangerment finding on greenhouse gases, an anthology of climate science that forms the legal justification for regulating heat-trapping emissions. He argued that the finding should be constantly updated as science progresses.

"I think whenever there’s a significant alteration from [the Intergovernmental Panel on Climate Change] or somebody — this is no different than any health-based standard," van der Vaart said.

Climate scientists contend that opening up the science would ultimately yield a win for the overwhelming body of evidence that shows humans are largely responsible for a warming planet.

Van der Vaart said the culmination of a "red-team, blue-team" review of climate science could "warrant a revisitation of the endangerment finding." Pruitt has been pushing such a science review, and many conservatives hope that would yield an opportunity to unravel the Obama-era scientific finding.

Van der Vaart said he supports an exercise to review climate science, though he didn’t describe how it should be designed. The idea is controversial, as detractors worry it would give false equivalence to minority views on climate science.

The White House has said such a debate is on hold, which officials reiterated to Pruitt in a meeting last Friday with President Trump, according to sources.

‘It would be a thrill’

A relative unknown in Washington, D.C., circles, van der Vaart nonetheless was in the running to lead EPA and later was interviewed to be Pruitt’s deputy administrator (Greenwire, Dec. 5, 2016). That nomination eventually went to Andrew Wheeler, a former lobbyist and ex-aide to Sen. Jim Inhofe (R-Okla.). Van der Vaart also served on the EPA transition team.

"I just called him up out of the blue," said Ebell, who led the EPA transition team. "I said these [goals] include, of course, abolishing the EPA, and he said, ‘Sign me up!’ That was somewhat tongue-in-cheek — we recognize that abolishing the EPA is not going to happen, at least in the first Trump [term]."

A chemical engineer with a doctorate from the University of Cambridge in England, van der Vaart in November 2016 urged Trump to reduce EPA’s scope and argued for repealing a section of the Clean Air Act ensuring compliance with emissions rules. Pruitt later named him to EPA’s Science Advisory Board while van der Vaart was still at North Carolina’s Department of Environmental Quality — he had demoted himself to avoid a political firing. He resigned from the agency after the state’s new leadership questioned his participation on the EPA advisory board.

That legal and regulatory lens is important for CEQ, as it plays a crucial role in interpreting the National Environmental Policy Act, which underpins permitting decisions across agencies. Van der Vaart said he thinks NEPA needs scaling back in part because laws and regulations enacted after NEPA — such as the Clean Water and Clean Air acts — have expanded the regulatory state.

"There is a lot of redundancy in these permitting reviews," van der Vaart said. "I would try to push more down on the state. And then the other part of this is truly managerial. [CEQ has] always been such a clearinghouse, but there needs to be more active coordination among the agencies."

"With his Ph.D. in chemical engineering, he has an extremely qualified background both in science and in law," Huelskamp said. "Plus his 20 years of experience in state government, including as secretary of environmental protection in North Carolina, he understands well how the states need to take a more purposeful role as stewards of the environment."

Van der Vaart’s critics, however, said his time as North Carolina’s top environment cop underscores the dangers of handing greater authority to states, something Pruitt has also advocated. They accused van der Vaart of being too cozy with industry and slammed his handling of coal ash spills and water pollution from hog operations, charging van der Vaart ignored science that urged swifter action.

"We felt he did more to protect polluters than North Carolina’s environment," said Nat Mund, director of federal affairs with the Southern Environmental Law Center.

Whether van der Vaart will have a role in the administration’s environmental policies isn’t up to him. Regardless, he’s pleased to be pushed for the job.

"It would be a thrill for somebody like me who’s been in this field for a long time," he said.