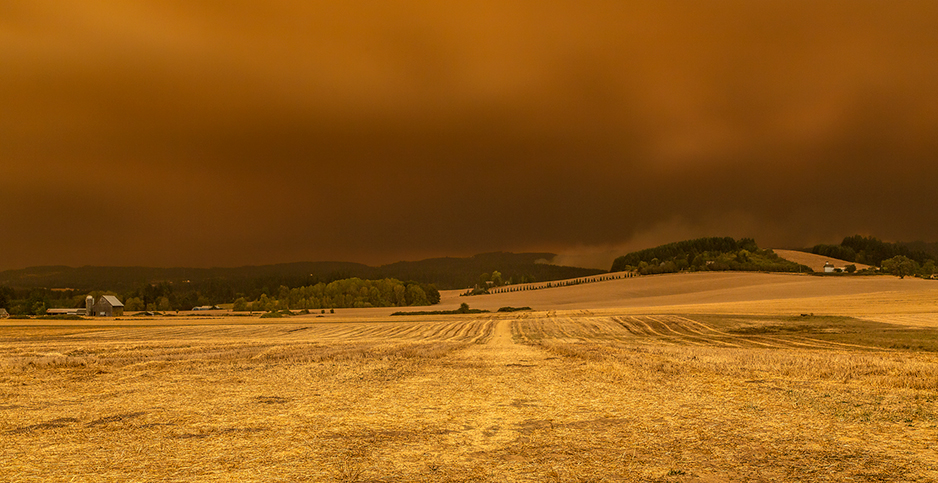 Wildfires continued their march across the West yesterday, forcing the evacuation of 500,000 Oregonians, incinerating an area the size of New Jersey and forcing officials to confront conspiracy theories.

More than 7,100 square miles in the West is ablaze, thousands of homes and structures have been incinerated, and at least 15 people have died.

The fires’ speed and intensity astonished even battle-hardened wildfire experts.

The most dangerous appear to be the North Complex fires, which exploded this week northeast of Sacramento. There were 10 confirmed deaths from those fires in just two days, and rescue crews are searching for more than a dozen missing people.

A shroud of toxic smoke is smothering the state. In the San Francisco Bay Area, officials issued their 25th straight "Spare the Air" alert urging people to cut back on activities that contribute to air pollution. It is the longest streak since the program began in 1991.

Meteorologists said winds and a marine layer helped protect large parts of the state from the smoke and turned skies from red to gray yesterday.

A respite in Northern California may not come until next week, when rain and onshore ocean winds are in the forecast. Those will likely push the smoke east into Nevada, Idaho, Utah and Colorado.

President Trump, who has largely remained silent this week on the fires, signed emergency declarations for Oregon and California. He spoke with California Gov. Gavin Newsom (D) yesterday, according to a White House spokesman.

Trump talked with the governor "to express his condolences for the loss of life and reiterate the administration’s full support to help those on the front lines of the fires," White House spokesman Judd Deere told the Associated Press.

Small towns like Phoenix, Ore., population 4,500, have been torched, and at least four Oregonians have died.

In Talent, Ore., Dominick DellaSala, a forest ecologist who has written on the benefits of naturally occurring forest fires, returned home after three days of evacuation and found his home intact amid blocks of destruction around him.

On the 6-mile return drive, DellaSala said, he saw "utter carnage," which he blamed largely on poor preparation that left homes surrounded by dense vegetation. Propane tanks near trailer homes contributed to the fires’ intensity, he said.

"None of these homes were hardened for fire protection, from what I can tell," said DellaSala, chief scientist at Wild Heritage.

DellaSala and other advocates have been pushing state and federal officials for years to emphasize designing communities to be more fire-resilient, accepting that fire is a part of life in the West. Wildfire that destroyed Paradise, Calif., two years ago should have been a bigger wake-up call, they’ve said.

"Elected officials have known about this potential for years — we’ve been warning them about home hardening, escape routes, defensible space as the priority in a changing climate, and no one has listened," DellaSala said. "Southern Oregon is now the new Paradise, unfortunately."

Farmers, too, are seeing impacts, although those won’t be known in full for some time, said Dave Kranz, a spokesman for the California Farm Bureau Federation, a trade group. Grazing livestock, always a concern with wildfires, don’t seem to have suffered much loss, he said.

One type of agricultural business — vineyards — may be taking the biggest hit. With wine grape harvests underway, vineyard operators are worried about the off-taste that smoke can lend to wine, Kranz said. Labs that test for such effects have a backlog of requests from growers, he said.

Oregon officials have also had to debunk online conspiracy theories blaming far-right and far-left groups for starting the fires.

"Remember when we said to follow official sources only?" the Douglas County Sheriff’s Office in Oregon wrote on Facebook. "Remember when we said rumors make this already difficult incident even harder? Rumors spread just like wildfire and now our 9-1-1 dispatchers and professional staff are being overrun with requests for information and inquiries on an UNTRUE rumor that 6 Antifa members have been arrested for setting fires in DOUGLAS COUNTY, OREGON."

Similarly, the Medford Police Department in Oregon posted that it had not arrested any antifa — short for "anti-fascist" — or Proud Boys activists.

Officials cautioned that they are investigating the sources of the fires. And they advised residents to use common sense.

"These investigations take time," said Mike Moran, a spokesman for the Jackson County Sheriff’s Office. "They’re intense. They’re fast moving. And so people ought to consider: ‘Does this even make sense?’ They should question anything they see in a social media setting."